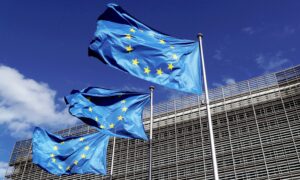 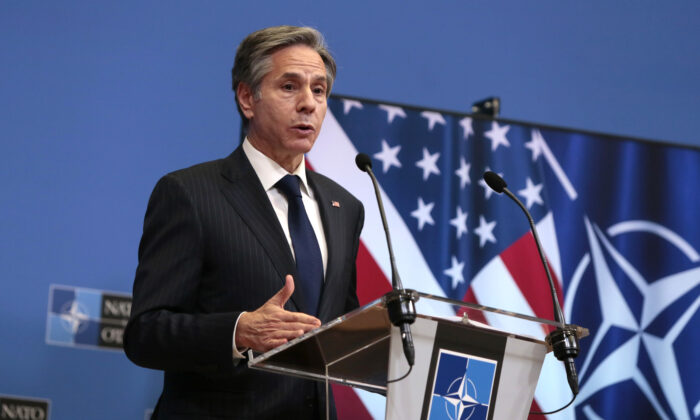 U.S. Secretary of State Antony Blinken speaks during a media conference after a meeting of NATO foreign ministers at NATO headquarters in Brussels on March 24, 2021. (Virginia Mayo/Pool/AP Photo)
Executive Branch

BEIJING/OTTAWA—The United States on March 27 condemned Beijing’s sanctions against two U.S. religious-rights officials and a Canadian lawmaker amid a dispute over Beijing’s treatment of Muslim Uyghurs and other minorities.

China’s moves “only contribute to the growing international scrutiny of the ongoing genocide and crimes against humanity in Xinjiang. We stand in solidarity with Canada, the UK, the EU, and other partners and allies around the world in calling on the (China) to end the human rights violations and abuses,” U.S. Secretary of State Anthony Blinken said in a statement.

He condemned the sanctions.

We condemn the People’s Republic of China’s sanctions on two members of the independent and bipartisan @USCIRF. Beijing’s attempt to silence criticism of serious human rights abuse in Xinjiang only contributes to growing international scrutiny.

“Amid growing international condemnation, the PRC continues to commit genocide and crimes against humanity in Xinjiang,” the U.S. State Department said last week,

Beijing’s sanctions followed those imposed by the United States, European Union, Britain, and Canada earlier this week for what they say are violations of the rights of Uyghurs and other ethnic or religious minorities in the western Chinese region of Xinjiang.

Activists and U.N. rights experts say at least a million Uyghurs have been detained in camps in Xinjiang. Witnesses and their friends and families say the Chinese communist regime subjects Uyghurs and other dissidents to torture, forced labor, and sterilizations.

Beijing has repeatedly denied all accusations of abuse and says its camps offer “vocational training” and are needed to “fight extremism.”

China sanctioned Canadian opposition lawmaker Michael Chong, vice chair of parliament’s Standing Committee on Foreign Affairs and International Development and its Subcommittee on International Human Rights, which this month presented a report concluding that atrocities in Xinjiang constitute crimes against humanity and genocide.

Beijing also said it will take measures against the chair and vice chair of the U.S. Commission on International Religious Freedom (USCIRF), Gayle Manchin and Tony Perkins. Manchin is the wife of Sen. Joe Manchin (D-W.Va.) and Perkins is also president of the conservative Christian advocacy group Family Research Council.

The individuals under Beijing’s sanctions are banned from traveling to China, Hong Kong, and Macau, and Chinese citizens and institutions are prohibited from doing business with them or having any exchanges with the subcommittee.

“The Chinese government is firmly determined to safeguard its national sovereignty, security and development interests, and urges the relevant parties to clearly understand the situation and redress their mistakes,” the Chinese foreign ministry said.

“They must stop political manipulation on Xinjiang-related issues, stop interfering in China’s internal affairs in any form and refrain from going farther down the wrong path. Otherwise they will get their fingers burnt.”

USCIRF’s Manchin, in an email to The Epoch Times, said she’s “flattered to be recognized by Communist China for calling out genocidal crimes against religious and ethnic minorities in the country.”

She added, “While I don’t have plans to travel to China this summer, I won’t stop speaking out when egregious violations of religious freedom are taking place as they are in China.”

Beijing’s previous sanctions on U.S. individuals who it says have seriously undermined China’s sovereignty and interests on Xinjiang-related issues remain in effect.

Chong, who is a member of the opposition Conservative Party in Canada, said he would “wear (the sanctions) as a badge of honor.

“This demonstrates that parliamentarians are being effective in drawing attention to the genocide of the Uyghur people that is taking place in western China,” Chong said in a telephone interview.

Chong urged the Trudeau government to “officially recognize the Uyghur genocide”; he added that the sanctions would have no practical effect because he had no plans to travel to China.