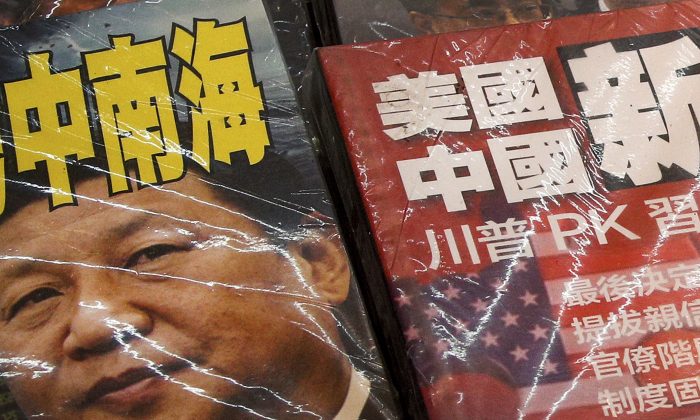 In this Thursday, July 4, 2019, photo, magazines with a front cover featuring Chinese leader Xi Jinping with South China Sea and Xi against U.S. President Donald Trump is placed on sale at a roadside bookstand in Hong Kong. The United States said it's concerned by reports of China's interference with oil and gas activities in the disputed waters of the South China Sea, where Vietnam accuses Beijing of violating its sovereignty. (Andy Wong/AP)
Asia & Pacific

US Concerned Over China’s ‘Interference’ in South China Sea

HANOI, Vietnam—The United States said it’s concerned by reports of China’s interference with oil and gas activities in the disputed waters of the South China Sea, where Vietnam accuses Beijing of violating its sovereignty.

Vietnam on July 19 demanded China remove a survey ship from Vanguard Bank, which it says lies within Vietnam’s 200-mile exclusive economic zone. China claims the South China Sea almost in its entirety and has rattled smaller neighbors by constructing seven man-made islands in the disputed waters and equipped them with military runways and outposts. However, on July 12, 2016, an arbitration court in The Hague found the Chinese regime’s claims to be false and having no historical basis.

Chinese coast guard vessels also have been reported near a drilling rig in the same Vanguard Bank area where Vietnam has contracted Russia’s Rosneft to develop gas fields.

“Vietnam has made contact with China on multiple occasions via different channels, delivered diplomatic notes to oppose China’s violations, and staunchly demanded China to stop all unlawful activities and withdraw its ships from Vietnamese waters,” Vietnam’s Foreign Ministry spokeswoman Le Thi Thu Hang said in a statement on Friday.

Chinese Foreign Ministry spokesman Geng Shuang earlier in the week told Hanoi “not to take any move that may complicate matters.”

In May 2014, Chinese and Vietnamese vessels engaged in a dangerous confrontation when China’s national oil company moved its oil platform into waters Vietnam considers its territory.

Ortagus calls on China to “cease its bullying behavior and refrain from engaging in this type of provocative and destabilizing activities.”