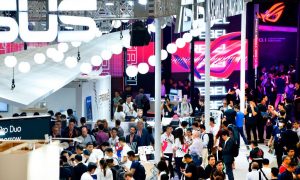 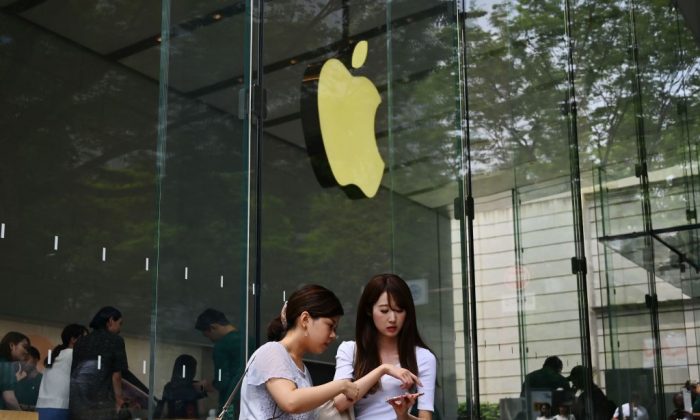 Women use their smartphones in front of an Apple store in Tokyo's Omotesando district on June 4, 2019. (CHARLY TRIBALLEAU/AFP/Getty Images)
US News

American firms continue to beat their global peers in market capitalization, thanks to the booming U.S. technology sector.

The market valuation of the top 100 companies worldwide nearly tripled in the last decade, and the United States continues to dominate the list with 54 companies, according to the latest Global Top 100 report released by the consulting firm PwC and Bloomberg.

China, the second-largest contributor to the list, had 15 companies.

“The US continued to see impressive growth in its share of the largest companies in value terms over the past 10 years,” the report stated.

The Global Top 100 list ranks the largest public companies in the world by their market valuation in U.S. dollars as of March 31. On this year’s list, U.S. companies represented 63 percent of overall value, up from 61 percent in 2018 and 45 percent 10 years ago.

This year, Microsoft has become the most valuable public company in the world for the first time, after a seven-year reign by Apple. The tech giant’s market value surpassed the $1 trillion mark in April and currently stands at $1.04 trillion.

Apple became the first U.S. company to hit the mark in 2018, but its current market value is $926 billion. Amazon also briefly joined the trillion-dollar club in 2018 but now has a value of $887 billion.

Microsoft’s market capitalization surged 29 percent year-on-year as of March 31, “fueled by its transformation into a cloud computing company,” the PwC and Bloomberg report stated. Apple’s market valuation increased by only 5 percent during the same period.

Chinese companies in the Global Top 100 list saw a decrease of $135 billion or 4 percent in market valuation year-on-year. This was due to increased volatility in both Shanghai and Hang Seng indices amid the growing trade war between the United States and China, the report stated, adding that the conflict took a toll on investor sentiment.

For the third year in a row, the technology sector dominated the global list. In terms of percentage increase, however, the health care, telecommunications, and consumer services sectors outperformed other sectors.

According to the report, Europe’s share in the Global Top 100 market capitalization dropped to 15 percent this year from 27 percent a decade ago, with 11 companies falling from the list over that period.

The report also listed top unicorns, which are privately held startup companies valued at more than $1 billion. There were more than 320 unicorns around the world as of March 31, according to the report.

The valuations of unicorns are determined by how much private investors and venture capitalists are willing to pay to acquire shares in these private companies. The largest unicorn, according to the report, was a Chinese internet company, Bytedance, with a valuation of $75 billion.

Nearly half of the unicorns around the world were from the United States, and 30 percent were from China, the report stated.