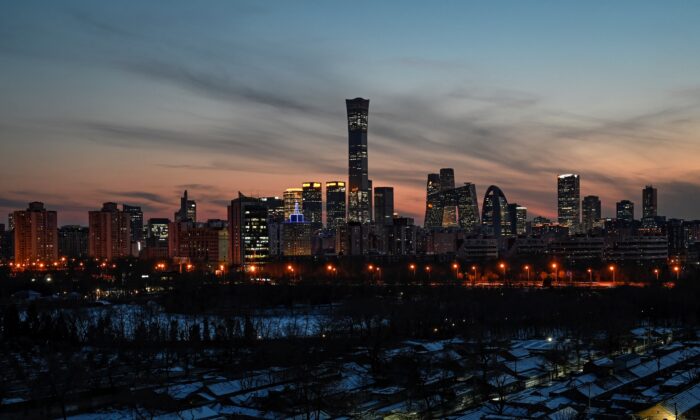 This general view shows the skyline over the central business district at sunset in Beijing, China on Feb. 16, 2022. (Jade Gao/AFP via Getty Images)
China Business & Economy

US Companies Are Pessimistic About Investing in China Although Profitable: Survey

The latest survey showed that U.S. enterprises in China could make a profit, but are less optimistic about investing there because of intense U.S.-China relations, China’s inconsistent regulations, inferior market access for foreign companies, increasing labor costs, and the extreme COVID-zero policy.

Fifty-nine percent of the survey respondents had increased profits in China in 2021, higher than the 35 percent reported in 2020. Yet, only one quarter of the enterprises planned to increase investment in the world’s second-largest economy by more than 10 percent. Over one-third of them said they would reduce investment due to China’s uncertain policy environment.

Although the companies are more pessimistic about China’s market, 83 percent said they weren’t considering relocating their production lines out of China, the survey showed.

The survey was done by the American Chamber of Commerce in China (AmCham) by sending a questionnaire to all  members from Oct. 22, to Nov. 19, 2021. Forty-nine percent (353 of the members) responded.

The survey asked questions to identify the difficulties the U.S. enterprises were facing in China.

Alan Beebe, the AmCham president, briefed the results of the survey to the media on March 8. He said that U.S.-China relations play a key role in American enterprise’s operations in China.

“There was a level of perhaps hope and optimism once Biden entered office that the relationship would improve,” Beebe said. “But I think what we’ve seen over the course of the last year is that there’s a new reality that has set in, where, largely speaking, many of the policies and sentiment of the Trump administration remain in place with the Biden administration.”

According to the survey, only 27 percent of the respondents had an optimistic expectation about U.S.-China relations, which is at the same level as when Donald Trump was the U.S. president and China and the U.S. had a trade war. The optimism rate was 45 percent in last year’s survey when it was announced that Joe Biden was to be the next president.

Beebe said in the media brief that more than three fourths of the respondents said that their qualified job candidates couldn’t move to China due to its COVID-19 zero policy, which made it hard for human resources to find enough employees to support their business development in China.

In last year’s survey, only 37 percent of qualified candidates refused to move to China.

China’s COVID policy strictly controls people’s movements. The regime locks down the cities where there are new COVID-19 cases, and quarantines people for at least 14 days who arrived from another country or were identified as having close contact with a COVID-19 patient.

Besides the difficulties of hiring people, more than half of the respondents said that China’s COVID-19 policy also led to higher costs of products and services.

Furthermore, more than 40 percent of the respondents mentioned that there was pressure to make or not make politically sensitive statements.

The Chinese regime doesn’t allow any enterprise or individual to act or comment on its rule. In 2021, Chinese e-commerce platforms and stores boycotted the products from H&M, Nike, Uniqlo, Adidas, GAP, FILA, New Balance, ZARA, and Under Armour when these brands refused to purchase cotton from Xinjiang.

In western China’s Xinjiang, forced labor, mainly Uyghur people who were detained by the regime, harvests the cotton. To avoid giving the regime a chance to persecute the forced laborers, the international brands refused to buy cotton from Xinjiang.