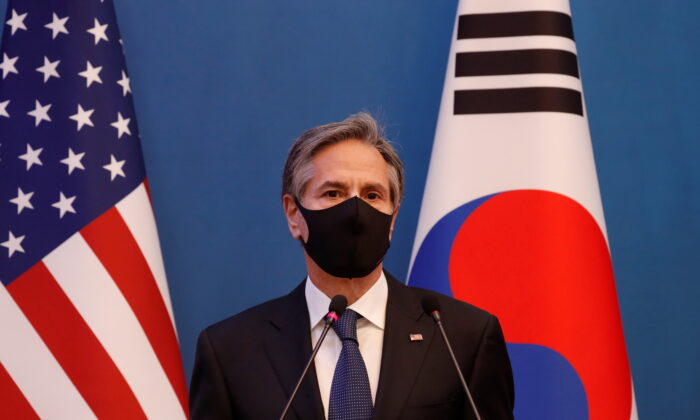 U.S. Secretary of State Antony Blinken speaks during a joint news conference after the Foreign and Defense Ministerial meeting between South Korea and the U.S. at the Foreign Ministry in Seoul, South Korea, on March 18, 2021. (Lee Jin-man/Pool via Reuters)
US News

US Committed to Defending South Korea and Japan: Blinken

In a call with South Korean Foreign Minister Park Jin on Aug. 19, U.S. Secretary of State Antony Blinken said Washington is committed to defending the Republic of Korea (ROK) and Japan.

“The Secretary expressed his appreciation for President Yoon [Suk-yeol]’s remarks during his Liberation Day address, particularly the ROK’s concerted efforts to improve its relationship with Japan and secure the complete denuclearization of the Korean Peninsula. The Secretary reaffirmed the U.S. ironclad commitment to the defense of the ROK and Japan,” Department of State spokesperson Ned Price said in an Aug. 19 statement.

The duo exchanged views on the importance of cooperating to uphold “international rules-based order” and the stability of the Indo-Pacific region, including the Taiwan Strait. Blinken highlighted the importance of Washington adopting policies that ensure the economic security of both South Korea and the United States.

Lee Jong-sup, South Korea’s defense minister, said his country’s policy on THAAD won’t be altered just because China is opposed to it. He also clarified that the THAAD system’s radar can’t be used against China.

“The current battery is not structured to play any role in U.S. defenses but placed in a location where it can only defend the Korean peninsula,” Lee told reporters, according to Reuters.

Tensions between China and Japan have also been heating up. Japan, together with the Group of Seven nations, criticized China for its threatening war games around Taiwan earlier this month.

“The Japan–China security environment has entered a new phase,” a senior Japanese Defense Ministry official said, according to Nikkei Asia.

“The country’s ties with Russia, an aggressor nation, have deepened in recent years, with joint navigations and flights being conducted in the areas surrounding Japan by both Chinese and Russian vessels and aircraft,” Kishi said in the report.