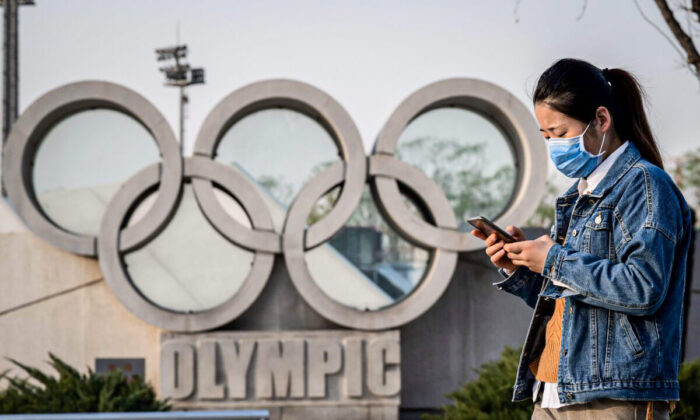 A woman wearing a mask walks before an Olympic rings sculpture at the national “Birds Nest” stadium in Beijing on March 23, 2020. (Nicolas Asfouri/AFP via Getty Images)
China Human Rights

US Commission Urges UN Report on Uyghurs Before Beijing Olympics

The Congressional-Executive Commission on China (CECC), a bipartisan group of U.S. lawmakers, is calling on the United Nations’ human rights office to release its assessment of the plight of the persecuted Uyghur ethnic group in China’s Xinjiang region before the start of the 2022 Winter Olympics.

“Doing so would provide a global public service as the international community’s attention turns to China while it hosts this international spectacle,” Sen. Jeff Merkley (D-Ore.) and Rep. Jim McGovern (D-Mass.), chair and co-chair of the CECC, wrote in a letter addressed to U.N. High Commissioner for Human Rights Michelle Bachelet. “It would also reaffirm the fact that no country is beyond scrutiny or above international law.”

Several Western governments, including the United States, Netherlands, and the UK, have said that the Chinese regime is committing genocide against Uyghurs and other ethnic minorities in Xinjiang. More than 1 million Uyghurs are currently being detained in internment camps, where they’re known to be subject to abuses such as forced sterilization, forced abortion, rape, torture, forced labor, and the removal of children from their families.

The Chinese Communist Party (CCP) has denied abuses in Xinjiang and has claimed that the camps are “vocational training centers.”

In September 2021, Bachelet, speaking before the Human Rights Council in Geneva, said she regretted that her office wasn’t able to report progress to “seek meaningful access” to Xinjiang.

Three months later, her office stated that it was finalizing its assessment of the situation in Xinjiang in the coming weeks, despite having made “no concrete progress” in talks with CCP officials on a proposed visit to the region.

The 2022 Winter Games, to be hosted by Beijing, are scheduled to start on Feb. 4. The United States, Australia, Canada, Lithuania, and the UK are among a group of countries that have announced diplomatic boycotts against the competition. The United States will still send its athletes to the Games, but not an official delegation.

U.N. Secretary-General António Guterres has drawn criticism for accepting an invitation in December 2021 from the International Olympic Committee to attend the Beijing Games. A coalition of 250 civil society groups, known as No Beijing 2022, is calling on Guterres to reconsider his decision, according to a Jan. 14 joint statement.

“Your participation would undermine the United Nations’ efforts to hold China accountable and go against the core principles enshrined in the Universal Declaration of Human Rights and relevant treaties,” the group wrote. “As the highest representative of the U.N., your attendance will be seen as credence to China’s blatant disregard for international human rights laws and serve to embolden the actions of the Chinese authorities.”