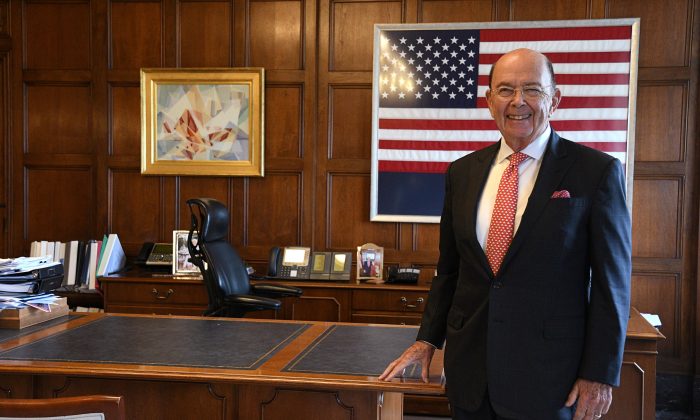 U.S. Secretary of Commerce Wilbur Ross poses in his office during an interview with Reuters at the U.S. Department of Commerce building in Washington, U.S., on Oct. 5, 2018. (Mary F. Calvert/Reuters)
US-China Relations

WASHINGTON—U.S. Commerce Secretary Wilbur Ross signaled on Oct. 5 that Washington may flex its muscle with additional trading partners in order to exert pressure on China to open its markets, saying that a “poison pill” provision in the recently completed pact with Canada and Mexico could be replicated.

Ross said in an interview that the provision was “another move to try to close loopholes” in trade deals that have served to “legitimize” China’s trade, intellectual property, and industrial subsidy practices.

The United States is now in the early stages of talks with Japan and the European Union to lower tariff and regulatory barriers and try to reduce large U.S. trade deficits in autos and other goods.

If the EU and Japan signed on to provisions similar to the one in the new U.S.-Mexico-Canada Agreement (USMCA), it would signal that they are fully aligned with Washington in trying to increase pressure on China, the world’s No. 2 economy, for major economic policy changes.

The provision in USMCA, which is expected to replace the North American Free Trade Agreement (NAFTA), effectively gives Washington a veto over Canada and Mexico’s other free trade partners to ensure that they are governed by market principles and lack the state dominance that is at the core of President Donald Trump’s tariff war against China.

Under the provision, if any of the three countries in the USMCA enters a trade deal with a “non-market country,” the other two are free to quit in six months and form their own bilateral trade deal with each other.

Ross, asked if the provision would be repeated in future trade deals, said: “We shall see. It certainly helps that we got it with Mexico and with Canada, independently of whether we get it with anyone else.”

He added that with a precedent now set, it will be easier for the provision to be added to other trade deals. “People can come to understand that this is one of your prerequisites to make a deal,” he said.

Hanging over the talks with the EU and with Japan is the threat of a 25 percent U.S. tariff on imported autos and auto parts as the Commerce Department pursues a study on whether such imports pose a national security threat. The USMCA deal largely exempts Canada and Mexico from such tariffs.

The United States cited national security concerns when it announced tariffs on imported steel and aluminum from a number of countries in early March.

Ross said Canada and Mexico are effectively “really not in a position to object to (the national security tariffs) anymore because they’ve signed an agreement that says if we put them in we’ll exempt the first 2.6 million” vehicle imports from each country.

Ross declined to discuss timing for releasing the “Section 232” auto probe’s findings, noting that Trump has said he would not impose car tariffs while the EU and Japan talks are underway.

But in a signal that the probe could take longer, Ross said the Commerce Department was now incorporating details on autos trade from the USMCA deal, including new provisions that will effectively require more automotive content to be made in the United States.

Ross also said Japan should take steps to “move manufacturing into the U.S.” to cut its $40 billion automotive trade surplus with the United States. He declined to say if the Trump administration would seek a voluntary autos export cap from Japan.

“The methodology that we’ll use will be determined by the negotiations. There are plenty of ways you can solve things,” Ross said. “We want more production of everything in the United States. That’s our theme song with everybody.”

Ross said he did not expect much movement on China trade talks until after the Nov. 6 U.S. congressional elections, adding that Chinese officials do not appear in a mood to talk at the moment.

He said the view among some Chinese officials that Trump will be weakened by Democratic Party gains in Congress is a miscalculation, because “the real farmers, the real ranchers are hanging in there” and are not likely to turn away from Trump and Republicans in Congress.

The November elections are being closely watched to see if the Democrats can wrest control of the Senate or the House of Representatives from Republicans. Some of the key races are in states and Congressional districts where farming dominates and that had voted for Trump in 2016.

Ross trumpeted the Commerce Department’s June settlement with ZTE, China’s No. 2 telecommunications equipment maker, saying it brought an unprecedented level of change and scrutiny to the company that could be used in other cases.

Commerce virtually put ZTE out of business in April when it banned U.S. companies from supplying ZTE with components for its smartphones and networking gear for failing to comply with a deal to settle violations of U.S. sanctions on Iran.

Under the settlement deal that allowed ZTE to resume shipments, the company replaced its board and senior management, allowing a Commerce Department monitor access to the company for 10 years, in addition to agreeing to a $1 billion penalty and a $400 million escrow payment.

“We’ve set the pattern that a huge, publicly owned company…changed its management, changed its board and permitted extreme intrusion by a foreign government regulatory agency,” Ross said. “I don’t think you’ll find anything comparable to that anywhere in the world.”

Ross also highlighted the current labor contract talks between U.S. steel companies and the United Steelworkers union, saying that wage increases are a likely outcome and that they would be a bellwether for the broader U.S. labor market.

United States Steel and ArcelorMittal USA, a unit of ArcelorMittal, have been negotiating new labor contracts for about 31,000 workers represented by the United Steelworkers union since July. A deal, however, remains elusive as workers are demanding a share in the profits from soaring steel prices.