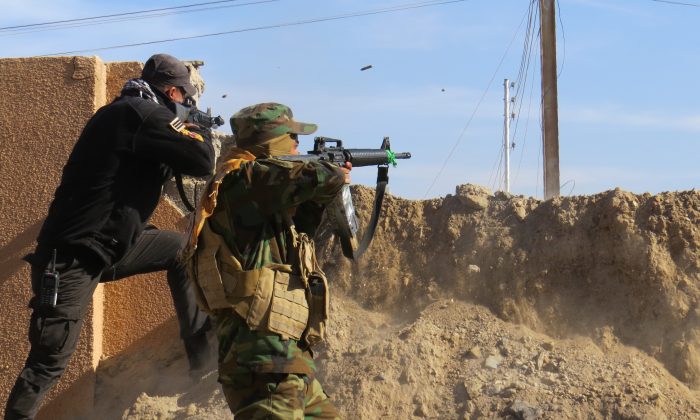 Members of the Iraqi government forces battle with Islamic State (ISIS) fighters east of Ramadi, after they took control of the agricultural area surrounding the eastern part of the capital of Iraq's Anbar Province on Jan. 12, 2016. (Moadh al-Dulaimi/AFP/Getty Images)
Middle East

RAMSTEIN AIR BASE, Germany—A series of deadly attacks by Islamic State operatives in and around Baghdad may be a sign that the militants are “reverting to their roots” as a terrorist organization, the top U.S. commander for the Middle East said Wednesday.

Army Gen. Joseph Votel, the head of U.S. Central Command, said this does not mean IS has given up its ambition to create a so-called caliphate. But he said it marks a new turn in tactics aimed at diverting attention from the group’s recent battlefield losses.

Speaking to reporters while traveling to the Middle East, Votel said the attacks that have rocked Baghdad over the past week, killing upward of 200 civilians, are an illustration of the dynamic nature of the war.

“We have to respect our enemies and respect their ability to adapt and adjust on the battlefield,” he said.

“In this regard, some of the attacks we’re seeing in Baghdad — I think we are seeing a manifestation of that. We are seeing them see opportunities and take advantage of those opportunities,” he added. “I think they believe it will cause the Iraqi government to divert forces, divert effort, divert intellectual horsepower to solving those problems” as opposed to priorities like recapturing the IS stronghold of Mosul in northern Iraq.

Now that IS has lost 40 percent or more of the terrain it once controlled in Iraq, “they may be reverting in some regards back to their terrorist roots,” he said.

Votel, who served in combat in both Iraq and Afghanistan, took over as head of Central Command two months ago after serving as commander of Special Operations Command. In his new post he oversees not only U.S. military operations in Iraq and Syria but across the greater Middle East, including in Afghanistan.

His visit this week to the Middle East comes amid concern about political unrest in Baghdad and the slow pace of Iraqi military operations to recapture Mosul.

Votel said he sees reason for “a little concern” about political paralysis that has gripped the Iraq government in recent weeks.