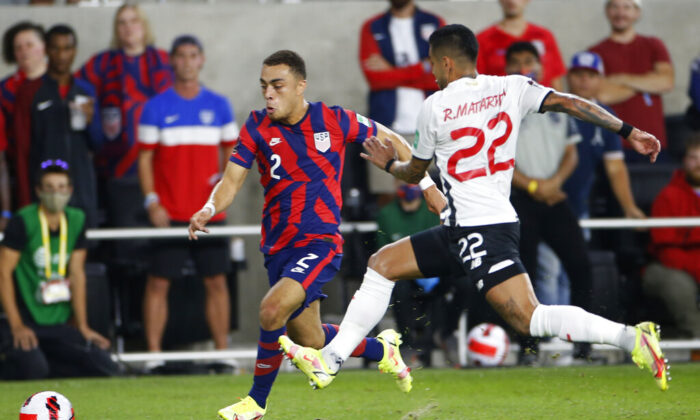 COLUMBUS, Ohio—In their World Cup CONCACAF qualifier against Costa Rica on Wednesday night, the United States Men’s national team gave up an early goal. But the young team was able to persevere and find a way to win, 2–1, a much-needed three points in the standings.

They had just lost to Panama last Sunday, and this was practically a must-win situation.

Coach Gregg Berhalter felt a need to make dramatic changes to spark the team. Nine changes were made from the previous starting line-up. This is the youngest U.S. World Cup qualifying team, as the starting 11 averaged just over 22 years and two months old.

It didn’t start well for new starting U.S. goalkeeper, Zack Steffen, as he and the defense allowed a goal in the first minute of play to Costa Rica’s Keysher Fuller. Steffen rushed out of his box to head away a looping through-ball from danger. Costa Rica was able to quickly retain possession on the left side and Ronald Matarrita crossed the ball to Fuller in the right-center of the box. Fuller’s side-foot volley bounced shot past Steffen on the left side of the goal. The linesman conferred with the referee of the possibility of offsides by Costa Rica’s central forward near the path of the shot, but the goal was allowed.

But the United States soon got a grip on the game dominating ball possession. In the 25th minute, they responded with a beautiful left-footed shot by Sergino Dest of FC Barcelona. He received a short pass from Yunus Musah at the top-right side of the box, took a couple of dribbles left towards the center just inside the box, and blasted a bender into the upper left corner.

Dest said of his goal, “I was just so happy, you know. We needed a goal and we need to win the game because the points are important … we all want to go to the World Cup, so I think it was a really important goal,” he said, according to ESPN.

At halftime, Costa Rica substituted their Paris Saint Germaine goalkeeper, Keylor Navas, due to an injury. The substitute keeper in the 66th minute, Leonel Moreira, was unable to stop a shot from U.S. forward, Timothy Weah. Dest’s through-pass opened Weah towards the right-center of the box. Weah‘s one-touch shot hit the right post and then rebounded off of Moreira’s back for an own goal.

Weah said, “But we knew what our game plan was, and it was to expose their backline and I feel like we did that. The outside backs played a huge role today. The wingers played great. Everyone played great so it was us coming together and just staying focused and adding that intensity,” according to ESPN.

There were a couple of lapses in the young American defense, which will need much strengthening as they forge forward. At the end of the first half, the U.S. defense lost possession deep in their territory. U.S. defender Chris Richards may have fouled Johan Venegas with the slide tackle that dispossessed the ball away from Venegas.

In the second half, American defender Miles Robinson gave the ball away to Costa Rica captain, Bryan Ruiz, on an apparent breakaway. But Robinson’s young stride caught the 36-year-old Ruiz to stop the threat.

The victory gives the U.S. team a foothold on second place in CONCACAF World Cup qualifications, as the top three teams advance for Qatar 2022. Mexico, with an unbeaten record of 4–0–2, sits on top of the standings. The United States is three points behind, with one loss.  This sets the stage for a showdown between the top two teams next month, Nov. 12, in Cincinnati.