US Coast Guard Intercepts Boat with 400 Haitian Migrants Off the Bahamas: Report 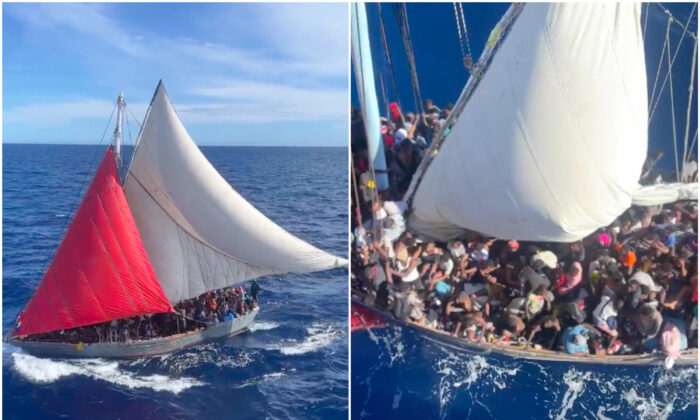 The U.S. Coast Guard has detained a 50-foot boat crammed with nearly 400 Haitian migrants near the Bahamas.

The migrant ship carrying 396 “unlawful entrants from the Republic of Haiti” was intercepted on Saturday near Cay Sal Bank, an island between Florida and Cuba, according to Bahamian immigration authorities.

In a video shared by the Coast Guard, a rescue group can be seen approaching the passengers, many of whom could barely keep themselves from falling off the overloaded sailing boat.

Nicole Groll, a spokesperson for the Coast Guard, told the Associated Press that the vessel was “grossly overloaded and very much unsafe.”

Bahamian officials said the migrants will undergo customary screening and stay at a detention facility on the Bahamian island of Inagua while waiting to be sent back to Haiti “as quickly as possible.”

While the Bahamian government didn’t disclose the destination where the vessel was sailing, recent years have seen sea-borne migrants from Haiti, Cuba, and many other countries, with the help of smugglers, trying to use the Bahamas as a springboard to Florida.

Earlier this month, Florida Gov. Ron DeSantis declared a state of emergency, directing the state’s National Guard and state agencies to support local governments to deal with the influx of illegal immigrants, which he said “is likely to constitute a major disaster.”

“The number of individuals attempting to come to the United States and unauthorized alien interdictions in and around Florida has risen to alarming levels not seen for decades,” the Republican governor said, noting that this could continue to overburden the local governments throughout his state.

“From august 2022 to the present, federal, state, and local officials have interdicted approximately 8,042 migrants in Florida’s territorial waters alone.”

These sea crossings, usually carried out by unseaworthy and overloaded boats, are not only illegal but also deadly. The Coast Guard has repeatedly warned would-be illegal immigrants that they should not risk their lives to embark on such voyages.

“Please do not encourage your family or friends to risk the dangerous journey across the Florida Straits, Windward Pass, Mona Pass or Caribbean Sea on unsafe, overloaded vessels,” the Coast Guard’s Florida Unit said in a warning ahead of last year’s Christmas. “Do not send them money for the purpose of funding their illegal ventures or to pay human smugglers whose empty promises may result in an empty chair at the family table this winter.”