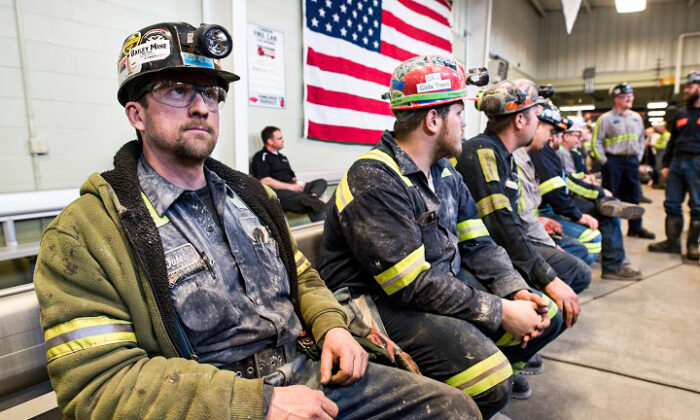 Coal miners wait at the Harvey Mine in Sycamore, Pa., on April 13, 2017. Multiple U.S. coal producers have reportedly sold out of coal through 2022. (Justin Merriman/Getty Images)
Economy

U.S. coal stocks fell by 4.8 percent over the course of the previous month, according to the EIA.

The record low is occurring as a national and global energy crunch has driven up the cost of coal, natural gas, and oil, with Chinese buyers willing to purchase coal at “any price,” Al Jazeera reported.

In recent years, the percentage of electric power generated by coal in the United States has rapidly declined, which some commentators have attributed to actions taken by the Obama administration, such as the 2015 Clean Power Plan. Others have claimed that competition from cheaper natural gas is the primary reason for the decline.

During its first few months in office, the Biden administration shut down the Keystone XL pipeline and halted oil and gas leasing on federal lands and waters.

“[President] Barack Obama vowed to bankrupt the coal industry, then launched a war on coal that decimated the coal industry,” Taylor told The Epoch Times. “After a welcome reprieve under the Trump administration, Joe Biden has picked up where Obama left off.

“The predictable result is that coal mines have shut down, supplies are low, and we are much more vulnerable to the type of polar vortex event that decimated Texas last year. You can’t wage war on coal and not expect coal supplies to plummet.”

“Record low US coal stockpiles are just another indication of the death of American energy at the hands of the Biden administration,” Marc Morano, who runs the website Climate Depot, told The Epoch Times. “Killing pipelines, stopping drilling, going after fracking, and record low coal supplies all mean ‘success’ for Biden’s climate policy.

“The real issue is going to be energy prices and shortages this winter in the U.S., Europe, and around the world. Restricting energy supplies is bonkers if you care about human health and welfare.

“When Americans are facing blackouts and brownouts this winter, all while paying much higher energy prices, they will be able to console themselves with the claim that the U.S. is now a leader in ‘fighting climate change.’ Sadly, the climate will not notice one bit, but Americans sure will.”