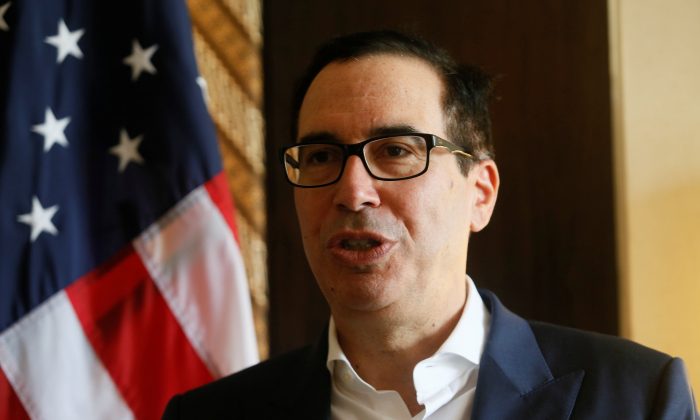 NUSA DUA, Indonesia—U.S. Treasury Secretary Steven Mnuchin said on Oct. 12 that he told China’s central bank chief that currency issues need to be part of any further U.S.-China trade talks and expressed his concerns about the yuan’s recent weakness.

Mnuchin also told Reuters in an interview that China needs to identify concrete “action items” to rebalance the two countries’ trade relationship before talks to resolve their disputes can resume.

The U.S. Treasury chief and People’s Bank of China Governor Yi Gang extensively discussed currency issues on the sidelines of the International Monetary Fund and World Bank annual meetings on the Indonesian resort island of Bali.

“I expressed my concern about the weakness in the (yuan) currency and that as part of any trade discussions, currency has to be part of the discussion,” Mnuchin said of the meeting.

The two senior officials talked about market fundamentals that have driven the yuan down against the dollar, Mnuchin said, adding: “I think we had a productive explanation from his standpoint on those issues.”

Mnuchin’s comments on China’s currency come ahead of next week’s scheduled release of a hotly anticipated Treasury report on currency manipulation, the first since a significant weakening of yuan began this spring as trade tensions between the world’s two largest economies escalated.

The yuan weakened on Oct. 12 to 6.912 to the dollar as China reported a record September trade surplus with the United States, fanning fears of an escalation of the two countries’ trade war.

The Chinese currency has depreciated by 5.6 percent against the dollar since the start of the year.

Mnuchin would not discuss the findings of the currency report and declined comment on media reports that Treasury staff had recommended that China not be labeled a currency manipulator.

But Mnuchin emphasized that the report is based on rigorous research and data, and that Treasury’s career staff and leadership were fully aligned on currency issues.

“The currency report is something we report to Congress. It is done pursuant to two separate pieces of legislation. This is not a political document,” he said.

These include a high bilateral trade surplus with the United States, a global current account surplus above three percent of gross domestic product and “persistent” one-way currency market intervention to weaken or prevent a rise in a country’s currency. In the past two years, China has failed on one criteria–its high trade surplus with the United States.

U.S. laws mandating the report require the Treasury to enter special negotiations with an offending country to correct their practices, a process that could eventually lead to trade sanctions. The Trump administration has already hit China with tariffs on $250 billion worth of Chinese goods imports, and has threatened duties on the remaining $267 billion.

Mnuchin declined to confirm a Wall Street Journal report that the White House had decided to proceed with a meeting in November between President Donald Trump and Chinese leader Xi Jinping at the G20 leaders summit in Buenos Aires.

But he said re-launching trade talks would require China to commit to taking action on structural reforms to its economy.

“It’s got to be more than a signal” from China, Mnuchin said. “It has to be that we can reach an agreement on action items that can rebalance the relationship. We’ve made it clear that if they have real action items that they want to discuss that we will listen.”

Separately, Mnuchin told CNBC in a televised interview on Oct. 12 that Trump would go through with plans to meet Xi “if it looks like we can make positive direction,” adding that there was no set deadline for trade talks with China.

If the U.S.-China relationship could be rebalanced, Mnuchin told Reuters their total annual trade relationship could grow to $1 trillion from $650 billion currently, with $500 billion of exports from each country. That would approach the $1.2 trillion U.S.-Canada-Mexico trade under the North American Free Trade Agreement.

As the IMF launches talks with Pakistan over a bailout package, Mnuchin said transparency was needed for Pakistan’s debts to China and other creditors.

“I think it’s pretty clear that if there is an IMF program, that we’d need to make sure those funds are used for appropriate purposes and they’re not being used to repay China or other creditors. I would expect China to understand that.”

Regarding steep U.S. stock market declines over the past two days, Mnuchin said these were “normal market corrections.”

“I don’t believe markets are efficient,” he said. “So I think that when people invest in the markets, they need to be prepared that there will be times when markets go too far in both directions.”