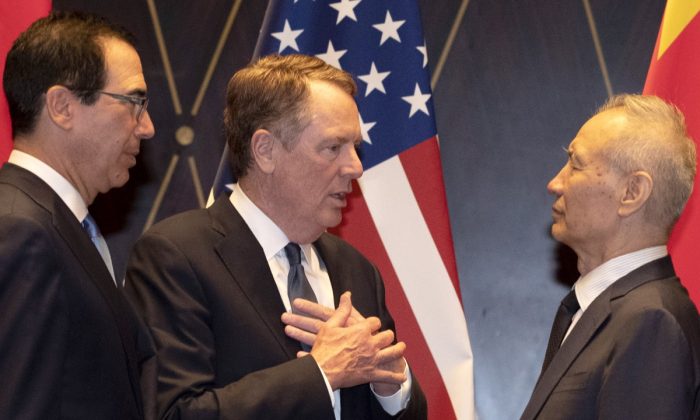 Trade talks between the United States and China ended without any significant progress after negotiators worked to reach a deal to end the long-running trade war.

U.S. Trade Representative Robert Lighthizer and Treasury Secretary Steven Mnuchin met with Chinese officials briefly for dinner in Shanghai on July 30 and left the next day after scheduling talks to take place in the United States in September.

Frank Xie, John M. Olin Palmetto Chair Professor in Business at the University of South Carolina Aiken, said the Chinese communist regime should not be trusted to fulfill their agreements.

“Look at what happened in Hong Kong right now,” Xie told The Epoch Times. “They had this deal, they had this agreement with the British. They said they were going to keep that system unchanged for 50 years, now see what they’re doing.

“They’re trying to impose the communist dictatorship. The rule of no law, the Chinese rule on the people of Hong Kong.”

Xie says back when China accessed the World Trade Organization in 2001, they agreed to many terms and conditions and kept none of those promises.

“You’re facing a regime that has no credibility,” said Xie. “Very brutal. We just passed 30 years of the June 4th Tiananmen Square massacre … and then just another 20 years of the persecution of Falun Gong, so you can see this is a regime that is so brutal.”

Unresolved problems brought out by the broken down draft agreement from May include trade practices and enforcement mechanisms to ensure China makes administrative and regulatory changes.

In a statement from the White House on July 31, the press secretary said, “the two sides discussed topics such as forced technology transfer, intellectual property rights, services, non-tariff barriers, and agriculture.”

“The Chinese side confirmed their commitment to increase purchases of United States agricultural exports,” said the press secretary in the statement.

China failed to follow through on its previous promise to buy agricultural products from the United States and has a history of not fulfilling its pledges for structural change.

“They just kept talking and talking, and not really acting,” said Xie.

The trade war has caused volatility in stock markets worldwide and hit China’s economy hard due to tariffs, with factory activity down in July for the third month straight, according to an official report from Chinese authorities.

“Time is not on their side,” said Xie. “That’s why they’re so furious at Trump imposing the 10 percent and 25 percent on the first $250 billion dollars of Chinese exports.”

President Donald Trump said that China is stalling, suggesting they are waiting for the outcome of the 2020 election to see if they can work out a deal with a Democratic president on the hopes one is elected.

Xie said the Chinese economy is in recession with huge unemployment close to 15 percent, forcing them to the negotiation table with the United States.

“The Chinese Communist [regime] is playing with fire and the $325 billion taxes tariff could be imposed very soon,” said Xie.

Trump warned China not to wait, saying if he is re-elected, negotiations would be even tougher and could result in no deal at all.

Xie said that without a legitimate democratic election process, the only thing keeping the Chinese communist regime afloat is money, wealth largely gained through state-owned enterprises it controls and trade surpluses with the United States.

“They don’t have time to keep delaying, to play those delay tactics because they’re hurting,” Xie said. “Trump said it exactly right, the Chinese economy is hurting, the American economy is booming. So they really don’t have much, if any bargaining chips in their hands to delay this any further.”