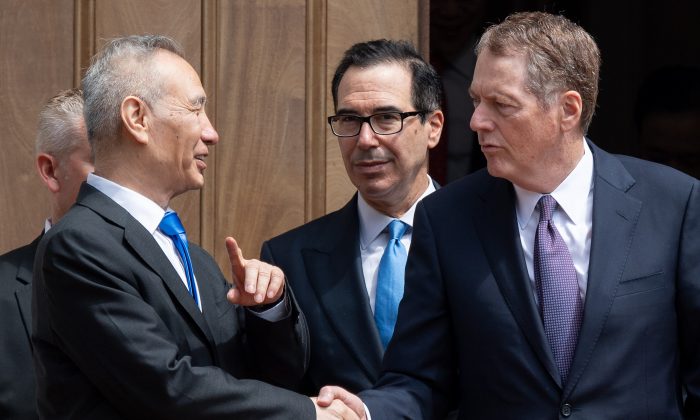 Two days of trade talks between the United States and China ended without a reached agreement on May 10. After the talks concluded, U.S. President Donald Trump said there was no rush to reach a trade deal.

In a Twitter post, Trump said the two sides held “candid and constructive conversations,” adding that discussions would continue in the future.

Treasury Secretary Steven Mnuchin said there were no further talks scheduled between the two countries as of yet, CNBC reported.

After midnight, a tariff hike from 10 to 25 percent on $200 billion worth of Chinese goods officially went into effect on May 10. Trump announced the unexpected move on May 5 in response to Beijing allegedly reneging on commitments made during months of negotiations.

The president, in a tweet on Friday afternoon, said whether the tariffs would remain depended on the outcome of future negotiations.

U.S. Trade Representative Robert Lighthizer, U.S. Treasury Secretary Steven Mnuchin, and Chinese Vice Premier Liu He held a second day of talks in Washington on May 10. The session ended after about 90 minutes.

Liu, the lead Chinese negotiator, told reporters at his hotel in Washington that the talks had gone “fairly well,” Bloomberg reported.

On the morning of May 10, Trump wrote a series of tweets defending the tariffs, adding that there was no rush to conclude a deal.

“Tariffs will make our Country MUCH STRONGER, not weaker. Just sit back and watch! In the meantime, China should not renegotiate deals with the U.S. at the last minute,” he said.

The president said the income from the tariffs would be used to provide food aid to countries in need.

“With the over 100 Billion Dollars in Tariffs that we take in, we will buy agricultural products from our Great Farmers, in larger amounts than China ever did, and ship it to poor & starving countries in the form of humanitarian assistance,” he tweeted.

Talks with China continue in a very congenial manner – there is absolutely no need to rush – as Tariffs are NOW being paid to the United States by China of 25% on 250 Billion Dollars worth of goods & products. These massive payments go directly to the Treasury of the U.S….

Trump added that the administration was planning on imposing new tariffs on another $325 billion worth of Chinese imports.

Following the U.S. tariff hike, China‘s Commerce Ministry said it would take countermeasures but did not elaborate.

China‘s central bank said it would be fully able to cope with any external uncertainty.

U.S. Agriculture Secretary Sonny Perdue said on May 10 that Trump had asked him to create a plan to support the farmers. The agricultural department has already rolled out roughly $12 billion to help offset farmers’ China-related losses.

Earlier this week, the U.S. administration accused the Chinese regime of going back on past commitments made in earlier rounds of trade talks.

The reversal affected every chapter of the nearly 150-page draft agreement that was being negotiated over months of bilateral talks, Reuters reported.

The Trump administration’s demand for the Chinese regime to implement structural reforms, which propelled it to launch the trade war with China last March, has been a sticking point during trade negotiations.