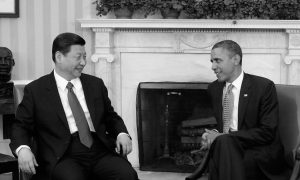 President Barack Obama and Xi Jinping, the supreme leader of the Chinese Communist Party, are set to meet at the estate of a billionaire publishing magnate in the Californian desert on June 7. The setting—an expansive, private manor and surrounds—is designed to give the two leaders plenty of unscripted time to get to know one another, something that would not have been possible in the formality of a black tie dinner and press conference at the White House.

China’s state-run media outlets have, however, in the run up to the meeting, floated a distinctly old-fashioned theory of global affairs, dating back to the Cold War. It seeks simultaneously to expand the Chinese Communist Party’s foothold in its relationship with the United States, keep U.S. influence out of Asia, and strengthen China’s position relative to its regional peers: it is the idea of a “new model of great power relations.”

A recent headline in the People’s Daily, the mouthpiece of the Chinese Communist Party (CCP), explains: “Scholar says that establishing a new model of great power relations requires abandoning the Cold War mentality and not contending for hegemony.”

The headline highlights one of the perils of Chinese communist political communication: black and white often switch seats.

According to Chen Pokong, an analyst based in New York who studies and writes about the Chinese regime for a number of Chinese-language media outlets, when the People’s Daily carries a headline of this sort, the meaning is actually meant to be read in reverse. “When the Communist Party says that the U.S. should abandon its Cold War mentality, what it means is precisely that the Party has a Cold War mentality. And when they tell the U.S. not to declare themselves a hegemon, it means that the Party wants to be the hegemon.”

This analysis is yielded by reading carefully between the Party lines, to figure out what they really mean, Chen says. The doctrine effectively proposes “dividing the world into spheres of influence, with the United States not interfering with their sphere of influence in the Asian region,” according to Chen.

So, while pursuing vigorous economic engagement with the United States (and vigorously sending computer hackers to steal its corporate and military secrets), the Party would like the security and geopolitical relationship to be a bit more like it was with the Soviet Union: You don’t touch my stuff, and I won’t touch yours.

Though it has been a focus of official propaganda for the last week or more, it is as yet unclear whether the doctrine will amount to no more than empty sloganeering, or become a concerted effort by the People’s Republic of China to establish its relationship with the United States on what it argues is a fairer and more equal footing, and to firmly expel U.S. influence in Asia.

In any case, the boasting is useful for a domestic audience, appearing to show the growing power and influence of China, led by the Communist Party, on the world stage.

‘They want to be equals’

“This meeting with Obama is extremely, extremely important for China,” says Shi Cangshan, an independent analyst of Party affairs based in Washington, D.C.

“They want to sit on the same table as the U.S., they want to be equals. So this new model is to make clear what they mean,” he said. A large part of it stems from Chinese frustration with the U.S.-led global order since World War II, which has been undergirded by American-led global institutions and financial influence, and underwritten by American military power.

“As a rising power, China wants to change those game rules,” Shi Cangshan said, while adding the important caveat that this usual dynamic, of a rising power challenging an established power, is all being filtered through, and carried out along distinct, ideologically communist lines. “The Chinese Communist Party’s final goal is of course to be the boss,” Shi said, using the Chinese term “Laoda,” whose connotations are somewhat broader. “They want to be like the U.S., and even more powerful than the U.S.”

The Party’s first steps are being taken in the Asian region, which is why it’s important for the PRC that the U.S. butt out. “When they get into a dispute with Japan, America comes over. The CCP wants to say, “You don’t need to maintain the peace. I’ll maintain the peace.’”

No analyst thinks the outcome of this, if successful, would bode well for anyone but China’s communists. The CCP would be far less a benevolent superpower than the United States, Shi says. “If there’s someone who beats his kids at home, you know he’s not a good guy, no matter how good he acts when outside.”

While the doctrine and approach depicted in official propaganda indicates the Party’s long-term strategic thinking and intent, the new leadership is facing severe economic and social pressures domestically, and an increasingly wary regional political environment, Shi says. The extent to which Xi will explicitly push these ideas in his discussions with Obama, while strolling the estate in sunny Rancho Mirage, flanked by mountains, is unclear.