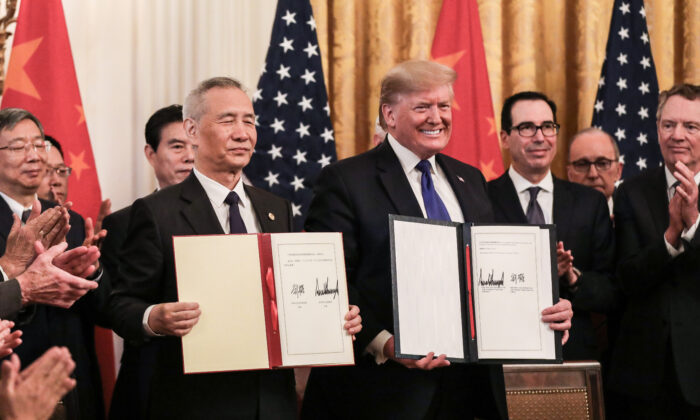 Chinese Vice Premier Liu He (L) and President Donald Trump during the signing of phase one of a trade deal, surrounded by officials, in the East Room of the White House in Washington on Jan. 15, 2020. (Charlotte Cuthbertson/The Epoch Times)
US News

WASHINGTON—The United States and China signed a much anticipated “phase one” trade deal on Jan. 15, making an important breakthrough in the nearly 2-year-old trade war.

President Donald Trump and Chinese Vice Premier Liu He signed the accord at a White House ceremony.

“Together we are righting the wrongs of the past and delivering a future of economic justice and security for American workers farmers and families,” Trump said. “This is a very important and remarkable occasion.”

“Our negotiations were tough, honest, open, and respectful, leading us to this really incredible breakthrough. Most people thought this thing will never happen. It should have happened 25 years ago, by the way.”

“There’s an ancient Chinese proverb that says: Men see only the present, but Heaven sees the future,” Pence said. “So let today be the beginning of a brighter future, more prosperous to the American people, the Chinese people, and the world.”

Trump offered rounds of praise to individual cabinet members and officials involved in negotiating the treaty, and to businessmen attending the ceremony at the White House, including executives of Mastercard, Honeywell, Boeing, the U.S. Chamber of Commerce, AIG, J.P. Morgan Chase, and Ford.

Trump also promised an end to punitive tariffs on China after the completion of the “phase two” deal, negotiations on which he said would begin as phase one kicks in.

Toward the end of the remarks, Trump said: “This is the biggest deal there is anywhere in the world, by far. And that’s good. We’re doing another big one next week [the USMCA comes up for a vote in the Senate]. But this is the biggest deal anybody has ever seen. And it can lead to being a deal that’s unprecedented, because China has 1.5 billion people, and ultimately, in phase two, we’re going to be opening up China to all of your [American] companies. So I hope you folks can handle it.”

Liu He began his remarks by thanking the president of the United States, and then said he would like to read a letter from Chinese leader Xi Jinping.

“Mr. President, as China and the United States sign a phase one trade agreement, I’ve asked Vice Premier Liu He to bring my warm greetings,” the letter states.

Xi reminded Trump of a Dec. 20 phone call in which he said the conclusion of the deal was good for China, the United States, and the whole world, and he hoped the two nations could now work on mutual respect.

“In that spirit, I hope the U.S. side will treat fairly Chinese companies and their regular trade and investment activities and give support to the collaboration between enterprises, research institutes, and schools and colleges of the two countries,” Xi wrote.

Liu spoke optimistically about the significance of the deal as well.

“Over the past two years, the two sides encountered some difficulties in the economic and trade field,” Liu said. “However, our two economic teams did not give up. With the relentless efforts from both sides on the basis of equality and mutual respect, we have reached this phase one trade agreement.”

Beijing has committed to buying $200 billion worth of additional U.S. goods and services over the next two years, including $40 billion to $50 billion of agricultural goods each year.

“The farmers are going to be so happy,” Trump said.

In addition to farm products, Beijing has committed to buying additional manufactured goods of more than $75 billion, energy products of over $50 billion, and services close to $38 billion over the next two years, a senior administration official told reporters.

These purchases are expected to continue on the same trajectory for several years after 2021 and contribute to the rebalancing of the U.S.–China trade relations, according to a factsheet on the deal released by the administration.

In addition, the 25 percent tariffs on nearly $250 billion of Chinese goods were kept in place, instead of increasing them to 30 percent, as was scheduled.

Beijing also canceled imposing tariffs on U.S. goods that had been scheduled for Dec. 15 as retaliation.

Trump said that he would use the remaining U.S. tariffs as a bargaining chip for the second phase of the deal.

“I’m leaving them on, because otherwise, we have no cards to negotiate with,” Trump said. “They will all come off as soon as we finish phase two.”

China has also promised to open up its financial services markets to U.S. banks and credit companies.

Included in the deal is a dispute resolution system that prescribes time frames for actions at various stages: starting from the working level, escalating all the way up to the USTR and Vice Premier level of both countries.

It’s designed to be a 75-day period from the start of the appeal until resolution of the dispute, according to a senior administration official. If there’s no resolution within that time frame, there will be an opportunity for expedited consultations on the remedy for an additional 15 days. If parties fail to reach a resolution, they have the choice to quit the agreement, the official said.

“If we decide to take an action against China for violation of the agreement, they will have to make an assessment whether they want to be in the agreement or not,” he said.

It was designed this way to avoid China retaliating or challenging the United States at the World Trade Organization, he said.

Sen. Rick Scott (R-Fla.), an outspoken critic of the Beijing regime, casts doubt on whether China can fulfill its pledges.

“While it’s positive the United States is working towards a deal that would increase sales of U.S. agriculture products, Communist China never lives up to the bargain,” he told The Epoch Times in an email. “Communist China is stealing our technology and refuses to open their markets to foreign goods as required by their agreement to be part of the WTO, and needs to be held accountable.”

Despite this partial agreement, the uncertainty is likely to persist in 2020 as U.S.–China bilateral relations go beyond trade.

“This is also about human rights,” Scott said.

The Florida senator has been critical of Beijing for militarizing the South China Sea, for breaking the Hong Kong agreement, and for attacking religious freedom.

The most important issues in U.S.–China relations are put off for a future negotiation. The phase one deal does not address China’s state subsidies, for example, one of the top concerns of the administration and the impetus for starting a trade war.

Beijing has made no indication of how it would cut state subsidies and, politically, there seems to be no appetite to do that, according to experts. In the past decade, by funneling hundreds of billions of dollars into government subsidies, China has managed to create its own national champions in key industries.

In addition, China’s stance on intellectual property will continue to be a thorny issue, as Beijing wouldn’t make a significant concession to meet U.S. demands, experts say.

China has passed legislation to improve market access and strengthen IP protection in recent years. However, skepticism remains over the enforcement of these rules.

The phase one deal is “a small down payment on what needs to be done,” according to Peter Morici, an economist and business professor at the University of Maryland.

“As the agreement stands right now in terms of actual substantive changes in Chinese policy, there’s not a lot there,” he said.

“We have to see whether the Chinese will keep their word, whether they will indeed buy $200 billion more in U.S. products. If they do that, it might be easier to achieve a phase two deal because then liberalization in China might come easier.”

Morici, however, does not anticipate any progress on phase two talks until after the U.S. presidential election.

“If Trump is not reelected, this agreement becomes very questionable,” he said.

The U.S. Treasury Department on Jan. 13 dropped its designation of China as a currency manipulator in its latest semi-annual currency report, reversing its August decision.

The United States accused China of resorting to currency manipulation to create an unfair competitive trade advantage. The Treasury’s designation in August was the first since 1994.

In the latest report, the Treasury stated that China had made “enforceable commitments to refrain from competitive devaluation” and provided transparency on foreign exchange activities as part of the phase one trade deal.

After depreciating as far as 7.18 per dollar in September, the Chinese renminbi appreciated and is currently trading at about 6.90 per dollar.

6 Sectors to Benefit Most

The trade deal is welcome news for U.S. farmers. China’s retaliatory tariffs affected a host of farm products, including soybeans, corn, wheat, cotton, rice, and sorghum, as well as livestock goods. Soybean has been among those hit hardest, as it accounted for nearly 10 percent of total U.S. exports to China before the trade war.

In a research note, Cesar Rojas, an economist at Citigroup, wrote that the United States might need to increase the output of six products to meet the terms of the deal. These products include soybeans, auto chassis, auto bodies, aircraft, liquid natural gas, and LED lamps.

“Over the longer run, this is constructive for U.S. domestic investment and industrial production, but potentially costly in the short-run,” Rojas said. “This is because the U.S. has the greatest potential to immediately ship soybeans and grain to China, but not motor vehicles and aircraft.”

‘Trade War Is Not Over Yet’

The Chinese regime issued on Jan. 13 a cautionary note on a social media account affiliated with the state-run Economic Daily newspaper, saying the “trade war is not over yet.”

The regime called the signing of the phase one trade deal “just the first round of a game.”

“We must bear in mind that the trade war is not over yet—the United States hasn’t revoked all its tariffs on China and China is still implementing its retaliatory measures. There are still many uncertainties down the road,” the note said.

The world’s two biggest economies have for months been embroiled in a tit-for-tat trade war. Trump launched a tariff campaign in 2018 as part of a strategy to end Beijing’s decades-long unfair trade practices.

U.S. Trade Representative Robert Lighthizer, one of the lead negotiators in talks with China, warned earlier that it would still be wise to be skeptical of whether China would deliver on its promises. The United States won’t impose new tariffs as long as Beijing continues to act in good faith, he told reporters.