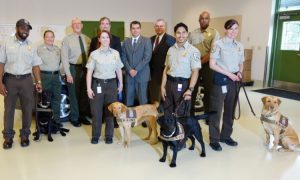 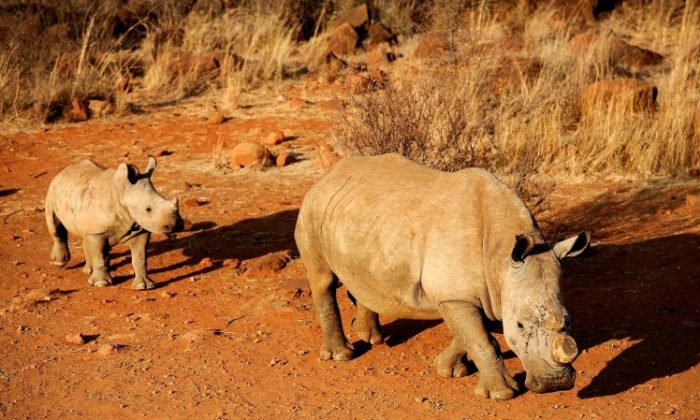 A black dehorned rhinoceros is followed by a calf at a game reserve in South Africa on Aug. 3. Its horns have been removed, probably by wildlife advocates to protect it from being killed by poachers seeking the valuable horns. (Stephane De Sakutin/AFP/Getty Images)
China

Two Chinese nationals were arrested in connection with a smuggling ring that sent rhino horns from the United States to China, said New Jersey officials this week.

A federal grand jury in New Jersey indicted Chinese national Li Zhifei for smuggling rhino horns to China and Hong Kong. Wei Shusen, a business executive, was charged in Miami and Wang Qing was charged in New York in connection with the smuggling ring, whose principals hid the contraband horns in porcelain vases before they were mailed to their destination.

Li allegedly conspired to smuggle more than 20 raw rhino horns from the U.S. to Hong Kong in 2011 and 2012, the Department of Justice said in a press release on Wednesday. Wei was charged with allegedly trying to bribe an undercover federal agent, while Wang was indicted for “smuggling libation cups carved from rhinoceros horns from New York to Li in Hong Kong,” the authorities said.

“In China, there is a tradition dating back centuries of intricately carved rhinoceros horn cups . Drinking from such a cup was believed to bring good health and such carvings are highly prized by collectors,” the release added.

Over a year, Li wired hundreds of thousands of dollars to another conspirator in the United States to fund rhino horn purchases. The Justice Department said he and the co-conspirator bought many of the horns in New Jersey before he was arrested January while he was in the state.

When Li arrived in Miami in January, he purchased two endangered black rhino horns from an undercover federal agent for $59,000.

The Justice Department said that all species of rhinos are protected under U.S. and international law, and that all black rhino species are endangered.

In recent years, the price for wildlife parts, including rhino horns and elephant tusks, has soared due to demand fueled by East Asian countries. The high demand has caused a spike in rhino and elephant deaths across Africa, according to animal conservation groups.

In 2012, a record 668 rhinos were killed in South Africa by poachers, said animal conservation group TRAFFIC in a report last month. The figure represents a nearly 50 percent increase over the previous year, when 448 rhinos were killed.

Rhino horn is often believed to have medicinal value in Asian medicine, which is one of the reasons for the high demand. Researchers have shown, however, that horns are made from keratin, the same type of protein that makes up fingernails and hair, or the hooves of animals—indicating that the notion that it has miracle curative properties is erroneous.

Some wealthy consumers also believe the horns can cure cancer, while some have said that they detoxify the body after a night of heavy drinking or gormandizing. Ornamental carvings are also highly prized.