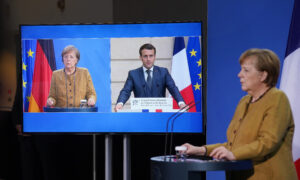 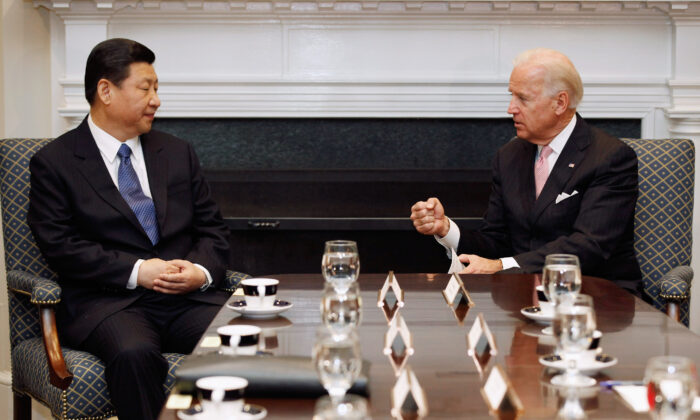 U.S. Vice President Joe Biden (R) and Chinese Vice Chair Xi Jinping talk during an expanded bilateral meeting with other U.S. and Chinese officials in the Roosevelt Room at the White House in Washington on Feb. 14, 2012. (Chip Somodevilla/Getty Images)
Thinking About China

US-China Relations Are Progressing Slowly, the CCP Is Anxious

After U.S. President Joe Biden finally conducted his first talk with Chinese leader Xi Jinping on Feb. 10, state-run media Xinhua proclaimed for three days that the call had sent “positive signals.” But the signals were obviously not strong enough, because on Feb. 14, Beijing’s mouthpiece People’s Daily issued another commentary. The article was penned under the authorship of “Bells,” titled “Promote a Healthy and Stable Development of Sino-U.S. Relations.” It urged both sides to “act.”

“Bells” is a collective pen name for People’s Daily commentators. They often publish editorials on the most important topics after receiving instructions from the highest level of the Chinese Communist Party (CCP). The CCP clearly knows that Xinhua’s statement of so-called “positive signals” was deceptive and meant to gloss over the declining U.S.-China relations. The phone call between the two leaders has revealed serious differences, and the situation is actually more like another obstacle. That’s why “Bells” was instructed to speak. Obviously, the CCP is anxious.

The People’s Daily article calls for “action” on both sides. This is the standard Communist Party term used to mobilize internally, and now it’s also being used in an emergency in the U.S.-China relationship. The CCP has already “acted,” but the new Biden administration doesn’t seem to mobilize.

Dialogues between U.S. Secretary of State Antony Blinken and Chinese diplomat Yang Jiechi, and between Biden and Xi are actually taking place for the purpose of talking, and there is no consensus as to the next step. Biden is still in strategic patience mode and has no plans to “act” for the time being. But the CCP’s top leaders are impatient. What’s more, the CCP banned the BBC and provoked Britain and Europe again, and the CCP’s effort to unite with the EU against the United States seems to be going nowhere.

The article by “Bells” reveals the truth about the U.S.-China conversation: there’s no “positive signal,” and the new U.S. administration doesn’t seem to be active about engaging China.

The article further states that, “one of the most important events in international relations in the past half century has been the restoration and development of Sino-U.S. relations.”

This finally brought out the innermost sentiments of the top CCP leadership. The U.S.-China relationship is indeed very important to the regime. It’s directly related to the survival of the regime, and to the status and prestige of the CCP’s top leaders. Improving U.S.-China relations quickly is the key to the CCP’s top policy makers trying to get out of internal and external difficulties. It can’t happen fast enough.

The article quotes Xi Jinping as saying, China and the United States will both “benefit from cooperation, and lose from confrontation,” meaning Xi is still trying to persuade the new U.S. administration to make concessions as soon as possible.

It also complained about former President Trump’s China policies: “Over the past few years, the China-U.S. relationship has encountered the most serious difficulties since the establishment of bilateral diplomatic ties.” The article went on to say that, hopefully, the new government will “find a practical way to push bilateral relations out of the predicament and get back on track as soon as possible.”

In its call for “action,” however, the article tells the Biden administration to “act cautiously” and in accordance with the CCP’s requirements and demands: “It needs to be pointed out that China is committed to developing cooperative relations with the United States, but such cooperation must be based on principle. Taiwan, Hong Kong-related issues, and Xinjiang-related issues are China’s internal affairs.”

On these issues, the two sides are facing serious confrontations, and the CCP once again makes a strong statement and demands of the Biden administration to give in. But if the United States doesn’t make concessions, how will the CCP handle the differences?

The CCP’s media doesn’t dare to mention more differences but continues to hope for the “re-establishment of various dialogue mechanisms.”

The CCP hopes to accelerate dialog. Even if it doesn’t bring any real results, it serves as publicity stunts. It would also greatly ease the pressure on the regime’s top leaders. But the actual situation would be just the opposite.

The article repeatedly calls to “avoid miscommunication and miscalculation,” and of course it’s implying that the new U.S. administration has “misunderstood and misjudged.” It calls on the Biden administration to make “correct political decisions” and to “consider cooperation and not deliberate confrontation.”

Once again, the CCP anxiously shouted and demanded for Biden to make concessions as soon as possible, and continue to raise the bargaining chip, asking the United States to accept an equal footing, saying that “as the world’s top two economies and permanent members of the U.N. Security Council, there is also a broad space for cooperation on various global issues between China and the United States.”

Biden’s backing off from Trump’s decoupling policy has actually softened the relationship and counts as a concession. Not surprisingly, this has led to the CCP pressing further, step by step. It’s the high-level CCP leaders who are in the midst of a greater misjudgment. Of course, Biden cannot be exempted from responsibility either. Biden’s biggest substantive concession was to not hold the CCP accountable for concealing the pandemic. The CCP didn’t appreciate it. Not only did they continue to prevent investigations into the origin of the CCP virus, they also kept blaming the United States for the outbreak in an attempt to push the United States into a corner.

On Feb. 14, the Chinese Embassy in the United States issued a statement saying: “The WHO is an authoritative multilateral international organization in the field of health, not a funfair where one can come and go at will. … What the U.S. has done in recent years has … gravely damaged international cooperation on COVID-19. … It is hoped that the U.S. will hold itself to the highest standards.”

Biden neglected to hold the CCP accountable for the pandemic. But not only did the CCP make no concessions, it added further assaults. Biden may believe that to remain temporarily low-key and patient will gradually resolve the problem. Even though Biden “underscored his fundamental concerns about Beijing’s coercive and unfair economic practices, crackdown in Hong Kong, human rights abuses in Xinjiang, and increasingly assertive actions in the region, including toward Taiwan,” according to a White House briefing on Feb. 2, his understanding of the CCP is far from thorough.

Biden also “affirmed his priorities of protecting the American people’s security, prosperity, health, and way of life, and preserving a free and open Indo-Pacific.” However, the CCP is exactly provoking Biden’s “priorities” and “fundamental concerns.” The question is, how far is Biden willing to back off using strategic patience?