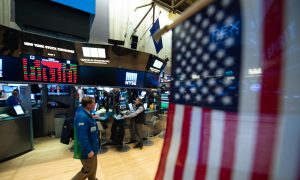 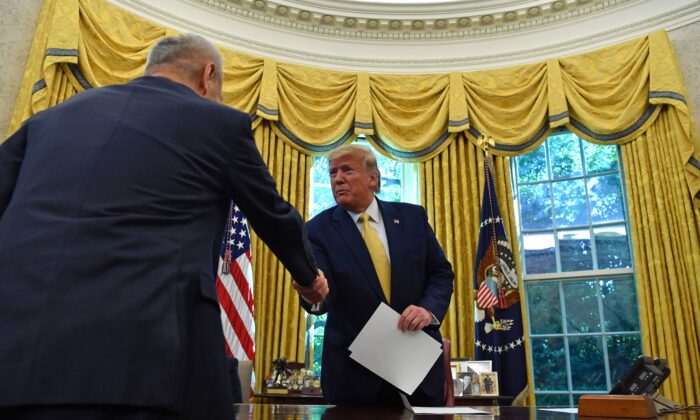 Chinese Vice Premier Liu He (L) hands over a letter of Chinese leader Xi Jinping to President Donald Trump at the Oval Office of the White House in Washington, on Oct. 11, 2019 (NICHOLAS KAMM/AFP via Getty Images)
US News

WASHINGTON—President Donald Trump announced on Friday that the United States reached a partial trade agreement “in principle” with China, on intellectual property, financial services, and agriculture.

As part of the agreement, Beijing agreed to purchase “up to $40 billion to $50 billion” in agricultural products from the United States. In return, Washington suspended the tariff hikes on Chinese goods scheduled for next week.

Trump met with Chinese Vice Premier Liu He on Friday at the White House following two days of talks between top-level U.S. and Chinese trade officials in Washington.

“We’ve been through a very tough negotiation. There’s never been a negotiation like this,” Trump said at the meeting.

Trump called the agreement “a very substantial phase one deal,” adding that there will be two or three phases in China trade talks. The President also said that both sides made progress on currency and foreign exchange issues as well as technology transfer discussions.

Treasury Secretary Steven Mnuchin at the meeting said there was “almost a complete agreement” on the issues of currencies and opening of Chinese financial services markets to U.S. firms.

Trump noted that it was “a tremendous deal” for American farmers.

“That would be two and a half, three times what China had purchased at its highest point thus far,” he said. “The farmers are going to have to work a lot of overtime to produce that much. That’s the largest order in the history of agriculture by far.”

With respect to tariff increases set to take effect in December, U.S. Trade Representative Robert Lighthizer said that Trump has not made a final decision.

He also said that both sides were very close to finalizing enforcement provisions and “a workable dispute settlement mechanism.”

The phase one agreement should be completed and signed “over the next four weeks,” Trump said, and the phase two negotiations would start “almost immediately after” that.

“We’re going to be in Chile in five weeks,” he mentioned, implying that there could be “a formal signing” with Chinese leader Xi Jinping. Both leaders will meet at an Asian-Pacific leaders summit in mid-November.

During the meeting, Vice Premier He handed over a letter from Xi to Trump.

“We have made substantial progress in many fields. We are happy about it,” He said. “We’ll continue to make efforts.”

Optimism was on the rise Thursday after media reports suggested there could be a partial agreement between the United States and China.

“We had a very, very good negotiation with China,” Trump said on Thursday after both sides held their first day of trade talks in Washington.

He also voiced optimism in a series of tweets on Friday morning.

“Good things are happening at China Trade Talk Meeting. Warmer feelings than in recent past, more like the Old Days,” Trump wrote. “I will be meeting with the Vice Premier today. All would like to see something significant happen!”

In another tweet, he said that “one of the great things about the China Deal is the fact that, for various reasons, we do not have to go through the very long and politically complex Congressional Approval Process. When the deal is fully negotiated, I sign it myself on behalf of our Country. Fast and Clean!”

Markets welcomed the partial deal, which lays the groundwork for a broader trade pact between the United States and China.

With today’s deal, the administration is “trying to essentially continue to portray confidence to the market,” said Robert Spalding, China expert and author of the book “Stealth War: How China Took Over While America’s Elite Slept.”

“The idea is to make investors more confident so they’re willing to invest,” he said.

However, he doubts that this will lead to a more comprehensive deal in the future, which will require Beijing to deliver broad structural reforms demanded by Washington.

“The Chinese Communist Party is not interested in a comprehensive deal. Period,” he said.

In September, Trump delayed a tariff increase on $250 billion of Chinese goods to Oct. 15 in a gesture of goodwill taking into account China’s Oct. 1 holiday. The Chinese regime, in response, exempted U.S. pork and soybeans from additional tariffs, and has recently made big purchases of U.S. soybeans.

With respect to Huawei, Lighthizer said “it’s not part of this agreement. That’s a separate process.”