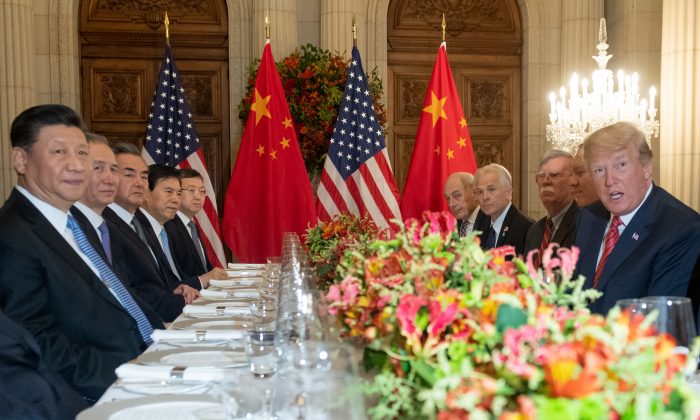 U.S. President Donald Trump (R) and China's President Xi Jinping (L) along with members of their delegations, hold a dinner meeting at the end of the G20 Leaders' Summit in Buenos Aires, on Dec. 1, 2018. (SAUL LOEB/AFP/Getty Images)
Trump Presidency

US, China Agree to Temporary Truce on Trade

BUENOS AIRES, Argentina—President Donald Trump and Chinese leader Xi Jinping declared a 90-day ceasefire on tariff increases between the United States and China on Dec. 1, at the end of their bilateral meeting on the sidelines of the G-20 summit in Argentina.

As part of the deal, Xi agreed to deliver structural reforms within the next three months.

“It’s an incredible deal,” Trump told reporters aboard Air Force One after the summit. “If it happens, it goes down as one of the largest deals ever made.”

Both sides will “immediately begin negotiations on structural changes” that Washington has been demanding for more than a decade. The structural reforms include ending China’s unfair trade policies and practices with respect to “forced technology transfer, intellectual property protection, non-tariff barriers, cyber intrusions and cyber theft, services, and agriculture,” according to the White House.

Trump has agreed to postpone the planned stepup in the tariffs on $200 billion worth of Chinese goods to 25 percent on Jan. 1. The tariffs will remain at 10 percent.

Xi has also agreed to purchase “a very substantial amount” of American goods, including agricultural, energy, industrial, and other products, in an effort to reduce the U.S. trade deficit with China. The White House said the size of the purchase hasn’t been agreed to yet, but China will start buying agricultural products from U.S. farmers immediately.

“Both parties agree that they will endeavor to have this transaction completed within the next 90 days,” the White House said. If they fail to reach an agreement by the end of this period, the tariffs will be increased to 25 percent from 10 percent.

Earlier this year, the Trump administration imposed new tariffs on nearly $250 billion worth of Chinese goods, to force Beijing to end its unfair practices.

“China will be opening up. China will be getting rid of tariffs,” Trump said. “China, right now, has major trade barriers—they’re major tariffs—and also major non-tariff barriers, which are brutal.”

During the meeting, Xi also said that he was open to approving a previously rejected takeover deal by Qualcomm Inc. The U.S. technology company was one of the victims of the trade dispute between Washington and Beijing. Chinese regulators in July blocked Qualcomm’s $44 billion takeover bid for its Netherlands-based rival, NXP Semiconductors NV.

According to Trump, the meeting was “an amazing and productive meeting,” bringing boundless opportunities for both countries.

Before the meeting, Trump praised his close friendship with Xi.

“The relationship is very special,” he said.

The Chinese leader echoed Trump and said the meeting was “a manifestation of a personal friendship.”

During the meeting, Trump and Xi were seated across from each other in the middle of the table, surrounded by their respective delegations.

Trump has long complained about China’s unfair trade practices and blamed previous U.S. leaders for failing to address the matter. For decades, Beijing hasn’t taken any concrete actions to fulfill its promises. And that’s why the Trump administration has chosen to take a tougher stance on China’s decades-long protectionist and trade-distorting policies.

Tensions between Washington and Beijing increased in recent weeks ahead of the meeting between Trump and Xi. The Trump administration had signaled that the United States wouldn’t back down unless China fundamentally changed its attitude.

According to experts, agreeing to Washington’s demands would undermine the Communist regime’s plans to achieve dominance in high-technology industries, as outlined in the economic blueprint “Made in China 2025.” However, the state of the Chinese economy has been putting pressure on Xi, as economic growth has slowed this year, battering its stock market. Troubles have deepened further with trade tensions, forcing the Chinese regime to come to the table to end the dispute.

Market reaction to the U.S.–China deal is expected to be positive. Despite short-term optimism, however, the China–U.S. trade dispute is very complex and involves issues that are beyond trade, according to investment adviser Peter Creedon.

“The issues involved for the United States have been basically ignored or glossed over by the last three presidents,” he said. “But now, China is on the verge of becoming a world superpower and challenging the U.S. position and economy.”