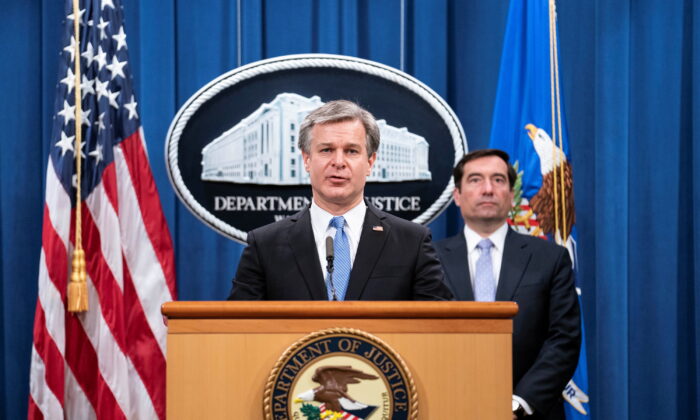 FBI Director Christopher Wray speaks during a press conference at the Department of Justice in Washington, on Oct. 28, 2020. (Sarah Silbiger/Pool via Reuters)
China-US News

The U.S. Department of Justice announced unprecedented charges against eight men over their alleged role in carrying out a campaign orchestrated by the Chinese regime to coerce a U.S. resident to return to mainland China.

The criminal complaint, unsealed on Oct. 28, alleges that the individuals had for three years targeted a former Chinese government employee and his wife and daughter who have been living in New Jersey since 2010.

Federal prosecutors alleged that the men were acting under the direction of Chinese officials to surveil, harass, and stalk the family.

The New Jersey man was targeted under a Chinese extralegal campaign known as “Operation Fox Hunt“—which was initiated by Beijing in 2014 to repatriate fugitives targeted by the Chinese Communist Party, including dissidents and officials who’ve fallen out of favor with the Party. To protect the victim’s identity, the department didn’t provide details on why he was targeted by the regime.

Five defendants were arrested on Oct. 28 in New Jersey, New York, and California. They were Zhu Yong, a Chinese citizen and U.S. permanent resident; Jin Hongru, a naturalized U.S. citizen; Michael McMahon, a U.S. citizen who was hired as a private investigator in the scheme; and Rong Jing and Zheng Congying, both Chinese citizens with U.S. permanent residencies. Three remain at large in China: Zhu Feng, Hu Ji, and Li Minjun.

“With today’s charges, we have turned the PRC’s [People’s Republic of China] Operation Fox Hunt on its head—the hunters became the hunted, the pursuers the pursued,”  Assistant Attorney General for National Security John C. Demers said at a press conference.

Demers described the defendants’ alleged conduct as “shocking but standard operating procedure for Operation Fox Hunt.” For instance, the complaint alleges that several defendants, with the help of unnamed Chinese officials, carried out a scheme to bring the New Jersey man’s elderly father to the United States from China for a surprise visit—in an effort to coerce the man into returning to China.

Acting U.S. Attorney Seth D. DuCharme said some of the tactics were “shockingly overt,” such as surveillance using night vision goggles.

Prosecutors alleged that in September 2018, Zheng and another unidentified co-conspirator affixed a note on the victim’s door that read: “If you are willing to go back to mainland [China] and spend 10 years in prison, your wife and children will be all right.  That’s the end of this matter!”

Other co-conspirators left packages at the victim’s home in early 2019, the Justice Department stated, that contained letters and a video with messages that threatened harm to the victim’s family members in China if he didn’t return to China.

“These are not the actions we would expect from a responsible nation state,” FBI Director Christopher Wray said at the press conference. “Instead, it’s more like something we’d expect from an organized criminal syndicate.”