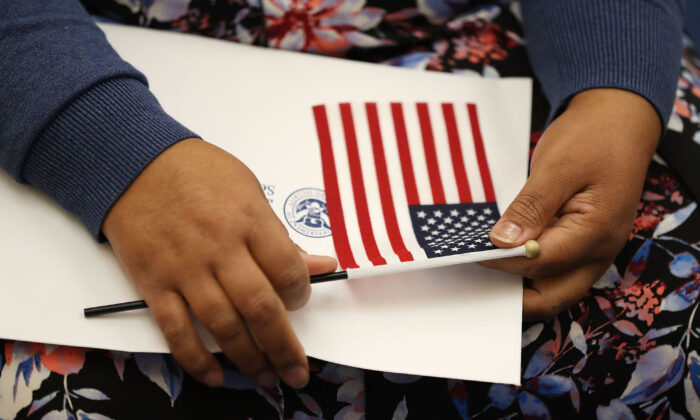 The U.S. Chamber of Commerce has called for amnesty for some illegal aliens and for twice as many legal immigrants to be let into the United States as a way to ease the country’s labor crunch and help curb surging inflation.

Chamber of Commerce Chief Executive Suzanne Clark said in a Jan. 11 keynote address on the state of U.S. business that competition for workers has become an urgent problem for employers.

“I talk to CEOs and leaders of businesses of every size, industry, and region every day—and to a person they tell me this: This workforce shortage is a crisis,” she said. “It is contributing to supply chain disruptions and rising inflation. It is undermining business growth.”

There are 10.6 million job vacancies in the United States, close to a record high. The so-called quits rate, which reflects worker confidence in being able to find a better job, climbed to 3 percent in November 2021, the latest month of available data, matching September’s record-setting level. That corresponds to 4.5 million Americans quitting their jobs in November, a record high.

Clark said boosting legal immigration would help alleviate business hiring woes while also calling for a solution for people who have entered the United States illegally as children.

“We must double the number of people legally immigrating to the U.S., and we must create a permanent solution for the ‘dreamers’—those young men and women who know no other home and who contribute to their communities, but whose legal status is in limbo,” she said.

“If we can alleviate the worker shortage, it might be the fastest thing to do to impact inflation,” she said, according to CNN.

The effect of immigration on the U.S. labor market is a matter of heated debate with implications for policy, with a common concern being that it puts downward pressure on wages. An analysis by the Center for Immigration Studies (CIS), which has advocated for limits on immigration, estimates that a 1 percent increase in the immigrant composition of an individual’s occupation reduces the wages of a native by about 0.5 percent. For low-skilled occupations, that effect is more pronounced at 0.8 percent.

At the same time, the CIS analysis notes that immigration didn’t appear to have a negative effect on the wages of natives in high-skilled occupations and may even have boosted them.

An analysis by the George W. Bush Institute found that immigration lowers the wages of competing workers while raising the return on capital for business owners and investors. Immigration also boosts demand for complementary workers, such as construction supervisors or immigration attorneys while lowering prices of goods and services for consumers, according to the analysis.

Roughly 1 million people obtained lawful permanent resident status in the United States each year from 2017 to 2019, according to Department of Homeland Security immigration statistics. This includes both status adjustments and new arrivals, which in turn include such categories as immediate relatives of U.S. citizens and refugees.

Included in the 1 million aliens are employment-based immigrant visas, with categories such as priority workers and professionals with advanced degrees or aliens of exceptional ability. These accounted for about 140,000 annual admissions between 2017 and 2019.

There are another 1.4 million temporary nonimmigrant visas issued per year, according to the Economic Policy Institute, or around 1 percent of the U.S. labor force.