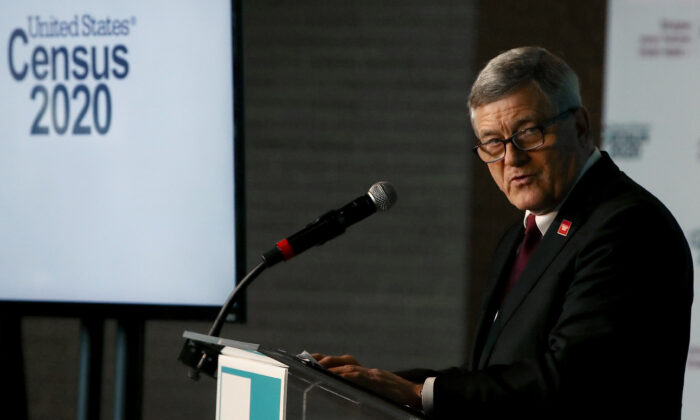 Steven Dillingham, director of the Census Bureau, speaks while unveiling the advertising outreach campaign for the 2020 Census in Washington on Jan. 14, 2020. (Mark Wilson/Getty Images)
US News

The director of the U.S. Census Bureau announced that he is retiring from a long career with the federal government, about a week after a whistleblower said he was pressuring bureau officials to collect and report data on non-citizens before the Jan. 20 transition.

Director Steven Dillingham, a President Donald Trump appointee, said in a statement Monday that he is retiring from the bureau on Wednesday, almost a year before his appointment expires, but added that his retirement was planned and not due to the whistleblower’s complaint.

“Whistleblower complaints must be taken seriously and appropriate steps taken as quickly as possible,” he wrote. He said that there was no suggestion that the data collection was in “violation of laws, rules, or regulations.”

Dillingham continued, “From what I understand, the reported whistleblower concerns appear to be misunderstandings regarding the planned process for the review and potential postings of data, and the agreed-upon need to apply data quality standards. A variety of factors may have contributed to misperceptions and heightened concerns associated with a limited request for a professional review of administrative data, for purposes of improving estimates—not for delivering 2020 Census apportionment data which the Bureau had determined was weeks away.”

The Census Bureau last month said it would miss a year-end deadline to produce the population count and data on the citizenship status of U.S. census respondents won’t be finalized or released until after President Donald Trump leaves office, putting his push to exclude illegal immigrants from apportionment in jeopardy.

In his outgoing press statement, Dillingham also said he and his staff worked tirelessly to ensure the census count.

“Still, I know many Census Bureau professionals have worked harder and longer hours than me on the 2020 Census, and they performed magnificently. I fully expect that President-Elect Biden will have complete confidence in the results that he will announce.”

Census Bureau workers were ordered last week to stop complying with Trump’s executive order to collect data on the immigration status of people living in the United States, the bureau’s director said.

Dillingham said in a Jan. 13 memo that he’s informed officials at the agency “that those involved should ‘stand-down’ and discontinue their data reviews.”

Dillingham was writing to Peggy Gustafson, the inspector general for the Department of Commerce. She told Dillingham on Jan. 12 that several whistleblowers at the Census Bureau informed her of a directive that the production of a report that includes data on legal and illegal immigrants was the “number one priority” for the director. The whistleblowers said Dillingham set a Jan. 15 deadline for the report.

The report relates to Trump’s 2019 executive order directing all executive agencies to share data concerning immigration with the Department of Commerce. Trump issued the order after the Supreme Court blocked him from adding a question about citizenship to the census.