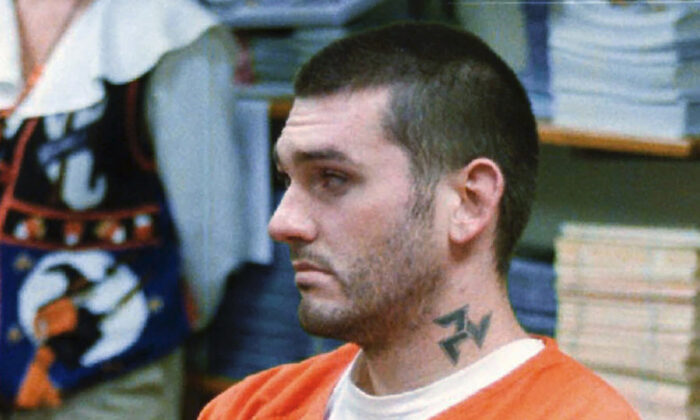 Daniel Lewis Lee waits for his arraignment hearing for murder in the Pope County Detention Center in Russellville, Ark., on Oct. 31 1997. (Dan Pierce/The Courier via AP)
US News

US Carries Out First Federal Execution in 17 Years

The first federal execution in the United States in nearly 20 years took place on Tuesday after the Supreme Court overruled a lower court’s order.

Daniel Lewis Lee, 47, who murdered a family of three in Arkansas in 1999 as part of an effort to get money for a white supremacist group, was put to death by lethal injection at FCI Terre Haute, a federal prison in Indiana.

“I didn’t do it. I’ve made a lot of mistakes in my life, but I’m not a murderer,” Lee said just before he was executed, according to The Associated Press.

“Today, Lee finally faced the justice he deserved. The American people have made the considered choice to permit capital punishment for the most egregious federal crimes, and justice was done today in implementing the sentence for Lee’s horrific offenses,” Attorney General William Barr said in a statement.

An attorney for Lee, Ruth Friedman, said the choice to carry out the execution during the COVID-19 pandemic was “shameful.”

Lee spent four hours on a gurney as the final clearance from a judge was finalized, the attorney said, claiming she was not given notice of the execution.

“We hope that upon awakening, the country will be as outraged as we are,” Friedman said in a statement.

The execution was scheduled for July 13 but was delayed because a lower court issued an injunction based on a claim that the execution could violate the Eighth Amendment’s prohibition on “cruel and unusual punishment.”

In their ruling issued early Tuesday, Supreme Court justices in the majority said plaintiffs did not establish that they were likely to succeed on the merits of their claim.

Using pentobarbital sodium to execute inmates doesn’t appear to violate the Eighth Amendment, the justices said, pointing to five states using it for executions and the drug being utilized for over 100 executions without incident.

Pentobarbital sodium “has been repeatedly invoked by prisoners as a less painful and risky alternative to the lethal injection protocols of other jurisdictions,” the justices wrote. The use was upheld by the Supreme Court last year and by numerous courts of appeals.

“Against this backdrop, the plaintiffs cite new expert declarations suggesting that pentobarbital causes prisoners to experience ‘flash pulmonary edema,’ a form of respiratory distress that temporarily produces the sensation of drowning or asphyxiation,” the majority wrote.

“But the government has produced competing expert testimony of its own, indicating that any pulmonary edema occurs only after the prisoner has died or been rendered fully insensate. The plaintiffs in this case have not made the showing required to justify last-minute intervention by a federal court.”

In a dissent, Justice Stephen Breyer, joined by Justice Ruth Bader Ginsburg—both nominated by former President Bill Clinton—claimed that the death penalty itself may violate the U.S. Constitution.

Breyer argued that keeping Lee on death row for 20 years undermines the rationale for the penalty, which “is often imposed arbitrarily.” He pointed to the co-defendant of Lee being sentenced to life in prison despite committing the same crime.

“In doing so, the court accepts the government’s artificial claim of urgency to truncate ordinary procedures of judicial review. This sets a dangerous precedent,” she wrote.

“The government is poised to carry out the first federal executions in nearly two decades. Yet because of the court’s rush to dispose of this litigation in an emergency posture, there will be no meaningful judicial review of the grave, fact-heavy challenges respondents bring to the way in which the government plans to execute them.”

Two other men are scheduled to be executed this week.

Wesley Ira Purkey violently raped and murdered a 16-year-old girl before dismembering and burning the girl’s body. He was also convicted of murdering an 80-year-old woman.

Dustin Lee Honken fatally shot five people—two men who planned to testify against him and a single mother and her 10-year-old and 6-year-old daughters.

Keith Dwayne Nelson, who kidnapped and raped a 10-year-old girl before strangling her to death, is slated to be executed next month.