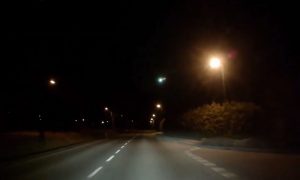 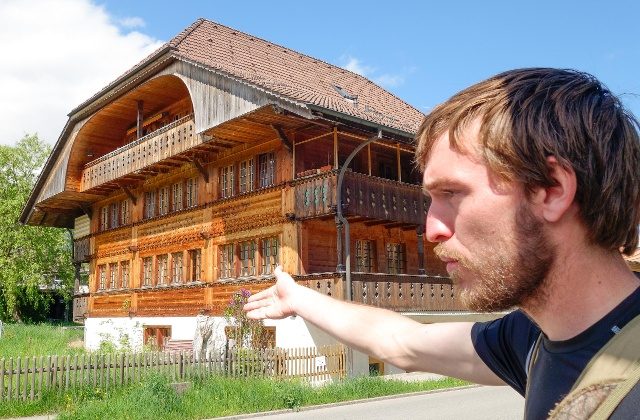 US Carpenter Finds Timber – and Roots – in Bern

For a Dozen American Carpenters and Wood Enthusiasts on an 11-day Tour of Switzerland, the Best Sights Are Well Off the Beaten Track.

“That’s one – that’s one of the buildings!” grins David Bähler, visibly tickled to see the handiwork of one of his ancestors. The timber framed house from the 1700s is adorned with geraniums, cowbells and red gingham curtains. In other words, it couldn’t look much more Swiss.

Bähler is a 26-year-old carpenter from Indiana in the American Midwest, but his roots are in canton Bern. He’s a member of the fourth generation of Swiss descendants born in the US after his forebears – Anabaptists – fled for religious as well as economic reasons.

“We’ve maintained contact all that time. We still consider Switzerland to be the homeland because it’s not a situation where we left because we thought America was better. We left because we had to,” Bähler tells swissinfo.ch.

Now he’s back in the Bernese Oberland, at least for a little while. A member of the US-based Timber Framers Guild, he came over to lead an 11-day tour of some of Bern’s finest wooden structures – including a few built by his forefathers.

“Our main focus is on Swiss carpentry, especially in the canton of Bern, which, in my opinion, shows one of the high points of Swiss wooden architecture,” says Bähler, accompanied by a group of 11 American carpenters, timber framers and others interested in studying the local building styles. “Some are really looking for inspiration, for new ideas, things they can adopt. For others, it’s more of a vacation.”

Inspiration is abundant according to Pierre Jacquet, author of The Swiss Chalet. “The mountain chalet, and more particularly the Swiss chalet (and even more the Bernese Oberland chalet) was made to represent an idyllic way of life faithfully reflecting that Golden Age for which the Greek, Roman and Middle Age poets and artists have also yearned,” he wrote in his 1963 book.

He noted that in particular, the wooden dwellings built in the 18th century “played an essential role in [what was then a] new way of appreciating the relationship between man and nature”.

On Day 4, after stocking up on provisions at the bakery in Blumenstein, Bähler and his group tackle the Stockentaler Hausweg, a route studded with stunning examples of wooden homes and barns from the 17th and 18th centuries.

In a lengthy treatise on Swiss timber buildings, German-Swiss architect Ernst Gladbach (1812-1896), described the significance of the examples found in the Bernese Oberland.

“Houses built in the Bernese Oberland in the second half of the 18th century – when the baroque style was spreading – represent the absolute Swiss highlight in terms of ornamental shapes and colours,” wrote Gladbach. After that, Swiss architecture reverted to more classic and simple forms.

With exceptions, of course. For the American visitors, a pop quiz at the start of the tour proves surprising.

“How old do you think that house is?” asks Bähler, pointing across the main street. Without seeing the year carved into the wood, people would have guessed a couple of hundred years old. In fact it dates back to just 1989 – highlighting the enduring popularity of the ornate style.

Is it OK to do this, or is it somehow “cheating”? Historic preservation joiner and restauration specialist Michael Cuba of Connecticut praised the surviving tradition.

“Here in Switzerland, I’m glad to see to see they’ve done something that works really well, and they’ve stuck with it and made technical improvements as technologies have advanced. And the continuity that you feel when you’re walking through these towns is tremendous. It’s not such a hodgepodge of different styles. I really appreciate that,” Cuba says.

However, one hodgepodge construction stops the tour group in its tracks. It’s a three-storey chalet with an elegant concrete stairway leading to a balcony. As one woman ventures closer to inspect the steps, the owner appears and beckons. Moments later, the whole group finds itself inside the magical workshop of artist-carpenter-builder Rolf Winkler.

It’s bursting with tools and antiques, and soon the timber pilgrims are poring over old building plans and sniffing freshly shaved cedar. Winkler, who has relatives in Ohio, also takes them out back to show them model cottages he made with repurposed wood. Conversation is possible thanks to Bähler’s Swiss-German and the German spoken by a couple of tour members. Then it’s “widerlüage” – see you later – as the group hits the trail again.

Growing up, Bähler spent time around people speaking Swiss-German and Pennsylvania/Amish German – which makes it easier for him to pick up the local lingo. He studied High German as well. It all comes in handy while interacting with people they meet during the tour, like the carpenters at work in a large, gutted farmhouse.

Upon learning that Bähler and his crew are in the timber trade, the carpenters invite them to come inside and check out the painstaking renovations underway in the listed building. For example, original wood is left in place wherever possible – even if it means a fiddly repair with portions of fresh wood.

“It’s a great opportunity to actually see a work in progress and something old torn apart – to look inside and see the guts. We went to Ballenberg and you could poke around inside, but here things are actually pulled apart, with original pieces lying on the ground, and you can really get a better idea,” Bähler says. By Ballenberg he means the Swiss open air museum with traditional structures from all over the country. It was a hit with tour group members, including Al Wallace, president of the Energy Environmental Corporation in Colorado.

“I find it amazing, especially in the context of 15th – 17th century homes in Ballenberg, that we believe that ‘green’ technologies are a modern phenomenon – especially when you look at how these old buildings are ventilated for moisture control, oriented for passive solar, and with windows installed to capture this energy in winter but shaded in winter. The technology is centuries old,” marvels Wallace, who points out a few more “green” constructions over the course of the day.

Author Jacquet also praised the Bernese Oberland style. “Its construction is admirable because of the way the high straight and flexible trunks of mountain pine-trees are used; for centuries, they can bear enormous differences in temperature, ice-cold nights followed by torrid days, without the resistance of the material ever diminishing.”

By the time they reach the first Bähler building – the cute one with the geraniums – it’s fairly late in the afternoon.

“It’s pretty weird,” says David Bähler when asked what it’s like to see a house built by an ancestor. “I’ve studied and seen pictures of these houses, so it’s pretty neat to actually see one and know my connection to it.” There are several others nearby, showcasing the talent of a few Bähler generations, and typically with the term “Zimmermeister” – master carpenter – carved into the woodwork.

Asked if carpentry is in his blood, Bähler says he likes to think so.

“My father and grandfather were farmers, not carpenters – their attempts at carpentry were generally very poor, not having had any training or experience. But it’s something I’ve always been interested in. Me and my brothers were always making and building things,” Bähler recalls.

He strongly identifies with his Swiss heritage, saying that his family has always thought of itself as Swiss – eating lots of Swiss-style food and cheese, and listening to traditional music, including alphorns and yodelling.

“It’s our heritage and we like to hang on to that,” Bähler says.