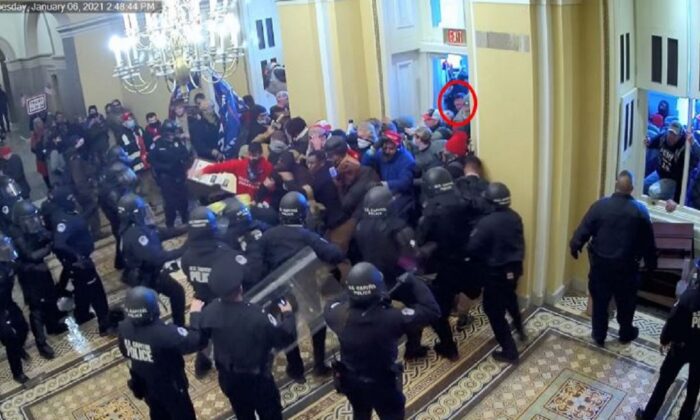 An individual identified by prosecutors as Daniel Egtvedt enters the U.S. Capitol on Jan. 6, 2021. (DOJ via The Epoch Times)
Jan. 6 Coverage

Letting a Jan. 6, 2021, defendant photograph and measure parts of the U.S. Capitol not normally open to the public would endanger the security of the building, the U.S. Capitol Police (USCP) told a judge this week.

“Allowing a defendant to take the requested measurements would compromise the security of the U.S. Capitol by exposing security features and vulnerabilities,” Sean Gallagher, the USCP’s acting assistant chief for uniformed services, said in a filing.

The rare affidavit was lodged after Daniel Egtvedt, the defendant, through his lawyers asked that the government be forced to let the lawyers and a defense investigator access to multiple non-public areas of the building.

The access is needed to prepare the defense for Egtvedt’s upcoming trial, the lawyers said in a motion.

Kira West and Nicole Cubbage, the lawyers, have taken part in two tours of the Capitol in preparation for defending Egtvedt and others, but there was a dispute over entering a space called the Hall of Columns and inspecting the Senate Wing Doors, located at the end of the upper west terrace and breached during the Capitol breach.

A list handed to the lawyers during the tour said the Senate doors were non-public. Despite the Hall of Columns being listed as public, the attorneys say they were blocked from entering.

The lawyers want to inspect, photograph, and measure the areas as they prepare for the upcoming trial, which has been repeatedly delayed and is currently scheduled to start on Dec. 5.

Egtvedt was captured on surveillance cameras entering the doors at approximately 2:48 p.m. on Jan. 6 and proceeding into the hall.

The USCP’s lawyers rejected the attempts to enter the hall and inspect the doors “because of established protocols with our oversight and the House and Senate,” West and Cubbage said in the motion to compel the government to allow access. “Access to the areas stated in the attached letter to government counsel are necessary and relevant to producing evidence for use at trial in Mr. Egtvedt’s defense,” they wrote.

Prosecutors and Gallagher, the USCP official, argue that providing the lawyers with the tours and video footage that shows Egtvedt’s movements on Jan. 6 is sufficient.

“The government has provided the defense with extensive discovery, in the form of organized crime scene walk throughs and thousands of hours of video footage from January 6, 2021, that enable the defendant to ‘inspect’ the U.S. Capitol,” Colleen Kukowski, an assistant U.S. attorney, wrote in opposition to the defense motion.

She said the defense lawyers had failed to show the images and measurements are material to preparing for the trial.

Gallagher and the prosecutor said granting the motion would endanger Capitol security.

Allowing the defense to measure distances “would provide a wealth of information to an adversary who might wish to calculate blast distances,’ the ability to fly a drone within the building or how large of a group could quickly pass through the hallways, to name but a few security risks,” Gallagher said.

Federal law says that related “security information,” or sensitive information related to the Capitol, can only be released with authorization from the Capitol Police Board, which does not often clear such a release.

But the video provided is not enough because the recordings are “incomplete and prejudicial to the defendant,” the defendant’s lawyers said.

Egtvedt is accused of illegally entering the Capitol before clashing with law enforcement officers. He has been charged with assault of a federal officer, obstruction of Congress, and disorderly conduct, among other counts.

The measurements are crucial to figuring out the distance between an officer who sprayed Egtvedt with chemical spray, and the time needed to traverse the path he allegedly took that day, according to the defense.

West declined to comment. She told The Epoch Times in an email she did not know when the court would rule on the matter.