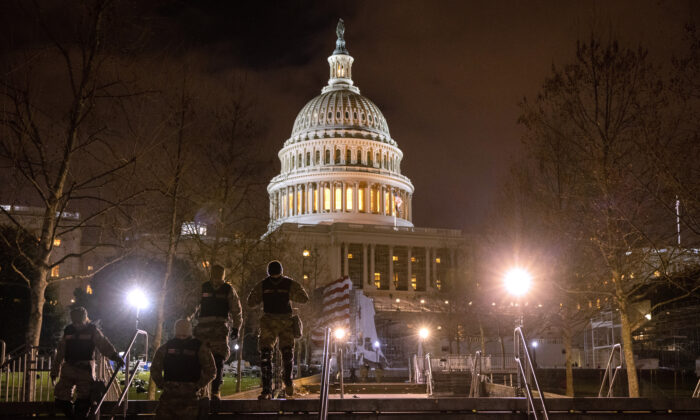 National Guard troops patrol the grounds of the U.S. Capitol in Washington, on Jan. 6, 2021. (John Moore/Getty Images)
US News

“These individuals actively attacked United States Capitol Police Officers and other uniformed law enforcement officers with metal pipes, discharged chemical irritants, and took up other weapons against our officers. They were determined to enter into the Capitol Building by causing great damage,” the police force’s chief, Steven Sund, said on Jan. 7 in a statement.

As the individuals forcing their way toward the House chamber, where members of Congress were sheltering in place, a sworn U.S. Capitol Police employee “discharged their service weapon, striking an adult female,” Sund said.

The female was later identified as Ashley Babbitt (also spelt Ashli), a U.S. Air Force veteran, Sund said. She was 35. Medical assistance was given to Babbitt before she was taken to the hospital, where she was pronounced dead, Sund said.

The U.S. Capitol Police employee who discharged their weapon was placed on administrative leave pending a joint investigation with the Metropolitan Police Department into the matter. Video footage showed a male firing his weapon and striking her.

Police Chief Robert Contee III told reporters during a press conference on Jan. 7 that his department is handling the probe into the death. Three additional deaths took place on Capitol grounds, but their circumstances weren’t detailed.

“No one has contacted us,” a family member told the San Diego Union-Tribune. “No official person has gotten back to us despite the many phone calls.”

Babbitt’s ex-husband, Timothy McEntee, stated that she was “a wonderful woman with a big heart and a strong mind,” according to the Washington Examiner.

“I am in a state of shock and feel absolutely terrible for her family,” McEntee said. “She loved America with all her heart. It’s truly a sad day.”

In the statement, Sund said the breach of the Capitol by protesters was unprecedented.