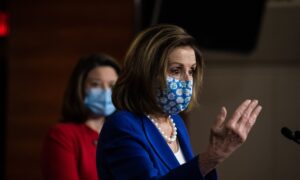 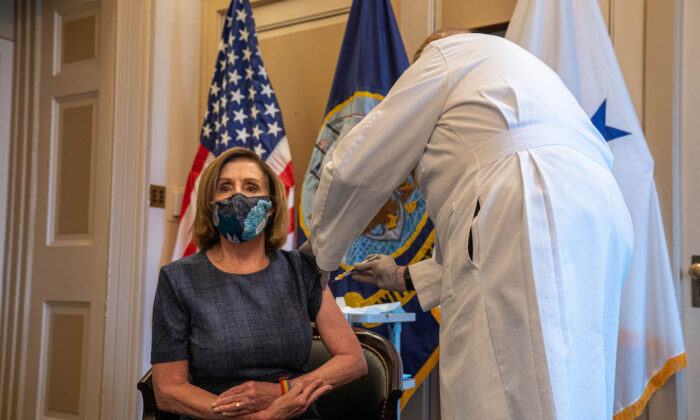 Speaker of the House Nancy Pelosi (D-Calif) receives a COVID-19 vaccination shot by Dr. Brian Monahan, attending physician of the Congress of the United States, in her office on Capitol Hill in Washington, on Dec. 18, 2020. (Ken Cedeno-Pool/Getty Images)
Congress

The Capitol attending physician, Dr. Brian Monahan, announced Friday that masks will no longer be required on the floor of the U.S. House of Representatives.

The rule change comes as 85 percent of Capitol Complex employees have been fully vaccinated, significantly decreasing the threat of virus transmissibility.

Besides House members, staff and visitors can also go maskless inside the Capitol Complex if they have been fully vaccinated, but those who have not gotten the shots still need to wear masks and socially distance.

At the start of the pandemic in 2020, House Speaker Nancy Pelosi (D-Calif.) ruled that all members and aides must wear masks in the halls of the House except when they are speaking.

While the Senate chose not to implement any mask requirements, the House’s mask rules became a point of contention between Democrat and Republican members.

The US Centers for Disease Control and Prevention’s (CDC) guidance on the pandemic as of May 28 states that people who are fully vaccinated do not need to wear a mask or practice social distancing indoors or outdoors, living aside certain circumstances.

Despite the CDC update, Monahan said that masks still had to be worn on the House floor, with Pelosi saying then that the chamber would keep its mask rules in place until more members of Congress were vaccinated.

Republican lawmakers have resisted the House mask rules, resulting in some getting fined or reprimanded.

In May, House Minority Leader Kevin McCarthy (R-Calif.) led Republicans in introducing a resolution to end the chamber’s mask rule, but it was later scrapped.

“The continued House mask mandate hinders the ability of the House to properly and effectively conduct the people’s business,” the GOP resolution reads, citing the new CDC recommendations.

Republicans have also been opposed to the proxy voting and remote attendance by House members and have on multiple occasions throughout the pandemic called on the speaker to end the practice, pointing to the Senate’s example. From the beginning of the pandemic, Senate leader Mitch McConnell (R-Ky.) has been opposed to mandating masks and proxy voting, saying there are other ways to deal with the health risks.

In May 2020, the House voted 217-189 to adopt House Resolution 965, which authorized the Speaker to designate a period during which one member may cast a vote for, and even “record the presence of,” up to 10 other members.

It is not clear when the Speaker will end proxy voting and go back to pre-pandemic House procedures, which require members to be present for all committee activities and votes.

Rep. Rodney Davis (R-Ill.) recently called on Pelosi to not only end proxy voting, but open the “people’s house” for all normal activities, including constituents’ visits to their representative’s office.

“I’m desperate for constituents to visit their member of Congress’s office without being escorted. I’m desperate for hearing rooms that are sitting empty throughout these buildings, paid for by the taxpayers, waiting for them to reopen. This is the people’s house. We should act like it,” said Davis in a video statement on Thursday.

“Many states in America are open, DC is set to fully reopen June 11. The House still does not have a reopen date, a day to open to visitors or end proxy voting and remote committee hearings and requiring members to come back to DC,” added Davis.