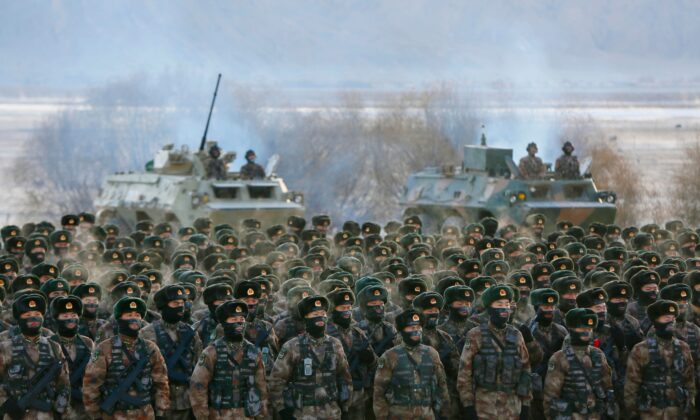 US ‘Cannot Be Certain’ of Military Victory Against China: Report

The United States cannot be assured of victory in the event of war with China, according to a new report by an influential U.S. congressional advisory body.

The analysis by the U.S.-China Economic and Security Review Commission (USCC) comes amid rising concerns that the United States could be drawn into a war over the future of the self-governed island of Taiwan, which China’s communist regime considers to be a breakaway region.

The report was delivered just two days after the first virtual summit between President Joe Biden and Chinese Communist Party (CCP) General Secretary Xi Jinping, which failed to deliver any concrete breakthroughs on a range of tensions between the two countries.

“Just as General Secretary Xi and other Chinese leaders cannot be certain the PLA [People’s Liberation Army] would prevail in a war, leaders in the United States and Taiwan cannot be sure their militaries would deter or defeat the PLA,” the report said.

The bipartisan report found that, for the first time, the Chinese military was prepared to successfully carry out an invasion of Taiwan regardless of the intervention of the United States. It also found that efforts to modernize China’s military and expand its nuclear capabilities had increased the risk of such a war.

“The Chinese are at or near an initial invasion capability,” said commissioner and former Senator Jim Talent during a Nov. 17 launch event for the report. “Which means the ability to conduct a land invasion of Taiwan, even assuming American intervention, albeit at very high risk.”

That conclusion is in line with other analyses, such as a recent report published by Taiwan’s Ministry of National Defense, which said that the PLA could effectively blockade the island’s ports and airports, stymieing American and allied efforts to assist the island in wartime.

Likewise, the USCC report is not the first time that the feasibility of American victory in a war with China has been called into question.

Rep. Mike Gallagher (R-Wis.) said in October that the United States would “probably lose a war” with China if such a conflict were to happen before the construction of new naval vessels slated for the 2030s.

Those comments in turn reflected findings from results of a wargame that suggested the United States would struggle to meaningfully respond to limited military action by the PLA in the Indo-Pacific. It also underscored a growing concern in the defense and security sectors with apparent U.S. military decline in the face of unprecedented PLA expansion.

Republicans introduced legislation in early November that would send billions of dollars to Taiwan every year to increase its asymmetrical military capabilities, but the likelihood that the small island could sustain a defense against a PLA invasion, much less repel it, is slim.

The report also found that the PLA’s modernization efforts, including rapid expansions of its amphibious assault and nuclear capabilities, placed the continued deterrence of conflict in the Taiwan Strait in a place of “dangerous uncertainty.”

“Improvements in China’s military capabilities have fundamentally transformed the strategic environment and weakened the military dimension of cross-strait deterrence,” the report said.

“China’s increasingly coercive approach to Taiwan puts almost daily pressure on the cross-Strait status quo and increases the potential for a military crisis.”

The report noted that China’s defense industry could surge construction of additional naval fleets. Further, it said that the PLA’s modernization was designed “with the explicit goal of developing the capability to forcibly annex Taiwan.”

The report found that, in addition to achieving initial capability for a successful invasion of Taiwan, the Chinese regime was also growing increasingly likely to pull of such move. There was a risk, it warned, that a failure by U.S. leadership to demonstrate adequate resolve could encourage just such an action.

“A deterrence failure is most likely to occur if Chinese leaders believe the United States is not militarily capable of or politically willing to intervene, or if they interpret ambiguities in U.S. policy to mean that opportunistic Chinese aggression against Taiwan will not provoke a decisive U.S. response.”

The risk of a CCP-driven conflict is not limited to Taiwan, however. The report also detailed and reflected the difficulties associated with confronting a global China with increased nuclear capabilities.

Experts have warned that the CCP is in a “sprint” to nuclear superiority, and a Pentagon report released in October found that China’s military would likely have 1,000 nuclear warheads by 2030. Likewise, Sen. Angus King (I-Maine) said that the CCP was uninterested in nuclear non-proliferation.

The USCC report confirms those views and builds upon them.

“China’s nuclear buildup puts it on a path to become a qualitative nuclear peer of the United States in around a decade, with a similarly diversified, precise, and survivable force,” the report said.

The report stated that the CCP is moving beyond its former policy of minimum deterrence, seeking greater nuclear capabilities and capacity than are needed to dissuade enemies from a war. Moreover, the regime would not engage meaningfully in arms control agreements, viewing them as a “trap” designed to prevent China from achieving global dominance.

The report also noted that the regime was developing new hypersonic abilities but, likely due to time constraints on publication, did not analyze the regime’s recent test of a nuclear-capable hypersonic weapon, which one U.S. diplomat said the United States did not know how to defend against.

The report found that the risk of nuclear conflict was increasing, and that the development of capabilities such as the hypersonic test, as well as the regime’s military and diplomatic posture “suggests it could also be intended to support a new strategy of limited nuclear first use.”

“Such a strategy would enable Chinese leaders to leverage their nuclear forces to accomplish Chinese political objectives beyond survival, such as coercing another state or deterring U.S. intervention in a war over Taiwan,” the report said.

Recent remarks about the hypersonic weapons test by Gen. John Hyten, the outgoing vice chairman of the Joint Chiefs of Staff, echoed the findings of the report regarding nuclear first use.

“They look like a first-use weapon,” Hyten said during an interview with CBS. “That’s what those weapons look like to me.”

Additionally, the USCC believed that the buildup and modernization could increase the potential for conventional warfare throughout southeast Asia, as the regime’s new nuclear weapons could be used to shield it from intervention from larger nations.

“There is a concern that China’s buildup is intended, and we don’t know this, but it may be intended to make the region safe for conventional warfare or coercion on the part of China,” said Commissioner Alex Wong during the launch event.

Another problem compounding the risk of nuclear catastrophe was the CCP’s adoption of so-called “launch-on-warning” protocols, in which several nuclear warheads are prepared in advance to be launched in response to a warning that the nation is under nuclear attack.

The CCP’s lack of transparency about its launch-on-warning systems or engagement in arms control talks meant that the Commission could not be sure if the Chinese regime had the appropriate technologies and protocols to prevent an accidental nuclear launch.

“It’s unclear whether China has the right protocols and command and control to prevent miscalculation, or an inadvertent launch, or a launch that’s not warranted from a perceived threat from the United States or other nuclear powers,” Wong said.

In all, the Commission recommended that the United States increase investments in developing a comprehensive diplomatic strategy, organize more nonproliferation agreements, and modernize the U.S. nuclear arsenal, in order to avoid a war the nation may not be able to win.

“The risks of a nuclear exchange between China and the United States are higher today than in the past,” the report said.

“If Chinese leaders have already changed their strategy without declaring they have done so, they could be much more likely to intentionally threaten or use nuclear weapons to achieve their regional objectives, such as deterring or degrading intervening U.S. forces in a conventional war over Taiwan they fear they could lose.”