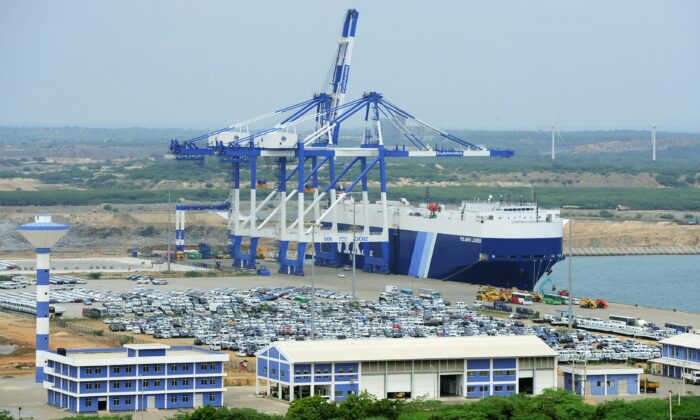 A general view of the port facility at Hambantota on Feb. 10, 2015. (Lakruwan Wanniarachchi/AFP via Getty Images)
International

An American–Canadian enterprise is claiming that corrupt actors within the Sri Lankan government fraudulently helped Chinese state affiliates to hijack the company’s legitimate development rights and products for a clean energy project at the Hambantota port.

Canadian-based developer Greenlink Global Consulting Inc. is also calling for the U.S. Congress to approve the Eagle Act, which it claims will facilitate justice in such international cases of corruption. In July 2020, the company filed claims of $400 million in damages with the Sri Lanka attorney general.

Since last year, Sri Lankan media have highlighted the controversy, as the nation has incurred massive debts to the Chinese regime.

In 2009, Sri Lanka opened itself to foreign direct investment and invited foreign investors to do business in the Hambantota port. It subsequently started its first liquefied natural gas (LNG) power station under its flagship Lanka Aloka project near the Kerewalapitiya Yugadhanavi thermal power station, about six miles from the capital Colombo.

Greenlink was already involved along with its affiliates in waste-to-energy projects in the aerospace and defense sector, as well as in high-end tourism in Sri Lanka and the Maldives. It introduced Sithe Global Power Inc, a fully owned subsidiary of Blackstone Group, in response to the Lanka Aloka project.

Blackstone is one of the largest asset managers in the world and a leading global private equity firm, according to Ceylon Today, which first broke the story of Greenlink’s project purportedly being highjacked and has continued to investigate the claim.

“After doing our due diligence on that [Lanka Aloka] project for about six to eight months, we abandoned the project due to economic reasons, as well as we found that the best location to do an LNG infrastructure project would be the location Hambantota,” Greenlink President G. Michael Fernando told The Epoch Times over the phone from Toronto.

“At that time, state-owned Chinese affiliates were building the Hambantota port and it was underutilized and at the same time, it was the best location for us to do the LNG project given that the international shipping route is in close proximity to the Hambantota port.”

Greenlink, thus backed by its feasibility studies from extensive work in Sri Lanka, brought forward a U.S.-backed investment valued at $1.4 billion called the Hambantota Energy Project (HEP). It submitted to the Sri Lanka Port Authority in May 2011 a conceptual proposal for HEP for a 25-year lease over 70 hectares (about 173 acres) of land bordering the port.

The HEP involved an import and regasification terminal for liquified natural gas and a cycle power plant for distribution to individual and industrial users along the coast. It was aiming to supply 1,200 megawatts of electric power to the national grid and particularly serve the tourism industry along Sri Lanka’s coast that contributes substantially to the country’s economy.

“Sithe Global entered into an exclusive memorandum of understanding with the board of investment in Sri Lanka for this project. This is the Sri Lankan entity that encourages foreign direct investments. And this was recommended by the senior officials who are now in the current administration who are fully aware of this project,” Fernando said, adding that at the time, Sri Lanka’s current prime minister was the country’s president and the current finance minister was heading the board of investment.

“And we had the American Embassy officials who witnessed the signing of this exclusive memorandum of understanding giving exclusivity to this LNG infrastructure project in Hambantota.”

At this point, Sithe entered into a “confidentiality and non-circumvention agreement” with two China state affiliates, China Harbour Engineering Co. Ltd. on Dec. 19, 2012, and with China Huanqiu Contracting & Engineering Corp. on Dec. 24, 2012, to develop the pipeline and the regasification plant.

Fernando claims that until 2015, there were delays due to waiting for energy reviews and policy decisions. After technical presentations to the Sri Lankan government, including a presentation to the country’s parliament in December 2015, officials from Sri Lanka’s Ministry of Power and Renewable Energy requested that Greenlink bring the Canadian government into the project, to speed up the process.

“So in February 2016, the Government of Canada through Canadian Commercial Cooperation, which is a crown agency of the Canadian government, informed the Ministry of Finance Secretary about their interest in pursuing this project,” Fernando said, adding that it was rare for Canada to offer a sovereign guarantee to a country for a project of this magnitude.

“Then the government of Sri Lanka at that time, including the former president, as well as the former prime minister, Ranil Wickremesinghe, all were informed duly by the Canadian High Commissioner in Sri Lanka.”

The Epoch Times has a copy of a letter written by then-Canadian High Commissioner Shelley Whiting to Sri Lanka’s then-minister of finance, Ravi Karunnayake, on March 15, 2016, about CCC’s support for Greenlink. Fernando asserts that the high commission received a reply only after two months, and it lacked clarity.

Fernando says that the former Sri Lankan government made Greenlink deliberately run from pillar to post despite such high-end communications, while it eventually gave the project along with Greenlink’s “confidential feasibility” studies in May 2016 to the Chinese. Memoranda of understanding with the China affiliates were signed by Sri Lanka in July 2016.

“And while we were proceeding with this process, two ministers of the Yahapalana government who were not in compliance went to China, handed over our project and feasibility studies to them. So the issue is when we approached former Prime Minister Ranil Wickremesinghe and his office, his secretary, and the advisors were in a panic mode, saying they were not informed about these internal agreements, that were signed between the state-owned Chinese affiliates and Sithe Global and the assignment of the project to Greenlink,” Fernando said.

He cited this as a lack of transparency on part of Sri Lanka’s former government, as the then-Canadian high commissioner in Sri Lanka had personally met with Prime Minister Ranil Wickramasinghe on the matter. Wickramasinghe’s personal assistant didn’t respond to a request for comment by press time.

“This project was definitely hijacked, deliberately, when one of the stakeholders like the Ministry of Power and Renewable Energy [MPE] was communicating with the Canadian High Commission, saying they want to proceed with this project,” Fernando said.

It’s hard to understand, he said, how the project could be given to China after a decade of “green signals” to HEP.

“The two other ministers, the minister of finance and the minister of international trade, were fully aware of this project. So why when one stakeholder and one minister of power and renewable energy are communicating with the Canadian government to go ahead with the project, why do they go at the same time in May to Beijing and hand over our project to them?” he said.

“Basically, the studies they handed over were our studies, they were subcontracted by the terms of references.”

Sri Lanka leased an 85 percent stake in the port in July 2017 to the Chinese for 99 years.

Greenlink registered a formal complaint about the awarding of their project to the China affiliates in December 2017 through its lawyers with the then-Sri Lankan President Maithripala Sirisena and with the Ministry of Power and Renewable Energy, but no action was taken.

Ceylon Today reports that with Sirisena’s consent, Greenlink retained Sri Lankan counsel for a mediation process on the matter in December 2018 but the process was stalled because the China affiliates didn’t respond.

Sri Lanka’s Foreign Ministry and Finance Ministry and the two China state affiliates that signed the confidentiality and non-circumvention agreement with Sithe Global didn’t respond to a request for clarification on the matter by press time.

Fernando said corrupt leaders in a country may encourage actors such as the Chinese regime to gain benefits by exploiting the leaders’ gaps. The Eagle Act that’s waiting to be passed in the U.S. Congress can address some of these issues and help bring a level playing field to international business, he said.

The act, which was introduced in May by House Committee on Foreign Affairs Chairman Rep. Gregory W. Meeks (D-N.Y.), aims to counter the policy challenges posed by China.

“The People’s Republic of China (PCR) increasingly seeks to undermine that rules-based order and challenge America’s place in it. We must leverage America’s true strengths and focus on the real challenges posed by the PRC,” Meeks said when introducing the proposal.

Fernando has pinned his hopes on the Eagle Act, and he wants Congress to approve the measure as soon as possible. He said he has been a victim of corruption that exists in international business institutions.

“We cannot change other nations who want to exploit the weaknesses of each country. But the thing is, when we try to go after these corrupt politicians, leaders, it is really difficult. It’s a long process,” he said.

“Because at the moment, business is happening not on a level playing field. In other words, you would say, in a very improper manner! So this act would put the onus on leaders who do business which endangers the security of a particular region, through corrupt acts, so they can be prosecuted.”