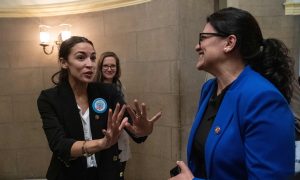 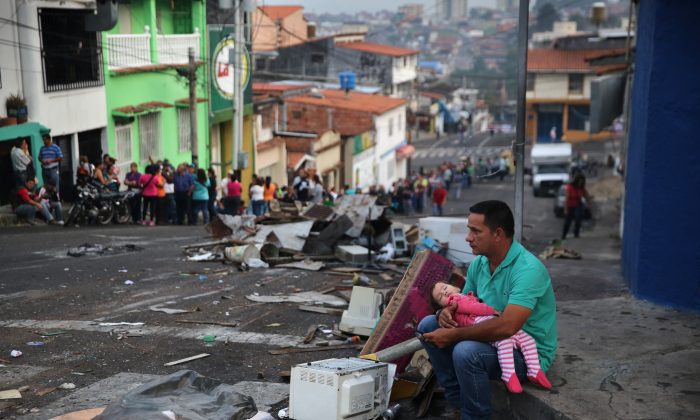 A father and daughter rest while someone holds their place before sunrise in a long line to buy basic foodstuffs at a supermarket on March 8, 2014 in San Cristobal, the capital of Tachira state, Venezuela. John Moore/Getty Images
Viewpoints

Earlier in March, a communist-led delegation from the United States and Canada arrived in Venezuela for a series of meetings with the struggling socialist nation’s senior leadership.

Several members of this delegation have a history of supporting the United States’ enemies in Tehran, Damascus, Moscow, Beijing, Pyongyang, Havana, and now Caracas. This raises major questions about whether these individuals are working against the United States with hostile foreign countries in violation of federal law.

According to the Marxist-Leninist Workers World newspaper: “Leaders of the anti-war movement in the United States arrived in Caracas on March 9 and 10 to find out firsthand the truth of how the government and population are responding to the U.S.-led attacks on Venezuela. They will use this truth to build solidarity with the worldwide efforts to stop the covert U.S. war, economic sabotage and propaganda assault on Venezuela.”

Leaders of the 13-member delegation included:

The North American delegation met with Venezuelan Foreign Minister Jorge Arreaza, who “discussed with them the historic struggle between the U.S. and Venezuela over who will control the great oil and gold resources of this South American nation,” according to the Workers World report.

According to Arreaza, Russia, China, and Turkey are helping Venezuela. “We need the solidarity of the whole world, though,” he said. “Terrorist brigades are being armed against us.”

Arreaza reportedly urged the delegates to use their combined organizational strength to defend Venezuelan socialism on the streets in North America.

“Arreaza made it clear that the Bolivarian government attaches great importance to the potential response of the people in the U.S. He said you must be in the front lines, that you are the first victims of imperialism and that the most fundamental change will happen inside the United States,” according to Workers World.

The members of the delegation and their organizations are currently working toward a major protest rally to take place March 30 in Washington. Joe Lombardo’s United National Antiwar Coalition originally called this event to “protest the upcoming 70th anniversary of NATO, set to be celebrated there by the Western warmakers on April 4,” according to Workers World. But “after the U.S. moves against the government in Caracas, the coalition refocused the March 30 action more urgently on opposing U.S. intervention in Venezuela.”

Arreaza also explained to the delegation that, in countering the nationwide electrical power blackouts, Venezuela had to deal with an “attack on the brain of its electrical system.”

“The enemy knows the weakness of the system,” he said. “The U.S. knows what Venezuela could not buy or replace. Knows what we have. This is cyber terrorism!”

The delegation also met with Dr. Carolus Wimmer, the international relations secretary of the Communist Party of Venezuela and head of the so-called “Committee of International Solidarity,” which hosted the members.

Also scheduled were meetings with Carlos Ron, the vice minister of foreign affairs for North America, and Pasqualina Curcio, an economist at the Central University of Venezuela, who blamed the United States for Venezuela’s disastrous economy.

“Curcio discussed the U.S. role in creating the ‘humanitarian crisis’ in Venezuela. These include shortages of necessities: toilet paper, corn, milk, coffee and vital medicines,” according to the Workers World report.

These individuals are effectively offering their services to enemy foreign officials to help undermine U.S. military and foreign policy to the benefit of hostile foreign powers. If they were doing this in time of declared war it would be regarded as straightforward treason.

The Foreign Agents Registration Act (FARA) requires that agents representing the interests of foreign powers in a “political or quasi-political capacity” disclose “their relationship with the foreign government and information about related activities and finances.”

Are these people registering with the Justice Department as agents of a foreign power? If not, why not?

The Trump administration is clearly working with the United States’ friends in Colombia and Brazil toward a much-needed regime change in Venezuela. This will not just be good for Venezuela but will serve U.S. strategic interests by countering Russian, Chinese, Iranian, and now, apparently, Turkish influence in Latin America.

Why are American communists and their allies being allowed to sabotage this laudable goal?