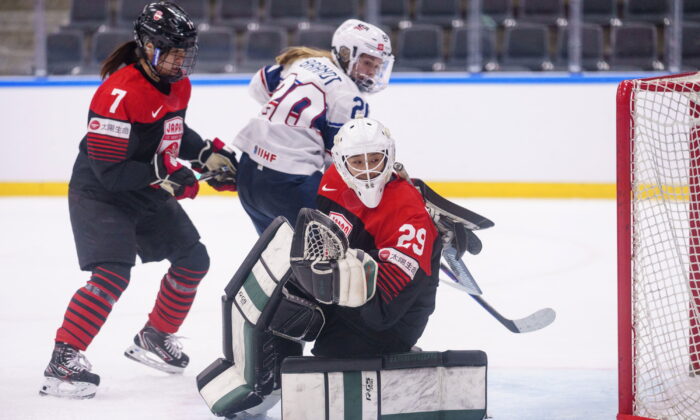 Goalkeeper Miyuu Masuhara and Kanami Seki of Japan in action with Hannah Brandt of USA during the IIHF World Championship Women's ice hockey match between Japan and USA in Herning, Denmark, on Aug. 25, 2022. (Bo Amstrup/Ritzau Scanpix via AP)
Sports

HERNING, Denmark—The United States routed Japan 10–0 in the opening game of the women’s hockey world championship on Thursday and defending champion Canada started the tournament with a 4–1 victory over Finland.

The Americans had nine different scorers against Japan, with Alex Carpenter the only player to net twice. Taylor Heise went scoreless but equaled a tournament record with five assists for the United States, which led 9–0 after two periods and outshot Japan 62–6.

Olympic and world champion Canada faced tougher resistance from Finland, the bronze medalist at the Beijing Games in February.

Finland missed a penalty at the end of the first period when Kiira Yrjanen’s shot was saved by Ann-Renée Desbiens.

In Group B, Sweden beat host Denmark 5–2 behind a hat trick from Hanna Olsson and Hungary upset Germany 4–2.

The United States next plays Finland on Saturday, when Canada faces Switzerland. The two North American rivals are both in Group A and play each other in the last preliminary round on Tuesday.

Canada beat the United States in the final of both last year’s worlds and the Olympics.