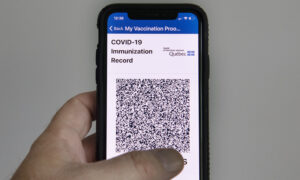 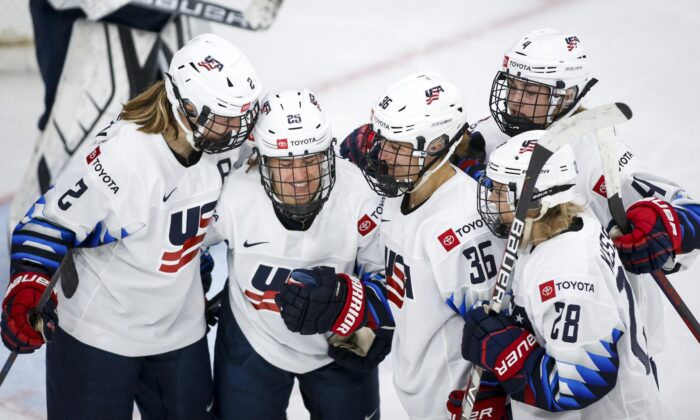 Alex Carpenter (25) of the United States celebrates her goal against Finland with teammates during the second period of an IIHF women's hockey championships semifinal in Calgary, Alberta, on Aug. 30, 2021. (Jeff McIntosh/The Canadian Press via AP)
Hockey

The United States is set to compete for a six-straight gold in the Women’s Ice Hockey World Championships (IIHF) after beating Finland 3–0 on Monday.

“I’m really happy for our team,” Joel Johnson, the head coach of the 2021 U.S. Women’s National Team, said in a statement.

“We knew we had to come out hard and fast and take away any chances for Finland and I think we did just that,” he continued. “I was really impressed by how our team controlled the tempo against a skilled team like Finland. We’re going to enjoy this win, but we’ve got one more game to play.”

Alex Carpenter put the United States on the board early with her third goal of the tournament. Carpenter got a stick on Lee Stecklein’s shot from the point to redirect it past goaltender Anni Keisala.

Abbey Murphy scored in the second period after taking advantage of a turnover at the blue line and went backhand to forehand for a shot that trickled by Keisala.

Finland, which was outshot 33–14, had a good offensive opportunity midway through the first period with a two-man advantage for two minutes, but the United States did not allow a shot.

Finland, the defending champions, emptied its net on a power play with 7:22 remaining, but U.S. goalie Nicole Hensley kept it scoreless on the way to her second shutout against Finland this tournament.

The Finns will look to claim their 13th bronze medal on Tuesday against Switzerland.

Canada Aims for First Title Since 2012

The Canadians won from Switzerland 4–0 in the other semifinal later on Monday.

Canada scored two first-period goals in less than two minutes to take control in the second semi. Renata Fast scored the first and assisted Daoust on the second. Fast one-timed a nice pass from Brianne Jenner at the back post, and Daoust redirected Fast’s shot 98 seconds later.

“We’re excited where we’re at as a group,” said Troy Ryan, head coach of the Canadian national women’s hockey team. “We’re excited for the opportunity that’s in front of us.”

It’s been nearly a decade that Canada, which ended the Americans’ 29-game win streak on Aug. 26, claimed the title at the world championship. Canada bested the United States by a score of 5–1 in the final game of the group stage.

The two North American rivals will face each other in the finals at 7:30 p.m. ET on Tuesday. This is the 19th time the Canadians and Americans have met for gold, with Canada holding a 10–8 advantage.