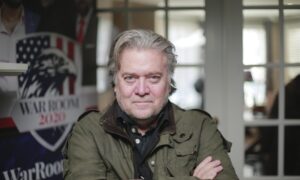 Steve Bannon: The Coming Collapse of the Tyrant Regime
0 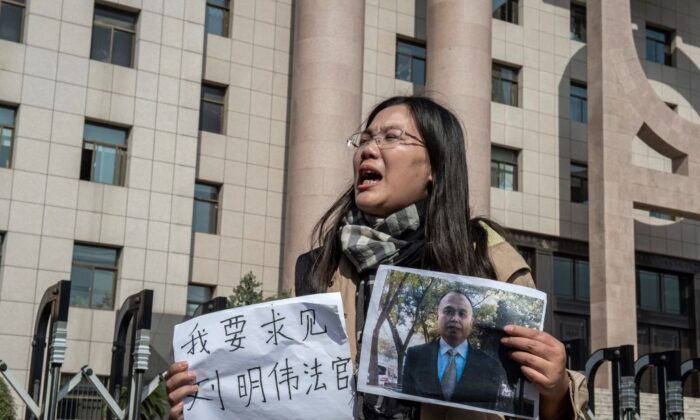 Xu Yan, wife of human rights lawyer Yu Wensheng, holds a piece of paper the reads "I want to request a meeting with Judge Liu Mingwei" and a picture of her husband outside the Xuzhou Intermediate Peoples Court in Xuzhou, China, on Oct. 31, 2019. (Nicolas Asfouri/AFP via Getty Images)
China Human Rights

US Calls for Detained Chinese Human Rights Lawyer to Be Freed

The U.S. government is calling for the release of Chinese human rights lawyer Yu Wensheng, who has been held in detention in China for over a year.

“One year ago today #YuWensheng was tried for advocating constitutional reforms on @Twitter, a platform banned in #China,” stated the Congressional-Executive Commission on China (CECC) in a tweet on May 9.

Yu drew Chinese authorities’ ire after he posted an open letter on Twitter in January 2018, addressed to senior officials of the Chinese Communist Party (CCP) who gathered in Beijing for a major political meeting.

One of the constitutional reforms Yu suggested was abolishing China’s Central Military Commission (CMC), the highest military leading body of the CCP. He urged that CMC’s power be transferred to the State Council, the highest administrative organ in the Chinese government, similar to a government cabinet.

Yu argued that the Chinese military should belong to the country and not the Party.

Four months later, the prosecutor’s office in Xuzhou charged him with obstructing the administration of public order and “inciting subversion of state power”—a catch-all charge that the Chinese regime often uses against dissidents.

Yu’s wife, Xu Yan, said that her husband was placed on a secret trial at the Xuzhou Intermediate People’s Court without her knowledge on May 9, 2019.

He has not been sentenced, and is unclear where he is currently being detained.

The Working Group on Arbitrary Detention, a United Nations working group, declared that there was no legal basis for Yu’s detention and deprivation of Yu’s liberty was “contrary to article 7 of the Universal Declaration of Human Rights,” according to an opinion issued on May 29 last year.

Speaking to the Chinese-language Epoch Times earlier this month, Xu said that authorities did not allow her nor her husband’s lawyer to meet with Yu since his detention in January 2018.

In a video posted on her Twitter account on May 1, a teary-eyed Xu urged foreign ambassadors to press Beijing to release her husband. “He is not guilty. He is just performing his duties as his lawyer, and exercising the right to freedom of speech granted by the [Chinese] Constitution,” she said.

This is not the first time that the U.S. government expressed concerns about Yu’s case. On April 20, spokesperson for the U.S. State Department  Morgan Ortagus called on “the release of all those unjustly detained” in China, including Yu, in a press release.

“We remain concerned by the PRC’s [People’s Republic of China] weak rule of law, arbitrary detentions, torture in custody, and continued violations and abuses of the human rights and fundamental freedoms of individuals inside its borders,” Ortagus added.

Yu defended, unsuccessfully, for the case of fellow human rights lawyer Wang Quangzhang, who was recently released after serving a 4.5-year sentence on charges of “subverting state power.”

Like Wang, Yu also represented activists and adherents of the spiritual group Falun Gong, a meditation practice that has been severely persecuted by the regime since 1999.

The German government’s human rights commissioner Bärbel Kofler, and the French ambassador-at-large for human rights François Croquette issued a joint statement on May 9 about Yu’s case.

“We take the anniversary of his trial as an opportunity to reiterate our concern that his family has not received any information about Yu Wensheng’s trial status, verdict, or personal situation since then,” the joint statement said. “We appeal to the Chinese institutions to lead the process according to the rule of law.”