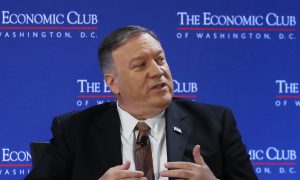 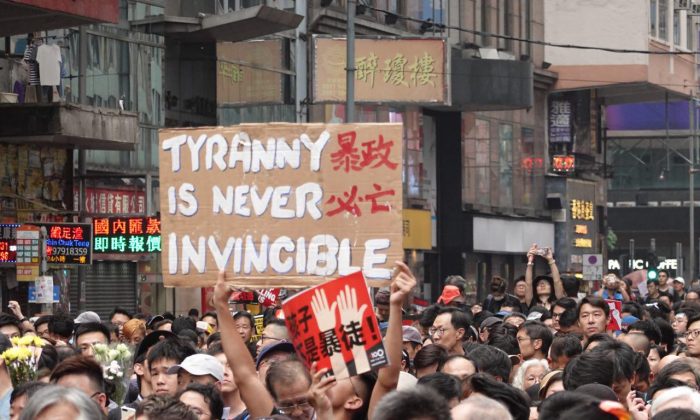 The U.S. State Department has refuted claims by Beijing that the United States is “interfering in Hong Kong’s affairs,” and said Hong Kong protesters have legitimate concerns that have sparked mass demonstrations for more than two months.

“The ongoing demonstrations in Hong Kong reflect the sentiment of Hongkongers and their broad concerns about the erosion of Hong Kong’s autonomy,” a State Department spokesperson told The Epoch Times in an email.

“It is not credible to think that millions of people are being manipulated to stand for a free and open society.”

The official also referenced Secretary of State Mike Pompeo’s recent statement that it’s “ludicrous” to think the United States is behind the protests.

The response followed a warning from Beijing, after a U.S. diplomat recently met with prominent Hong Kong pro-democracy activists.

Local pro-Beijing newspaper Ta Kung Pao published a photograph of the diplomat, identifying her as Julie Eadeh. The photo shows her talking with the activists inside a hotel. The report also included information about the diplomat’s family members.

Responding to China’s reaction to the meeting, U.S. State Department spokesperson Morgan Ortagus said at an Aug. 8 press briefing that it’s the job of U.S. diplomats to meet with different people, including opposition leaders.

“This is not only what American diplomats do. This is what other countries’ diplomats do,” she said.

Ortagus added that China had acted like a “thuggish regime” in singling out the U.S. diplomat.

“I don’t think that leaking an American diplomat’s private information, pictures, names of their children—I don’t think that is a formal protest, that is what a thuggish regime would do,” she said, though she didn’t confirm the identity of the diplomat.

Joshua Wong, leader of the local political party Demosisto and a central figure in the 2014 student-led “Umbrella Movement” pro-democracy protests, confirmed in an Aug. 8 Facebook post that he took part in a “discussion” with personnel at the U.S. Consulate General’s office in Hong Kong.

Wong said they discussed the Hong Kong Human Rights and Democracy Act, which is legislation introduced in both houses of the U.S. Congress that seeks to “reaffirm U.S. commitment to democracy, human rights, and the rule of law,” amid concerns of the Chinese regime’s interference with the city’s affairs.

The measure would require U.S. authorities to assess annually whether Hong Kong is sufficiently autonomous from mainland China to receive special treatment from the United States.

Since the city was transferred to Chinese rule from British control in 1997, the United States has dealt with Hong Kong as a separate entity distinct from China in matters of economics and trade. The arrangement is enshrined in the U.S.–Hong Kong Policy Act, passed in 1992 to address the relationship after the handover.

The areas of special treatment for Hong Kong include visas, trade, and investments.

Wong said the meeting was nothing out of the ordinary.

“I have visited Washington in the past to talk with U.S. Congress members face to face. Even more, Nathan Law met with the U.S. Secretary of State this May. In comparison, the talk with the U.S. Consulate General in Hong Kong right now is nothing special,” he wrote in a Facebook post.

After the news of the meeting was published in local media, the Commissioner’s Office—a satellite office of China’s Ministry of Foreign Affairs located in Hong Kong—urgently summoned a senior official at the U.S. Consulate General on Aug. 8 to protest the meeting.

The Commissioner’s Office told U.S. consular officials to “make a clean break” with the Hong Kong protesters, who were “stir[ring] up trouble,” according to an Aug. 8 statement. It also cautioned the United States to “stop sending out wrong signals” and “going further down the wrong path.”

Since June, Hong Kong has seen mass protests that began in response to an extradition proposal that would allow the Chinese regime to seek extradition of suspects. Locals have been out on the streets every weekend pressing for the bill’s full withdrawal, citing fears that it would further undermine Hong Kong’s autonomy and put individuals at risk of facing trial in China, where rule of law isn’t observed.

In his Facebook post, Wong said he urged the United States to stop exporting tear gas and rubber bullets to Hong Kong police, whose alleged misuse of such crowd-control gear to quell protests has triggered concern from local and international rights groups.

Police have fired more than 2,000 rounds of tear gas since June and have arrested about 600 protesters, with the youngest a 13-year-old, according to the latest police statements.

The Chinese regime and the Hong Kong administration have repeatedly asserted their support of how police have handled the protests.

Amnesty International, Human Rights Monitor, and Civil Rights Observer have called for Hong Kong police to refrain from “indiscriminate” and unnecessary use of force that poses public health risks—too much exposure to tear gas, for example, can cause cancer, they said at a joint Aug. 6 press conference in Hong Kong.

The groups added that police, in many instances, could have avoided using such aggressive weapons and opted for some less-threatening options.

“We saw police firing tear gas at distant protesters … and police using batons to hit protesters in the back of their heads, as they were running away,” said Hong Kong Human Rights Monitor’s Claudia Yip.

Wong told The Epoch Times in a recent interview: “[The police] have turned the protest zone into a battlefield. … They attack people instead of really trying to clear the protests.”

A White House petition, initiated by Wong in July, calls on the Trump administration to issue an export ban on crowd-control equipment to Hong Kong. So far, it has generated more than 110,500 signatures.

Hong Kong’s special status as an international financial hub makes it a delicate spot for both the United States and China, considering that the city has enabled the communist regime to access an abundance of foreign capital, Hong Kong-based China affairs expert and internet radio host Fong Tak Ho said.

“[Hong Kong] is a political nuclear bomb,” Fong told the Hong Kong bureau of The Epoch Times on Aug. 8.

Fong said recent U.S. legislation, under which U.S. authorities could potentially revoke Hong Kong’s special trading status, is a powerful measure to indirectly sanction the Beijing regime for its encroachment. He also suggested that the United States blacklist Hong Kong officials responsible for undermining the city’s core values of freedom and democracy, by freezing their assets or denying them entry to the United States.

The pending Hong Kong Human Rights and Democracy Act is “a clear sign that the U.S. is moving toward this goal,” he said.