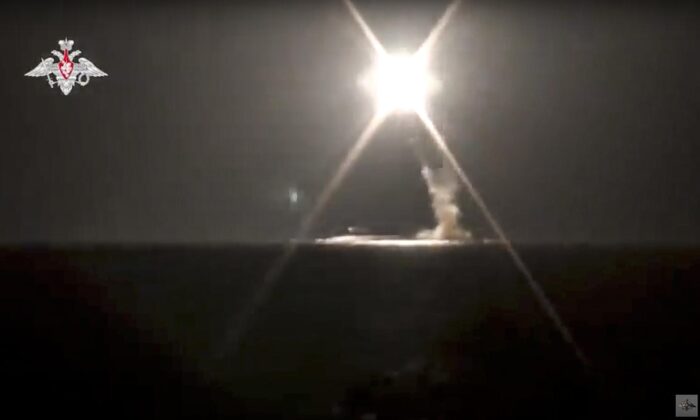 The United States is building a new satellite system to track hypersonic weapons following repeated demonstrations of such weapons by China and Russia.

The Pentagon announced two contracts on July 18, valued at a combined $1.3 billion, to develop an advanced satellite system expected to be in orbit beginning in April 2025.

The Space Development Agency (SDA) awarded contracts for two prototype missile warning and tracking systems to join the National Defense Space Architecture. The satellite constellations will provide persistent detection, warning, tracking, and identification of both conventional and hypersonic missiles across the world.

The contracts were awarded to L3Harris Technologies and Northrop Grumman. Each company will build 14 satellites that will be used to collect infrared data and provide network communications to the greater U.S. defense architecture. The companies also will provide launch services and sustainment for the satellites as part of their respective contracts.

The systems will be part of the Tranche 1 (T1) layer of the new U.S. space architecture. The T1 transport architecture was approved for development in February and will consist of 126 satellites by 2024.

Intended to provide a resilient, low-latency, and high-volume data transport communication system, the layer is part of a broader effort by the U.S. military to create a more distributed space architecture.

“SDA is confident that selection of the L3Harris and Northrop Grumman teams provides the best overall solution to accelerate delivery of a low-Earth orbit constellation with wide-field-of-view infrared sensors for a global missile warning and missile tracking capability in Tranche 1 on schedule.”

The SDA received an additional $550 million on top of its fiscal year 2022 budget to accelerate the deployment of the T1 layer in support of the U.S. Indo-Pacific Command, given the current U.S. focus on managing its rivalry with China. The new satellite systems are expected to provide increased capability to all of the military’s combatant commands, including the Indo-Pacific.

The program’s focus on locating and tracking missiles comes nearly one year after China’s communist regime secretly tested a hypersonic weapon and orbital bombardment system. That system, likely intended as a first-use nuclear weapon, alarmed many throughout the defense and intelligence communities who had believed China to be much further behind in its military modernization program.

China has continued to test new hypersonic capabilities since then, even as U.S. military leaders have said that the United States was years behind in hypersonic development, having largely abandoned it in 2011.

Now, political leaders fear that the United States is losing its ability to defend itself from foreign aggression.

As such, the nation is rushing to improve its systems. Such efforts have included not only space-based missile detection and early warning systems, such as the ones announced on July 18, but also investments into projects as wide-ranging as missile-tracking high-altitude balloons.

The U.S. military announced earlier in the month that it had successfully tested an air-launched hypersonic missile as part of its ongoing efforts to develop new hypersonic capabilities.