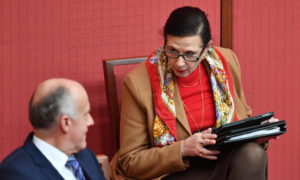 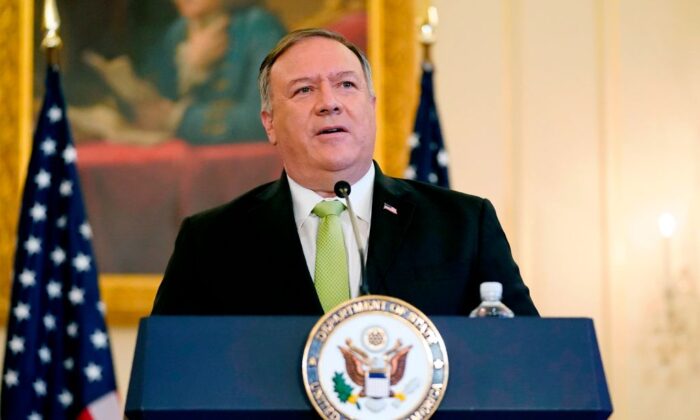 Secretary of State Mike Pompeo speaks during a news conference in Washington, on Sept. 21, 2020. (Patrick Semansk/POOL/AFP via Getty Images)
Americas

US, Brazil Both Need to Reduce Dependence on China Imports: Pompeo

BRASILIA/WASHINGTON—U.S. Secretary of State Mike Pompeo warned on Monday the United States and Brazil both need to reduce their dependence on imports from communist China for their own security.

At a virtual summit on increased U.S.-Brazil cooperation aimed at post-pandemic recovery, Pompeo underscored the importance of expanding bilateral economic ties, given what he called “enormous risk” stemming from communist China’s significant participation in their economies.

“To the extent we can find ways that we can increase the trade between our two countries, we can … decrease each of our two nations’ dependence for critical items” coming from China, he said.

“Each of our two peoples will be more secure, and each of our two nations will be far more prosperous, whether that’s two or five or 10 years from now,” he added.

The Trump administration is working to boost ties with Brazil and provide a counterweight to the Chinese Communist Party’s (CCP’s) global ambitions. Delegates from the two countries also met to sign a new agreement to boost rules-based trade opportunities.

Bolsonaro is yet to ban Brazilian telecom companies from buying 5G equipment from China’s Huawei Technologies Co. Ltd. as more countries are doing after alarm bells were raised over network security given the CCP’s control over all companies registered in China.

@klonkitchen: Huawei is “closely aligned with Beijing and required by law to quote ‘support, assist, and cooperate with national intelligence efforts.’ There’s no out. There’s no alternative. There’s no pass…Chinese gov’t also can *legally* hack into any Chinese co. they want.” pic.twitter.com/rm10S36HSn

At the summit organized by the U.S. Chamber of Commerce, Bolsonaro confirmed the signing of a protocol outlining three agreements with the United States that will ensure good business practices between the two allies and stop corruption. He said the package will slash red tape and increase trade and investment.

“In the last year and a half, together with President Trump, we have elevated Brazil-U.S. relations to its best moment ever, and opened a new chapter in the relationship between the two largest economies and democracies in the hemisphere,” he said.

Two top U.S. Democratic lawmakers slammed the Trump administration for increasing trade cooperation with Bolsonaro’s government given its “abysmal record” on human rights, the environment, and corruption. The Democrats made no mention of communist China’s abysmal human rights and environmental protection record.

“Giving President Bolsonaro ammunition to claim that the United States endorses his behavior sullies our nation’s reputation as a country that demands our trade partners respect human rights and the rule of law,” said U.S. House Ways and Means Committee Chairman Richard Neal.

Pompeo said Brazil was getting closer to joining the Organization for Economic Co-operation and Development (OECD) grouping rich nations with the support of the United States.

“We want this to happen as quickly as we can,” he said.

The U.S. Export-Import Bank would back projects valued at $450 million in Brazil this year, while the U.S. Development Finance Corp had plans involving about $1 billion in projects there, he said.

By Anthony Boadle and Andrea Shalal. The Epoch Times contributed to this report.