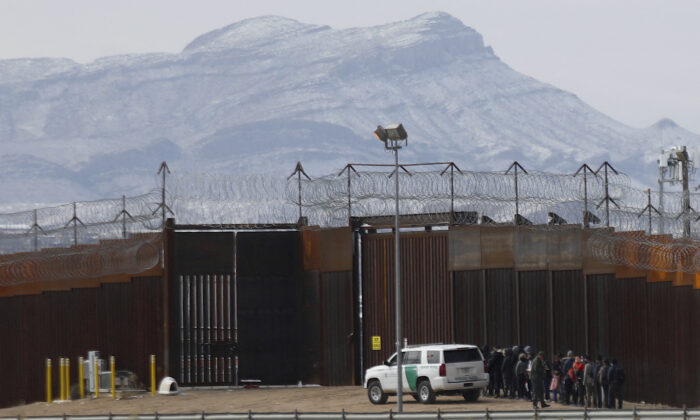 Border Patrol agents detain a group of migrants near the border wall after they entered the United States from Ciudad Juarez, Mexico, which shares a border with El Paso, Texas, on Feb. 3, 2022. (Herika Martinez/AFP via Getty Images)
Immigration & Border Security

The U.S. Border Patrol has warned migrants attempting to illegally cross the southern border about the dangerous conditions prevailing in the region that have left many dead or in dire need of medical care.

The most pressing danger while crossing the desert region is the extreme summer heat, with southern New Mexico and West Texas seeing at least 10 days of “triple-digit heat,” Border Patrol El Paso Sector Chief Gloria I. Chavez said during a June 22 press conference near the base of Mount Cristo Rey, according to the El Paso Times.

In fiscal year 2022, border agents at the El Paso Sector have rescued more than 201 illegal immigrants, a big jump compared to 40 rescues during the entirety of 2020. There have been 17 illegal immigrant deaths.

“We have different types of border barrier in the 264 miles of border between El Paso, New Mexico and Juarez. … Transnational criminal organizations continue to encourage people to climb that barrier. They use ladders to climb to the top and then they pull the ladder off leaving the person stuck at the top of that barrier to figure out how they are going to descend,” the chief stated.

Many of the illegal aliens tend to fall from the barrier, get injured and eventually get admitted to a hospital. Some of them have died as they could not find a way down the barriers, she added.

Some illegals attempt to cross via U.S. canals. But the recent increase in water levels has “already taken the lives of several migrants this year,” Chavez said.

Border Patrol agents along the southern border apprehended over 7,500 illegal aliens per day in May, much higher than the 4,700 daily apprehensions in January, data from Customs and Border Protection showed.

Agents from Brownsville, Texas, to San Diego, California, apprehended a total of 232,628 illegal border crossers in May, which is the highest monthly total in 23 years.

An extra 34,547 individuals were identified as having illegally entered the country but were not apprehended. In addition, 79 illegal immigrants died while crossing the border in May.

Government records also show that the deportation of criminal illegal immigrants has drastically fallen in the past year. The records “confirm that Biden administration policies have caused a sharp decline in all removals, and in the removal of criminal aliens,” Jessica Vaughan, director of policy studies for the Center for Immigration Studies, said in a blog post.