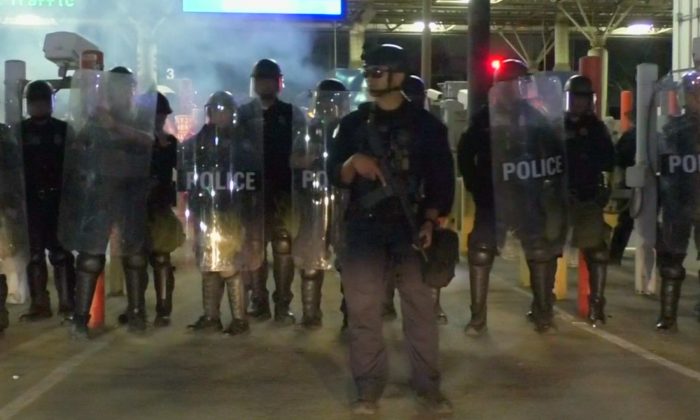 Officer in riot gear at border crossing area in Tijuana, Mexico, on Jan. 31, 2019. (Screenshot/Reuters)
US News

U.S. border patrol officers performed a series of drills near its international border with Mexico, as thousands of Central American migrants cross overland toward the northern frontier seeking asylum in the United States.

At the Tijuana crossing point late on Friday, officers laid out barb wire as part of another security operation.

Trump has hardened his stance on immigration, and specifically against the caravan of migrants. He has sought to suspend the granting of asylum to illegal immigrants who cross the U.S.-Mexico border illegally, seeking fresh ways to block thousands of Central Americans traveling in caravans from entering the United States. He has also said any migrants seeking asylum will have to wait in Mexico whilst the claim is heard.

US Starts Returning Asylum-Seekers to Mexico Under New Policy

TIJUANA, Mexico—The Trump administration launched an effort to discourage thousands of migrants from seeking asylum and subsequently disappearing into the United States—by sending them to Mexico to wait out their cases. On Jan. 28, the first one was returned to Tijuana. The migrant-heavy border city was not happy about it.

Honduran reporter Josué Cover told The Epoch Times on Jan. 17 that Honduran migrants that left with the new caravan in January are encouraged to head north by stories from those who left with the first caravan and successfully crossed the border.

I was able to interview three minors who told me ‘Well my mom went with my little sister in the other caravan and they are already in the United States, now the three of us are going.’ They are 17, 16, and 12 years old, they are going together because they believe that they will cross through.”Cover said many bring young children because they are told—by coyotes and by migrants who have successfully entered the United States—it will be easier to enter the country that way.

“The coyotes tell them ‘Please, if you are going to come, then come with a minor, with a baby, because that way you are given more support. That is, they are given the opportunity to cross to the United States.”

The Trump administration has been trying to get Congress to close the catch-and-release loophole. Under catch-and-release, illegal aliens who claim asylum are able to stay and work in the United States for years until their immigration court date—but most don’t show up.

Currently, the immigration system has about 800,000 pending cases.