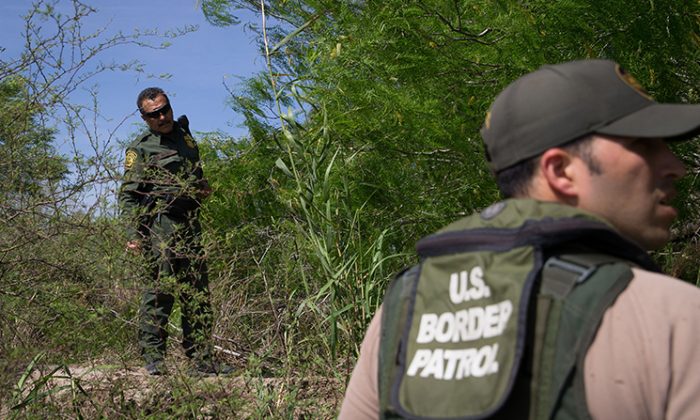 U.S. Border Patrol agents on the Texas border arrested a trio of gang members and another criminal over the July 4 holiday.

Two of the gangsters belonged to the notorious MS-13 outfit, while the third was from the rival 18th Street gang.

Agents at McAllen Station stopped a Salvadoran national sporting MS-13 gang tattoos. A records check indicated he was, indeed, a known member of the gang.

Agents at Kingsville Station also stopped a Salvadoran nation, this one near Sarita, Texas. Again, records showed that he was an MS-13 member.

Rio Grande City agents stopped a third Salvadoran who, records revealed, belonged to the 18th Street gang. This man had three active warrants against him in El Salvador, with charges including aggravated homicide and belonging to a terrorist organization.

The fourth criminal apprehended by Border Patrol was a U.S. citizen who was trying to re-enter the country at the Sarita Checkpoint.

When agents searched his car, they found two guns—one stolen—and ammunition, plus nine grams of marijuana, two grams of psychedelic mushrooms, and brass knuckles, all hidden in the vehicle.

The driver had an extensive criminal history.

Border Patrol agents turned over this citizen to the Kenedy County Sheriff’s Department.

On July 5, Border Patrol agents from the Three Points Station near Tucson, Arizona stopped yet another 18th Street gangster trying to enter the country illegally.

Juan Mancia-Garcia, 39, was caught after crossing the border near Sells, Arizona, and was taken to the Tucson Coordination Center for processing.

A records search revealed that not only was Mancia-Garcia a known gang member, he had been seized and deported many times previously.

U.S. Customs and Border Protection officials ask all citizens to assist them in their efforts to keep the country’s borders secure.