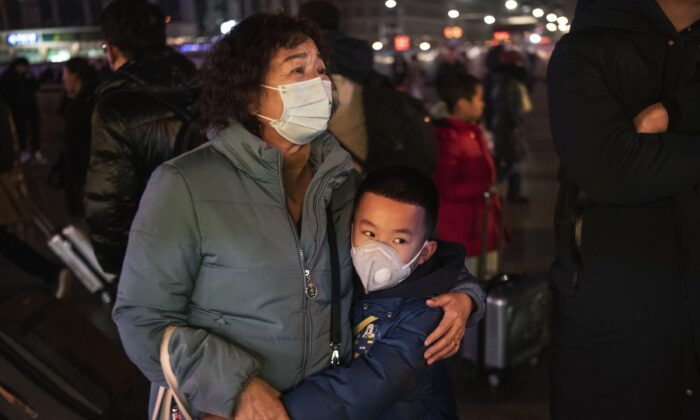 A Chinese boy hugs a relative as she leaves to board a train at Beijing Railway station in Beijing, China on Jan. 21, 2020. (Kevin Frayer/Getty Images)
CCP Virus

U.S. health authorities have upgraded a travel warning for China on Jan. 21 after they confirmed the first case of a viral pneumonia that first broke out in the central Chinese city of Wuhan.

The patient is a man in his 30s living in Washington state’s Snohomish County, north of Seattle. He returned to Seattle in mid-January after visiting Wuhan, where the virus first began to spread in December 2019. Chinese authorities said the virus has claimed six lives to date.

The man visited the doctor on Jan. 19 and is currently “very healthy” but being kept in isolation, according to the Centers for Disease Control and Prevention (CDC).

On Jan. 21, the agency upgraded its precaution levels for traveling to China from level one to level two on a three-tier scale, warning travelers to exercise “enhanced precautions.” The third level would caution people to “avoid nonessential travel.”

The CDC didn’t provide details on how easily the disease can spread from one person to another, but noted they are tracking down anyone who had close contact with the patient since his return.

The CDC also said on Jan. 21 that they are going to implement screening measures at two more airports—Hartsfield-Jackson Atlanta International Airport and the Chicago O’Hare International Airport—for passengers directly flying from Wuhan. The agency also has set up an emergency operation center to coordinate the shipment of biological samples from suspected patients for lab testing, to ensure that results can come out by the following day.

The illness is caused by a new kind of coronavirus, a type of pathogen that causes diseases ranging from the common cold to SARS, or severe acute respiratory syndrome.

CDC officials said they are working with the U.S. Department of Homeland Security and Department of Transportation to redirect passengers flying from Wuhan to the five airports that are currently screening for the disease.

She added that the agency is currently in “active conversations” about vaccines for the disease, and has developed a laboratory technique to quickly diagnose the virus.

More cases were reported in nine other regions across China, including Henan, Sichuan, Shandong, and Zhejiang provinces, and in the cities of Tianjin and Chongqing.

Wuhan health authorities recently began requiring increased restrictions on vehicles coming in and out of the city. Tour groups are no longer allowed to arrange trips to areas outside Wuhan, while private vehicles go through random checks for livestock or wild animals, according to Chinese state media.

North Korea also plans to temporarily ban foreign tourists due to the worsening outbreak, according to the Chinese adventure travel company Young Pioneer Tours. The vast majority of tourists in North Korea come from China.

The tour company told Reuters on Jan. 21 that the North Korean government is closing off its borders until the viral disease is “well under control.”

The World Health Organization announced that it would hold an emergency meeting on Jan. 22 regarding how to respond to the outbreak.

The mounting anxiety led to a decrease of 0.6 percent in China’s onshore yuan, the biggest daily drop since Aug. 26, 2019, while airline and travel stocks also slipped, according to Reuters.

Experts suspect the actual extent of the outbreak to be much worse than Chinese officials are reporting.

A study led by Gabriel Leung, dean of the University of Hong Kong’s medical school, estimated that more than 1,300 people in Wuhan could already have been infected, based on a statistical model that extrapolated from international cases confirmed from Jan. 1 to 17.

The researchers said their model used a similar method to a Jan. 17 study by the Imperial College London, which placed the estimate at around 1,700.

Aneesh Mehta, a virologist at the Emory University School of Medicine, expressed concerns that the coronavirus is “showing the hallmarks … similar to previous outbreaks” such as SARS (severe acute respiratory syndrome) and MERS (Middle East respiratory syndrome), which led to a global spread.

Furthermore, given that patients may not seek medical help right away when their symptoms are mild, it’s “very possible there will be more cases than what have been discovered,” he said.

Laurie Garrett, a health policy analyst and formerly a Pulitzer-winning journalist for her coverage of the 1995 Ebola outbreak, said the figures from Chinese authorities are likely “a gross understatement” of the actual situation.

“Wuhan is definitely freaking out,” she said, as seen by the authorities’ recent attempts to control the outbreak.

She believes Chinese authorities mishandled the initial response to the outbreak, fueling its current spread. “The kind of alert and alarm that should have been out did not go out until now,” she said.

The first patient contracted the virus on Dec. 12, but Wuhan authorities did not confirm the case until Dec. 31.