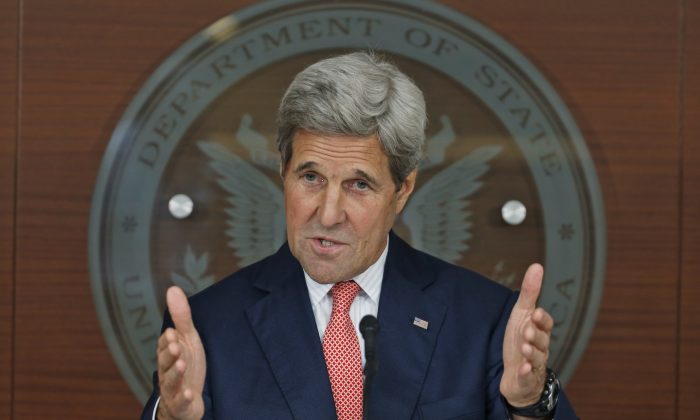 In this July 12, 2016, photo, Secretary of State John Kerry speaks at the Washington Passport Agency in Washington. Frustrated by months of failure in Syria, the U.S. is taking what might be its final offer to Russia. Officials say Moscow would get long-sought intelligence and military cooperation to fight the Islamic State and other extremist groups, if Syria’s Russian-backed leader upholds a ceasefire with U.S.-supported rebel groups and starts a political transition. Kerry, who will travel to Moscow later this week, has spoken of an August deadline for Syria’s transition to begin. (AP Photo/Alex Brandon)
International

US Boosts Aid to Syria War-Affected by $439 Million

WASHINGTON—The Obama administration says it will provide another $439 million in humanitarian aid to refugees and others affected by the ongoing conflict in Syria.

Secretary of State John Kerry announced the additional assistance on Tuesday at a State Department reception to mark the end of the Muslim holy month of Ramadan. The new contribution will bring total U.S. humanitarian aid for Syria to $5.6 billion since the start of the crisis in 2012.

The money will go to fund programs run by the U.N. and other relief agencies in at least six nations, including Syria, Lebanon, Jordan, Turkey, Iraq and Egypt.