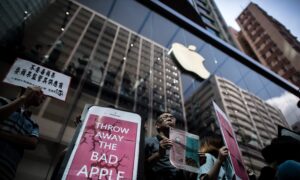 Cathy He
China Reporter
Cathy He is a New York-based reporter focusing on China-related topics. She previously worked as a government lawyer in Australia. She joined the Epoch Times in February 2018.
View profile
biggersmaller
Print

The United States has banned imports of a key material to make solar panels from a Chinese company as part of a wider effort to protect U.S. supply chains from forced labor inflicted on ethnic Muslim minorities in China’s Xinjiang region, the White House announced on June 24.

U.S. Customs and Border Protection has issued a “withhold release order” to detain shipments of silica-based products, a raw material used for solar panel production, made by Xinjiang-based Hoshine Silicon Industry Co. Ltd. and its subsidiaries.

Additionally, the Commerce Department has added five Chinese organizations to a trade blacklist over their use of forced labor in Xinjiang or otherwise aiding Beijing’s rights abuses in the region, including Hoshine Silicon Industry, three other Xinjiang-based Chinese companies linked to the production of raw materials and components for the solar industry, and the Chinese regime’s paramilitary body Xinjiang Production and Construction Corps.

About 45 percent of all polysilicon used in solar module production is produced in Xinjiang, with 35 percent produced in other parts of China. The remainder comes from outside of China.

The Labor Department will also update its list of goods known to be produced by forced labor to include polysilicon from China in an effort to put pressure on U.S. solar manufacturers to divest from Chinese components in their supply chains.

“These actions demonstrate our commitment to imposing additional costs on the People’s Republic of China (PRC) for engaging in cruel and inhumane forced labor practices and ensuring that Beijing plays by the rules of fair trade as part of the rules-based international order,” the Biden administration said in a fact sheet.

Chinese companies such as Hoshine are “profiting from these abuses,” Department of Homeland Security Secretary Alejandro Mayorkas said at a June 24 press conference, noting that these firms are “attempting to sell cheaply made goods to consumers in the United States and in other countries.

“That is unfair to law-abiding businesses that respect international labor standards. It is also unfair to consumers who may unwittingly purchase goods made in conditions of modern-day slavery,” he said.

The Chinese communist regime is engaging in a sweeping campaign of repression against Uyghurs and other Muslim minorities in Xinjiang. More than 1 million ethnic Muslim minorities have been detained in a network of internment camps in the region, where they’re subject to forced labor, torture, sexual violence, and political indoctrination. The United States and other countries’ parliaments have declared the campaign a genocide.

Those well-documented allegations of systemic abuses are routinely denied by Beijing.

The Biden administration’s announcement forms part of a broader global effort to root out forced labor from supply chains, with leaders of the Group of Seven nations committing to taking action to do so earlier this month. The United States has already banned the import of all cotton and tomato products from Xinjiang over forced labor.

Hoshine Silicon Industry said on an interactive investor platform that it backs the Chinese foreign ministry’s reaction, noting that the firm doesn’t export industrial silicon to the United States directly and that the effect on its business would be limited.

Cathy He
China Reporter
Cathy He is a New York-based reporter focusing on China-related topics. She previously worked as a government lawyer in Australia. She joined the Epoch Times in February 2018.
CathyHe_ET
TOP NEWS