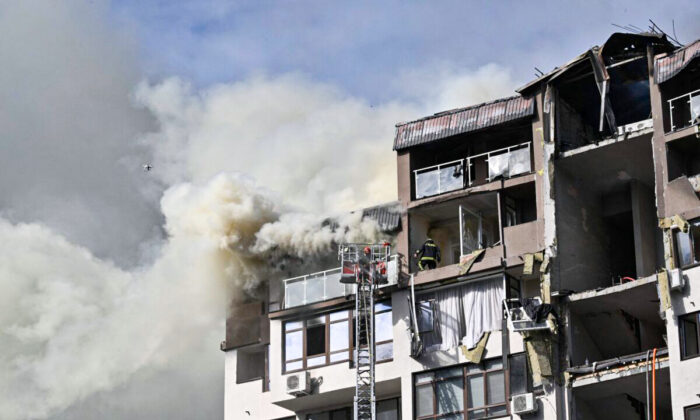 Rescuers and firefighters work in a damaged residential building, hit by Russian missiles in Kyiv on June 26, 2022, amid Russian invasion of Ukraine.(Genya Savilov/AFP via Getty Images)
US-China Relations

The Biden administration has added five Chinese companies to its economic blacklist for allegedly supporting Russia’s military and defense industrial base, blocking them from U.S. technology.

The U.S. Department of Commerce said in a June 28 statement that the companies had supplied ties to Russian “entities of concern” before Moscow launched its attack on Ukraine on Feb. 24 and “continue to contract to supply Russian entity listed and sanctioned parties.”

“Today’s action sends a powerful message to entities and individuals across the globe that if they seek to support Russia, the United States will cut them off as well,” Alan Estevez, undersecretary of commerce for industry and security, said in the statement.

The Commerce Department placed a total of 36 entities from nine countries on the “entity list,” effectively restricting U.S. companies from exporting or transferring products or technology.

The action comes amid growing concern among Western officials over the burgeoning alliance between Beijing and Moscow since Chinese leader Xi Jinping and Russian President Vladimir Putin first announced a “no limits” partnership on Feb. 4.

Since the Ukraine invasion, Beijing has repeatedly refused to condemn Moscow’s attack, despite growing calls from the United States and its allies.

Western officials have warned that Beijing had signaled intent to provide Moscow with economic and military aid for its war effort. That prompted President Joe Biden to warn Xi during a March video call of unspecified “consequences” should the Chinese regime support Russia’s military.

National security adviser Jake Sullivan told reporters on June 28 that Washington’s priority with Beijing regarding the war in Ukraine is to ensure that the regime doesn’t provide military equipment to Russia.

“No. 2 is that they not engage in wholesale or systematic undermining or evasion of U.S. sanctions,” he said en route to the NATO summit in Madrid.

“Thus far, we have not seen China act in a way inconsistent with those two principles and certainly not at scale with respect to the economic relationship.”

The announcement marks the first time the Biden administration placed Chinese businesses on the blacklist for aiding Russia’s war effort since the February invasion.

The Commerce Department also called out two Chinese entities that have been on the entity list since 2018 for “having supported, and continued to support” Russia’s military since the invasion of Ukraine. The two companies are China Electronics Technology Group Corp. 13th Research Institute (CETC 13) and its subordinate institution, Micro Electronic Technology in China. Both are part of the state-owned defense conglomerate CETC.

Commerce officials didn’t specify what the Chinese businesses had done. The move came after Commerce Secretary Gina Raimondo warned in March that Chinese companies could be “essentially shut” down if they contravened U.S. sanctions against Russia by supplying Moscow with chips and other supplies.

The Chinese regime has refused to join international sanctions against Russia over the invasion of Ukraine. It has consistently taken the position that global financial actions against Russia are invalid, thus providing Russia with a vital economic lifeline in Chinese markets.

Beijing continues to heavily censor talk of the war on social media in mainland China and declines to refer to it as a “war” or “invasion,” parroting Moscow’s stance that it is a “special military operation.”

Washington has vowed to closely monitor compliance and enforce the regulations.

“We will not hesitate to act, regardless of where a party is located, if they are violating U.S. law,” said Assistant Secretary of Commerce for Export Administration Thea Rozman Kendler.

Andrew Thornebrooke and Reuters contributed to this report.