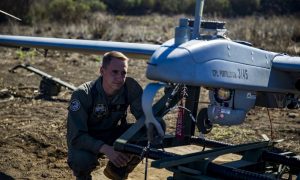 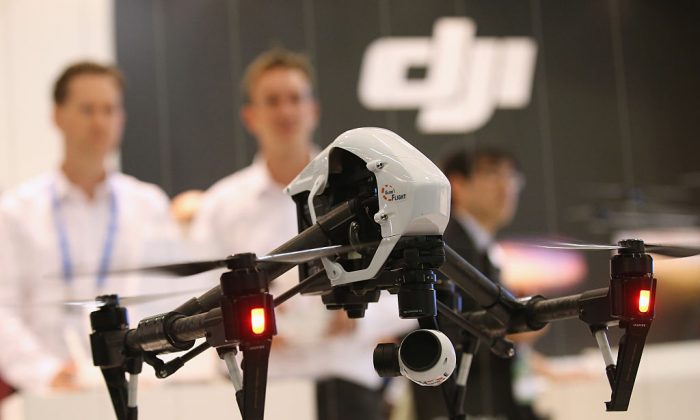 A bipartisan group of senators is seeking to prevent national security risks associated with drones made in China by prohibiting the U.S. government from procuring them.

Named the American Security Drone Act of 2019 (S.2502), the bill introduced on Sept. 18 would ban federal departments and agencies from buying any commercial off-the-shelf drone or small unmanned aircraft systems (UAS), either manufactured or assembled in countries deemed a national security threat to the United States. China was named among those countries, as well as Iran.

“China is STEALING our technology and intellectual property, yet the U.S. Government continues to buy critical technology, like drones, with American tax dollars from Chinese companies backed by their government,” Sen. Rick Scott (R-Fla.) said in a statement from his office.

“Like it or not, drones are our future. Without Congressional action, adversaries like China and Iran will use drone technology as tiny Trojan Horses to spy on our government, our critical infrastructure—even our hospitals and homes,” Blumenthal said in the release.

The bill would also ban federal funds from being awarded to contracts, grants, or cooperative agreements that would be used to purchase the drones.

In addition, the Comptroller General, who is the head of the Government Accountability Office, would be required to submit a report to Congress, detailing the current amount of such drones in the possession of U.S. federal departments and agencies.

Federal officials would need to stop using those drones within 180 days after the bill’s enactment.

“Chinese companies routinely steal and provide information to Beijing’s military and intelligence apparatus, and DHS [Department of Homeland Security] recently warned of the threat posed by Chinese-manufactured unmanned aerial systems and components,” Rubio said, according to the statement.

In May, the DHS issued an industry alert about Chinese-manufactured drones, warning that data from the machines could be compromised.

“The United States government has strong concerns about any technology product that takes American data into the territory of an authoritarian state that permits its intelligence services to have unfettered access to that data or otherwise abuses that access,” the notice stated.

Meanwhile, the Department of the Interior (DOI) is a frequent user of non-military drones for missions such as supporting wildland firefighting, inspecting and mapping of dams and aircraft accidents, and monitoring volcanic activities.

According to a July 2019 report on the DOI’s drone usage, its nine bureaus—the National Park Service and U.S. Geological Survey among them—conducted 10,342 drone flights in 42 U.S. states and territories in 2018, with its fleet of more than 600 available drones and 400 drone operators, who were certified by the Federal Aviation Administration (FAA) and trained by DOI.

Among DOI’s fleet of drones are those made by China’s DJI, which has dominated much of the world’s drone market for years.

Research firm Skylogic, in a 2018 market report, said that 79 percent of commercial drones operating in Canada and the United States are manufactured by DJI. On the global market, DJI’s share stood at 74 percent.

Local authorities in the United States also rely on DJI drones. According to a 2018 report by the Center for The Study of the Drone at Bard College, at least 910 state and local police, sheriff, fire, and emergency services agencies in the United States use drones, with 523 of them having purchased at least one drone from DJI. That information is based on local news reports, official records such as FAA aircraft regulations, and local government minutes and publications.

Citing government documents, Voice of America reported on Sept. 17 that the U.S. Navy spent about $190,000 and the Air Force $50,000 on DJI drones between August and November 2018. Neither agencies revealed details about the purchases.

DJI, a private company, has received millions of dollars worth of subsidies from the Shenzhen City government in southern China, where the company is based.

In a statement regarding the U.S. bill, DJI officials told the Wall Street Journal: “banning or restricting the use of drone technology based on where it is made is fear-driven policy, not grounded in facts or reality.”

At a press briefing on Aug. 26, the U.S. Undersecretary of Defense for Acquisition and Sustainment Ellen Lord spoke about the need to build a U.S. drone-manufacturing industry, as the “entire U.S. [drone] market” has been “eroded” by cheap Chinese items.

“We don’t have much of a small UAS industrial base because DJI dumped so many low-price quadcopters on the markets. And we then became dependent on them, both from the defense point of view and the commercial point of view,” Lord said, referring to drones propelled by four rotary blades.

She warned: “We know that a lot of the information is sent back to China from those. So it’s not something that we [the United States] can use.”

Lord added that in May, the Pentagon unveiled a program called the “Trusted Capital Marketplace” (TCM), to encourage investment from private capital investors into the defense industry. TCM would first focus on attracting investments into the small-drone industry, she said.

Concerns about Chinese drones are included in the language of both the Senate and House versions of an annual defense spending bill, the National Defense Authorization Act. A provision is included to prohibit the Department of Defense from operating or procuring Chinese-made drones.

Both versions have been approved; the chambers will now reconcile differences in their legislation to produce a compromise bill.