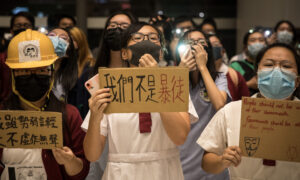 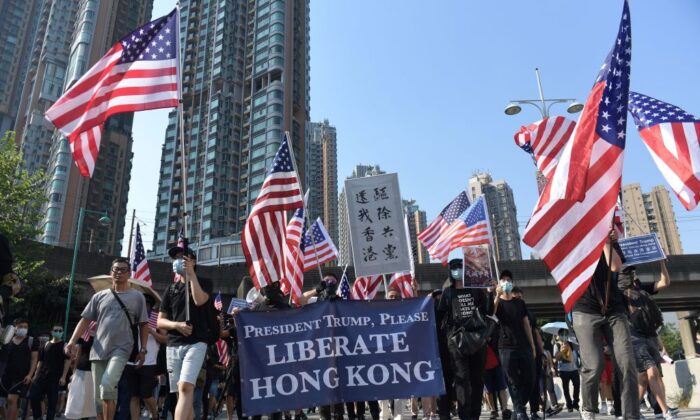 The full U.S. Senate and House of Representatives may soon vote on measures to support Hong Kong’s autonomy and basic law after two bipartisan bills for a Hong Kong Human Rights and Democracy Act were passed by congressional committees on Sept. 25.

Bill H.R. 3289, which Hong Kong protesters have been petitioning the U.S. Congress to pass as a means of safeguarding their basic rights, was unanimously passed by the House Foreign Affairs and the Senate Foreign Relations committees.

Bill co-author Rep. Chris Smith (R-N.J.) told the Chinese version of The Epoch Times that the House is expected to vote on its version of the bill in the second half of October, when lawmakers return from a two-week recess starting later this week.

ICYMI:@HouseForeign just marked up & passed my #HongKongHumanRightsandDemocracyAct out of committee!

As the author of this bipartisan legislation, I am working with my colleagues to ensure expeditious passage by the full House of Representatives. pic.twitter.com/v8bLTlW8eh

The Senate’s bill, S.1838, will also be headed for a floor vote in coming weeks.

“For months now the world has witnessed the bravery of tens of thousands of pro-democracy protesters in Hong Kong whose quest for autonomy and democracy has been beaten back with brutal force,” said Sen. Ben Cardin (D-Mary.), according to a press release by Sen. Marco Rubio’s (R-Fla.) office.

“Our bill sends a strong message that Congress and the people of the United States stand in solidarity with them,” Cardin said.

Protests in Hong Kong are now in their 16th week, after millions took to the streets in June to protest the local government’s controversial extradition bill, which many fear would erode the city’s autonomy.

If passed, the extradition bill would have allowed Beijing to request the Hong Kong city government to turn over suspects—both local residents and international travelers—to be put on trial in courts controlled by the Chinese Communist Party.

I am proud @SenateForeign today passed the #HongKongHumanRightsandDemocracyAct. After more than 2 decades of broken promises it’s time we hold the CCP accountable for erosion of Hong Kong autonomy. We are all proud to stand with Hong Kongers in pursuit of fundamental freedoms.

Though the extradition bill was formally withdrawn by Hong Kong leader Carrie Lam in early September, protesters have continued to stage rallies and marches to call for greater autonomy from the Chinese regime.

At the same time, continued brutal tactics deployed by Hong Kong police against protesters have prompted protesters demands for an independent commission to investigate police conduct—as well as the petition for U.S. Congress to pass the proposed Hong Kong Human Rights and Democracy Act into law.

“Beijing continues to erode the autonomy that it had promised to Hong Kong in a legally-binding 1984 international treaty with Britain and under Hong Kong’s Basic Law,” said Rubio, according to the press release.

“I urge Congress to pass this bill and send it to the President for enactment so the United States and partner nations can hold China fully accountable for its ongoing efforts to undermine Hong Kong’s freedoms and autonomy.”

The bipartisan U.S. bill was first introduced in June. It would require the U.S. Secretary of State to annually certify that Hong Kong is “sufficiently autonomous” from Communist Party-ruled China to merit ongoing special treatment from the United States afforded to it under the 1992 U.S.–Hong Kong Policy Act.

This bill will send a clear message that the U.S. stands with the people of Hong Kong in their quest to maintain their self-governance & autonomy, safeguard their #HumanRights, exercise their democratic freedom, & determine their own future.

Under that act, the United States agreed to treat Hong Kong as a separate entity from the mainland in economic and trade matters even after the former British colony was handed back to China in 1997 after the signing of the 1984 Sino–British Joint Declaration.

If passed, the U.S. bill would also mandate the president to impose sanctions against foreign persons responsible for committing gross violations of human rights in Hong Kong, such as arbitrary detentions.

China’s Foreign Ministry Spokesperson Geng Shuang, in response to a reporter’s question about the progress of the U.S. bill, said that the United States has “roughly interfered with China’s internal affairs.”

#HongKong’s governance is not China’s internal affair. #China must fully abide by the terms & spirit of the 1984 Sino-British Joint Declaration, an int’l treaty. There are U.S. interests are at stake if Hong Kong’s autonomy & fundamental freedoms are further eroded. https://t.co/hUIiU3y4VP

The Hong Kong and Macao Affairs Office, Beijing’s highest agency for managing Hong Kong affairs, issued a statement on Sept. 26 saying that the United States had “added oil to the fire,” further inflaming the existing “chaos” in Hong Kong.

“The world fully expects that the Chinese government will honor its binding treaty, made with the British and registered with the United Nations, in which China commits to protect Hong Kong’s freedom, legal system, and democratic ways of life,” Trump said.

“How China chooses to handle the situation will say a great deal about its role in the world in the future. We are all counting on President Xi as a great leader.”

Hong Kong leader Carrie Lam’s community dialogue will begin on Sept. 26. It was announced on her Facebook page that the discussion, to begin at 7 p.m. local time at the Queen Elizabeth Stadium in Wan Chai, will be broadcast live on the city government’s news Facebook page.