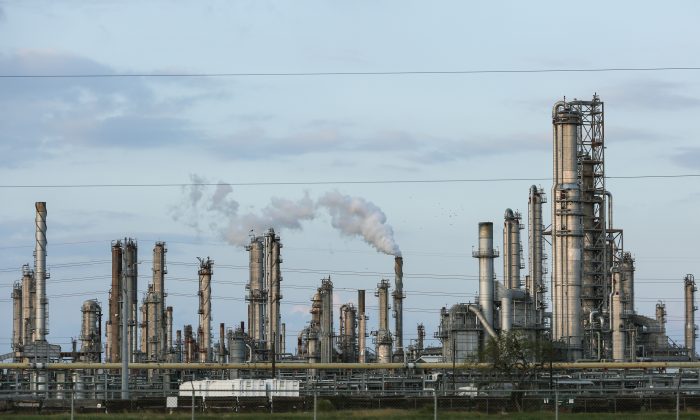 US Becomes Net Oil Exporter for First Time in Decades

The United States became a net oil exporter last week for the first time in almost 75 years, a significant step toward achieving “energy independence and dominance,” as promoted by President Donald Trump.

The United States had been a net oil importer since 1949. In the last week of November, however, weekly U.S. net imports of crude oil and petroleum products fell to minus 211,000 barrels per day (bpd), meaning the country became a net exporter of that amount, according to data from U.S. Energy Information and Administration.

The news came on the back of a surge in crude exports to a weekly record of more than 3.2 million bpd.

U.S. petroleum net imports peaked in 2005, reaching over 14 million bpd. It has declined gradually since then, falling to an average of 2 million bpd in recent months. This trend was the result of many factors, including increased domestic production of crude oil and hydrocarbon gas liquids.

U.S. oil production has more than doubled since 2012 because of the shale revolution, which started with the development of new technologies in oil extraction.

In the past half-century, the Organization of the Petroleum Exporting Countries (OPEC), led by Saudi Arabia, had largely dictated the oil markets. The rise of U.S. shale production, however, recently changed the dynamics.

The shale revolution has transformed the United States into the world’s largest petroleum producer, surpassing Russia and Saudi Arabia in recent months.

The International Energy Agency said in its latest World Energy Outlook that the United States will be the biggest contributor to the oil market, accounting for almost 75 percent of global oil production growth in the period to 2040.

The news about the United States becoming a net oil exporter was largely ignored last week, as markets were obsessed with the OPEC meeting in Vienna.

“While there is so much focus on the drama in the OPEC cartel, the real historic news that went unnoticed was that the United States last week exported more crude oil and fuel than it imported for the first time on record,” Phil Flynn, analyst at Price Futures Group in Chicago, wrote in an email.

“So now the United States can join the community of exporting nations as opposed to consuming nations, at least this week.”

OPEC members and Russia agreed to cut oil production Dec. 7 after a two-day meeting in Vienna, rebuffing Trump’s call for higher output and lower oil prices. Saudi Arabia, Russia, and the rest of the OPEC nations announced to cut oil output by 1.2 million bpd for the first six months of 2019.

According to the agreement, the 15-member OPEC cartel will reduce output by a total of 800,000 bpd, while non-OPEC producers, led by Russia, committed to another 400,000 bpd cut.

Trump has repeatedly demanded that OPEC and Saudi Arabia push prices down. A day before the OPEC meeting, Trump sent another message to the cartel via Twitter.

“Hopefully OPEC will be keeping oil flows as is, not restricted. The World does not want to see, or need, higher oil prices!” he wrote on Dec. 5.

The agreement is only for six months, and the cartel will review the supply-demand balance again in April 2019, according to the reports.

Iran was a major holdout within OPEC during the talks, seeking an exemption from the cuts, which was initially turned down by Saudi Arabia. In the end, Tehran got a verbal assurance that it would be exempt, according to a Bloomberg report. Venezuela and Libya also got exemptions.

Oil prices have nosedived since peaking in early October amid fears of a potential supply glut and cooling global demand. Crude prices have slid nearly 30 percent from their highs.

To prevent a further slide in oil prices, Saudi Arabia’s Minister of Energy Khalid Al-Falih announced last month plans to cut production. Russian Energy Minister Alexander Novak, however, was more cautious about cuts, saying that “the market is in the stage of a good balance” because of temporary waivers for Iran oil.

In November, Trump reinstated economic sanctions on Tehran but granted waivers to eight countries for oil imports from Iran to prevent a spike in oil prices. Oil prices sold off sharply following the news of exemptions. The market’s initial expectation was a more dramatic decline in global supply with fears of potentially zero Iranian exports.

The recent slump in oil prices is good for U.S. households. However, too low of a price may hurt U.S. shale oil producers in the long run. Low prices may lead to a slowdown in drilling activity and lower investments in the shale patch, according to experts.

The production cuts by OPEC and Russia will bring oil inventories back to their 5-year average level, Goldman Sachs analysts said in a report.

“We forecast Brent prices back slightly above $70 per barrel in early 2019—a price level consistent with normalized inventories, but not high enough to overstimulate shale drilling activity,” the report said.