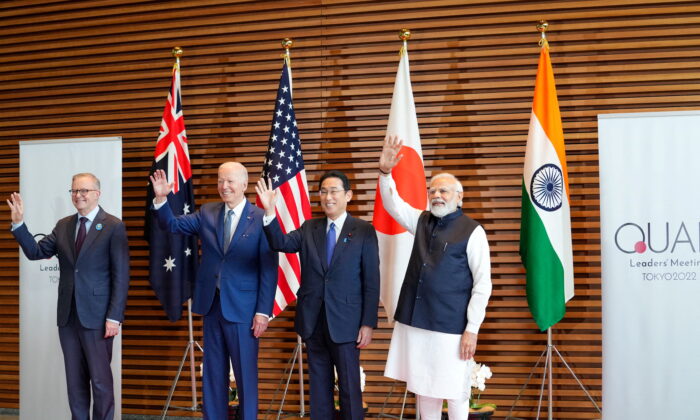 According to experts, bilateral trade between the United States and India is poised to increase further as the nations seek to strengthen ties.

Since India is home to 1.4 billion people with the fastest growing economy and the third-largest consumer market in the world, it offers tremendous business opportunities for U.S. and Indian firms, Rakesh Mohan Joshi, director of the Indian Institute of Plantation Management (IIPM) in Bangalore, said in an interview with Business Standard.

Indian Prime Minister Narendra Modi called his country’s relationship with the United States a “partnership of trust” during his meeting with President Joe Biden in Tokyo on May 24.

“I am confident that the friendship of India and America will continue to be a force for good for global peace and stability, for the sustainability of the planet, and for the well-being of mankind,” Modi said, according to Press Trust of India.

To further strengthen ties with India and Indo–Pacific nations, the Biden administration initiated the Indo–Pacific Economic Framework for Prosperity (IPEF) on May 23.

In addition to India, other nations in the program include Japan, Australia, Brunei, Indonesia, South Korea, Malaysia, New Zealand, the Philippines, Singapore, Thailand, and Vietnam. Together, the countries in the program represent 40 percent of global gross domestic product.

The White House says the IPEF will allow the United States to decide rules to ensure that U.S. small businesses, workers, and researchers can compete in the Indo–Pacific region.

Trade with the Indo–Pacific region supports 3 million U.S. jobs and brings in $900 billion in foreign investment into the country, the White House said. U.S. foreign direct investment in the region was $969 billion in 2020.