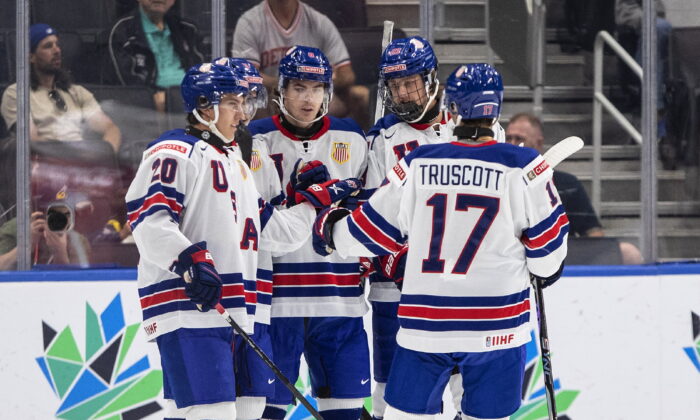 EDMONTON, Alberta—Wyatt Kaiser and Carter Mazur each scored twice and the United States beat winless Austria 7–0 on Saturday to improve to 3–0 in group play in the world junior championship.

“We knew we had to get off to a good start today,” U.S. coach Nate Leaman said. “Our schedule was different today, and it was important for us to adjust quickly. I’m happy with how the team started the first period and kept it rolling.”

The U.S. will finish Group B play Sunday against Sweden.

At night, Canada beat the Czech Republic 5–1 to improve to 3–0 in Group A. Captain Mason McTavish scored twice, Kent Johnson had a lacrosse-style goal and added an assist, Greig Ridly and Tyson Foerester also scored and Dylan Garand made 22 saves.

“I’ve been practicing that move since I was like, 14, and doing it,” Johnson said. “Now it’s just something that’s kind of in the tool box.”

In the late game, Germany beat Switzerland 3–2 in Group B.