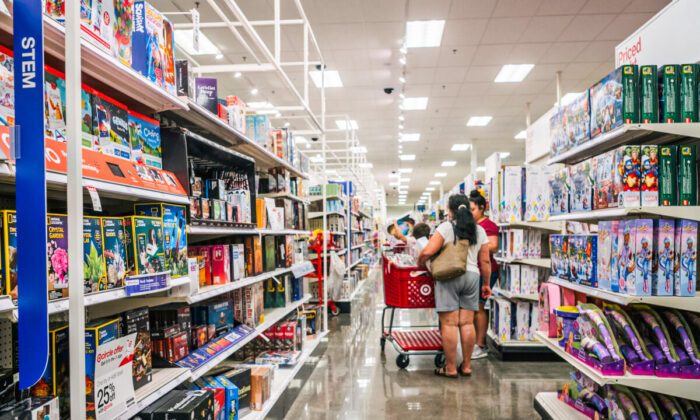 A family shops for toys at a Target store in Houston, Texas, on Oct. 25, 2021. (Brandon Bell/Getty Images)
Businesses in COVID-19

With global shipping logistics resembling a harried crow’s nest these days, toy manufacturers with domestic operations are happily producing and delivering goods, tangle free. Moreover, many are expanding their facilities and increasing levels of production. Meanwhile, toy companies with overseas production arrangements battle delays and rising costs, which may impact the number of foreign-made gifts under the trees in homes throughout the country this year.

The trend to manufacture toys stateside encompasses large and small-scale producers alike. Toward the high end of the scale, Cra-Z-Art, which is powered by LaRose Industries, is upping the number of its products that are made within U.S. borders. Cra-Z-Art currently has the largest pencil factory in America, and the New Jersey-based company touts more than one million square feet of space in Florida and Tennessee.

Its newest manufacturing facility is located in Jacksonville, Florida, and will help meet growing demand for its products. Cra-Z-Art produces toys, craft kits, and art and school supplies, including Softee Dough, Cra-Z-Slimy, Cra-Z-Loom, and The Real Cotton Candy Maker.

“Cra-Z-Art is very excited to be expanding and opening up another great, new production operation,” Lawrence Rosen, chairman of Cra-Z-Art, stated in a press release regarding the new 315,000 square foot plant in Jacksonville, Florida. “In response to our rapid growth, this second facility will allow us to substantially increase capacity and more effectively and efficiently get our products to market for consumers to enjoy.”

In a global manufacturing scene, staying close to home aligns with the company’s overarching goals. “We are once again increasing production of our quality goods that are made right here in the U.S.A., which will ultimately contribute to the local economy of the Jacksonville region and beyond,” Rosen added.

Smaller players are jumping onto the domestic manufacturing rungs also.

In 2006, Sheila Duncan, president of Larkin Ltd. in Marblehead, Massachusetts, saw a drawing her niece, who was 12 years old at the time, had made after a number of family cancer losses. The drawing served as an inspiration to what eventually became Trouble the Dog, a plush children’s character used for comfort and therapy. When she was ready to move into the production phase, Duncan ordered about 1,500 plush versions of Trouble the Dog from an overseas manufacturer. After the first order, she experienced several difficulties with the overseas operations.

“It was difficult to communicate,” she recalled in a conversation with The Epoch Times, as e-mails would be sent out at different time zones and the materials used in subsequent orders of Trouble the Dog weren’t the same as the ones in the first round.

Duncan decided to explore U.S.-based options. The path to domestic production was far from easy, as some manufacturers weren’t interested in working with a small company and orders for smaller amounts than what large toy companies typically request. Costs were higher in the United States as well, but Duncan persisted and eventually came into contact with the American Bear Factory in Phoenix, Arizona.

“The owner of American Bear Factory spent time on the phone with me and together we figured out a way to accomplish this goal,” Duncan said. “The advantage is being able to pick up the phone and speak live.”

The ease of communication made a world of difference for Duncan, and today, every part except the silver material for the special dog is sourced domestically.

“We’re proud to be made in America and happy to know that Trouble the Dog is comforting so many kids during this difficult time,” Duncan added.

One of these children, Darius Noonan, received Trouble the Dog while spending time in foster care. He was later adopted, and is now on a mission to give this comfort toy to other kids in need.

For Sprout Design Lab, which turns children’s artwork and handwriting into custom jewelry, the speed of production is perhaps the biggest draw to operating in the United States. The company was founded by a small team of female engineers in Charleston, South Carolina.

“We began operation in October 2020 and have kept all aspects of our business—design, fabrication, assembly, and shipping—in the U.S.A.,” Jade Brown, founder at Sprout Design Lab, told The Epoch Times. “Many jewelry companies estimate 8 to 10 weeks for custom pieces, but our average turnaround time is two weeks.”

Operating at a local level allows the company to avoid shipping delays, cargo issues, and holdups at customs that are so often associated with overseas production. “Staying in the U.S. also allows us to have continued oversight over the quality of our products,” Brown explained.

“Each custom piece gets inspected multiple times by our team before it’s shipped. Operating overseas wouldn’t allow us this continued oversight and could potentially lead to quality misses and a negative customer experience.”